The God of Abraham (RJS)

We worship the same God. 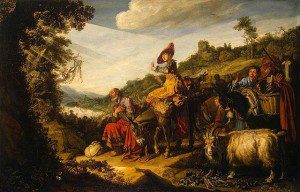 We are in the midst of a series of posts on the book of Genesis, considering a number of different commentaries. In the primeval history of Genesis 1-11, as indeed in much of Genesis, God is the primary actor. Genesis isn’t so much a story of human origins or the origins of Israel as it is a story of God’s mission. The origins of God’s work with his people. Because of this the most important part of Genesis, and the reason the book is worth an extended series, is not found in the primeval history of Genesis 1-11, but in the call of Abraham and of Israel. (The image is a 17th century artist’s depiction of the journey of Abraham from Haran.)

The Christian story begins with the call of Abraham and the election of Israel as God’s people, a light to the nations.

The Lord had said to Abram, “Go from your country, your people and your father’s household to the land I will show you. “I will make you into a great nation, and I will bless you; I will make your name great, and you will be a blessing. I will bless those who bless you, and whoever curses you I will curse; and all peoples on earth will be blessed through you.” So Abram went, as the Lord had told him. … The Lord appeared to Abram and said, “To your offspring I will give this land.” So he built an altar there to the Lord, who had appeared to him. From there he went on toward the hills east of Bethel and pitched his tent, with Bethel on the west and Ai on the east. There he built an altar to the Lord and called on the name of the Lord. Genesis 12:1-8

Abraham will surely become a great and powerful nation, and all nations on earth will be blessed through him. For I have chosen him, so that he will direct his children and his household after him to keep the way of the Lord by doing what is right and just, so that the Lord will bring about for Abraham what he has promised him.” 18:18-19

A pledge reaffirmed to Jacob as he fled to his mother’s brother Laban.

Jacob left Beersheba and set out for Harran. … He had a dream in which he saw a stairway resting on the earth, with its top reaching to heaven, and the angels of God were ascending and descending on it. There above it stood the Lord, and he said: “I am the Lord, the God of your father Abraham and the God of Isaac. I will give you and your descendants the land on which you are lying. Your descendants will be like the dust of the earth, and you will spread out to the west and to the east, to the north and to the south. All peoples on earth will be blessed through you and your offspring. I am with you and will watch over you wherever you go, and I will bring you back to this land. I will not leave you until I have done what I have promised you.” 28:10-15

A pledge reaffirmed in the exodus of Israel from Egypt. God calls Moses referring back to Abraham, Isaac, and Jacob.

When the Lord saw that he had gone over to look, God called to him from within the bush, “Moses! Moses!” And Moses said, “Here I am.” “Do not come any closer,” God said. “Take off your sandals, for the place where you are standing is holy ground.” Then he said, “I am the God of your father, the God of Abraham, the God of Isaac and the God of Jacob.” At this, Moses hid his face, because he was afraid to look at God. Exodus 3:4-6 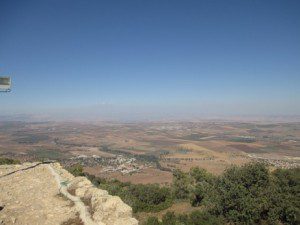 Jesus meets Moses with Elijah on the mount of transfiguration. The same Moses who served the God of Abraham, Isaac, and Jacob.

After six days Jesus took with him Peter, James and John the brother of James, and led them up a high mountain by themselves. There he was transfigured before them. His face shone like the sun, and his clothes became as white as the light. Just then there appeared before them Moses and Elijah, talking with Jesus. Peter said to Jesus, “Lord, it is good for us to be here. If you wish, I will put up three shelters—one for you, one for Moses and one for Elijah.” While he was still speaking, a bright cloud covered them, and a voice from the cloud said, “This is my Son, whom I love; with him I am well pleased. Listen to him!” Matthew 17:1-5

God, the Father of Jesus, is the God of Abraham, Isaac, and Jacob. The God who called Abraham, who formed Israel, who rescued them out of Egypt, who anointed David, who brought them back from exile is the God of the New Testament and the God we worship.

We worship the God of Abraham, Isaac and Jacob.  This shouldn’t be a controversial statement … but it is.   The same God controversy at Wheaton over the winter made this clear. Many Christians were willing go argue that because we worship the God revealed in Jesus (whoever has seen me has seen the Father Jn 14:9), only those who worship Jesus worship the same God. Therefore neither Muslims nor Jews worship the same God we worship. I have no desire to get into a discussion of Islam – I have no firm position on this. But any argument against the “same God” that leads also to the conclusion that Jews and Christians do not worship the same God strikes me as wrong and borderline heretical. There is a vast difference between seeing in part (certainly as Christians we do believe that the Jewish understanding of God is incomplete) and worshiping a different God. We, like the Jews, worship the God of Abraham, Isaac, Jacob, Moses, David, Elijah, and Isaiah.

Walter Moberly in his book The Theology of the Book of Genesis digs into this as he discusses Genesis 12-50.

From a Jewish perspective, perhaps the central issue in understanding Genesis 12-50 is posed by the normative, indeed definitive, nature of God’s self-revelation to Moses and Israel at Sinai/Horeb, together with the covenant making and gift of torah. If the norm for life with God is here, then how is Israel to understand those whose life with God is in some way of enduring significance – as Abraham and Sarah’s, Isaac and Rebekah’s, and Jacob and his twelve children’s clearly are – and yet who lived without torah, because torah had not yet been given? (p. 121-122)

Turns out that Jewish approaches include arguments that the patriarchs must have known torah. Moberly runs through a few examples, but concludes: “In one way or other, it is clear that the classic Jewish instinct is to handle the problem of the patriarchs’ pre-torah context by assimilating them into a torah context.” (p. 125)  From the perspective of Paul, who reads Genesis in the context of the life, death, and resurrection of Jesus, the pre-torah context of Abraham and the other patriarchs highlights the importance of faith over torah observance. Abraham believed God, and it was reckoned to him as righteousness.

The problem that Genesis poses for Jewish thinking is surely closely analogous to the problem posed by the Old Testament as a whole for Christian thinking. For those whose norms of faith and life focus on the knowledge of God in and through Jesus Christ, the Old Testament poses the same issues as does Genesis 12-50 for Mosaic torah: How does one relate continuity and identity to real and major difference? Christians down the ages have made the same kinds of moves in relation to the Old Testament that Jews have made in relation to Genesis. The predominant instinct has been to assimilate – more or less subtly – the unfamiliar to the familiar, the divergent to the normative. (p. 131)

Some have simply dismissed the Old Testament. Marcion, the second century Christian who rejected the Hebrew Scriptures entirely, is the extreme example here, but it is also seen in less extreme forms. Moberly cites both Luther (mild) and Bultmann (more severe) as examples. I recently read an evangelical pastor who argued that the church doesn’t need the Old Testament. We simply need Jesus.

Moberly also points out that a canonical reading of Genesis requires us to reckon with “the fundamental theological issue of revelation – that God is known by Israel (and Jews and Christians, subsequently) because God has revealed himself.” (p. 137) Historical-critical tools, including a religio-historical account of the ancient Near East, can be of use in understanding aspects of the text, but ultimately God’s self-revelation need not fit neatly into that picture. God revealed himself to Abraham in a context that allowed himself to be known, but somewhat differently from the way that he later revealed himself to Moses in the burning bush or on Mount Sinai. Likewise, the coming of Jesus in his life, death, and resurrection involves a deeper and more complete self-revelation of the same God. The God and Father of the Lord Jesus Christ is none other than YHWH, the God of Israel. YHWH the God of Israel is none other than the God who brought Abraham into Canaan from Ur of the Chaldeans.

May 12, 2016
Mary and Me and Complementarianism (by Ruth Tucker)
Next Post

May 12, 2016 Rio and Zika
Recent Comments
0 | Leave a Comment
Browse Our Archives
get the latest from
Evangelical
Sign up for our newsletter
POPULAR AT PATHEOS Evangelical
1

Rich and Poor?
Economists tell us how the economy goes, but God tells us how...
view all Evangelical blogs
What Are Your Thoughts?leave a comment
Copyright 2008-2020, Patheos. All rights reserved.