The Holiness Tradition and the New Perspective

The Holiness Tradition and the New Perspective May 16, 2016 Scot McKnight 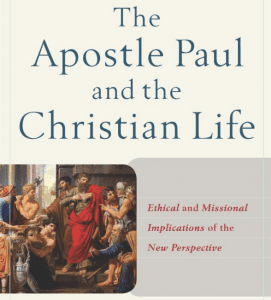 It is perhaps not as well known as it might be that James D.G. Dunn, who was the earliest driver for exploring the conclusions of E.P. Sanders’ famous Paul and Palestinian Judaism for the apostle Paul’s theology and mission, is a Wesleyan or a Methodist. Thus, his Pauline theology shows contact with the Holiness Tradition of Christian theology. N.T. Wright, on the other hand, is an Anglican so shows more contact with the Reformed Tradition of Christian theology. It must be emphasized, however, that both Dunn and Wright are NT scholars who are more than willing to put their theological traditions to the test of Scripture itself. Scripture in its historical, especially Jewish, context.

One of Northern’s students, Tara Beth Leach, a Nazarene (thus, Holiness Tradition), approached me to do an independent study how the Nazarene, Wesleyan and Holiness tradition would respond to the new perspective on Paul. Her work for the class opened up an opportunity for me to show it to my co-editor, Joe Modica (at Eastern University), for his scrutiny — and when Joe thought it was good enough for publication in our book I affirmed his judgment, having already come to that conclusion. So, our post today will focus on Tara Beth Leach’s chapter in the book you can see in the image for this post: The Apostle Paul and the Christian Life. Tara Beth drew three primary sources into discussion: the apostle Paul, the Nazarene-Holiness-Wesleyan tradition (including Wesley, Wiley) as well as Gordon Fee. She doesn’t speak for the whole of the Wesleyan or Nazarene tradition, but her essay will be one type of exploration for that tradition.

I have been around a number of Wesleyans who have said to me, “I was always ‘new perspective’ and never knew what it was!” I’ve been around others who say, “I am clearly ‘old perspective’ and that is what Wesley taught, too.” OK, they can argue amongst themselves but I have been more than curious over the years to watch how various traditions incorporate the new perspective, and now the apocalyptic theology, into their existing tradition. It is a pity that some in the Reformed tradition reacted so antagonistically to the new perspective — to be sure, some claims by some new perspective folks put them outside the margins of specific forms of Reformed dogmatics — because there is plenty of space here for dialogue and mutual benefit.

Now for something Northern Seminary is proud of: Tara Beth Leach has recently been called to be senior pastor at Pasadena, First Church of the Nazarene. Our prayers precede her arrival.

Leach sketches the Wesleyan tradition — including sections on original sin, prevenient grace, justification distinguished from sanctification, and then a good section on holiness and sanctification. Good choice quotations can be found in the chapter. But she continues then to show that the heart of holiness is love, something that I wish more who write about holiness would take note of because for far too many holiness means separation. The Wesleyans have always tied holiness to love. [Holiness can be defined, so I think, as love burning in one direction.]

At this point Leach moves into a challenge: that too often in the Holiness tradition holiness is restricted too much to the individual and is not shaped enough toward the church. That is, for some the ordo salutis is pure individualism. Leach contends the new perspective moves us to think of both love and holiness in terms also of the church. Here is a money quote:

God is love—love lived out through the power of the Holy Spirit in a community of gifted individuals playing one musical piece in different parts, a holy symphony. Holiness is life lived by people in the fullness of the Holy Spirit who are empowered to offer a drastic alternative to the world around them. Love is the melody running through the community, underneath the community, and all around the community. The Christian community is not a place of jarring instruments singing different songs, or a place of gossip, conflict, rejection, pain, strife, and hatred. It is a place where the Spirit’s fruit is present in abundance, so much so that the world around the Christian community can’t help but join the melody. It is a community that is so unified, so melodious, so beautiful that it stops others in their tracks. Those on the outside can’t help but peer in, and watch with awe and wonder, and notice the unity of the symphony. Instead of the emphasis being on the solo Christian striving to live a holy life, it is on a holy people,  a symphony. It is a collection of individuals all uniquely gifted, sometimes polarizing opposites, yet unified in the same symphony (166).

She then develops this in the following themes: walk by the Spirit, the fruit of the Spirit, the dying of exclusiveness, love, and edification. Read those sections, you’ll be blessed by the Nazarene tradition for it!

May 16, 2016 Day Jobs of 20 Famous Writers
Recent Comments
2 Comments | Leave a Comment
Browse Our Archives
get the latest from
Evangelical
Sign up for our newsletter
POPULAR AT PATHEOS Evangelical
1