A Sojourn in Egypt (RJS) 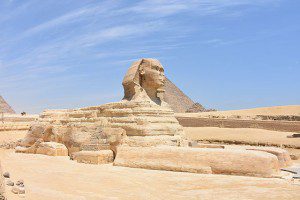 Sojourns in Egypt plays an important role in the sweep of Scripture running from the opening frames of the story of Abraham and the covenant promise in Genesis 12 through the early story of Jesus (Mt 2).

Abram obeyed the call of God and went to the land of Canaan with the promise that he would become a great nation there. But all was not milk and honey… or fertile pasture land and sheep. In fact, the land of Canaan was soon afflicted by a severe famine. Abram and his household fled to Egypt to survive, sometime between 2100 and 1700 BC, when the sphinx had already been around for hundreds of years. (Image Credit)

Now there was a famine in the land. So Abram went down to Egypt to reside there as an alien, for the famine was severe in the land. When he was about to enter Egypt, he said to his wife Sarai, “I know well that you are a woman beautiful in appearance; and when the Egyptians see you, they will say, ‘This is his wife’; then they will kill me, but they will let you live. Say you are my sister, so that it may go well with me because of you, and that my life may be spared on your account.” When Abram entered Egypt the Egyptians saw that the woman was very beautiful. When the officials of Pharaoh saw her, they praised her to Pharaoh. And the woman was taken into Pharaoh’s house. And for her sake he dealt well with Abram; and he had sheep, oxen, male donkeys, male and female slaves, female donkeys, and camels.

But the Lord afflicted Pharaoh and his house with great plagues because of Sarai, Abram’s wife. So Pharaoh called Abram, and said, “What is this you have done to me? Why did you not tell me that she was your wife? Why did you say, ‘She is my sister,’ so that I took her for my wife? Now then, here is your wife, take her, and be gone.” And Pharaoh gave his men orders concerning him; and they set him on the way, with his wife and all that he had.

So Abram went up from Egypt, he and his wife, and all that he had, and Lot with him, into the Negev.

This story of Abram’s sojourn in Egypt is important.  It is the first of three times a patriarch (Abraham twice and Isaac once) is reported as passing off his wife as his sister. This ruse strikes us in the 21st century as somewhat strange. The cultural context in which this maneuver makes sense simply isn’t clear. Much ink has been spilled in the attempt to reason through the significance of the maneuver and the relatedness of the three separate stories (they are not thought to be independent). The significance of our current story, however, does not lie in this ruse or in its relationship to the other two passages.

Abram’s household flees the land of Canaan in need, finds refugee in Egypt, gains in wealth – but needs to leave. The Lord afflicts Pharaoh with plagues and Abram leaves.  This is a mini-exodus story as is the latter journey of Mary, Joseph, and Jesus to Egypt and back.

Abram arrives in Egypt, either with or without God’s blessing. The story isn’t clear on this. Tremper Longman (Genesis in the Story of God Bible Commentary) suggests that the trip to Egypt signifies a lack of faith in God and his promises. Whether the trip itself carries such meaning, it is clear that Abram feels that he must trust to his own cunning for safety and prosperity in Egypt. As Longman puts it “He asks [Sarai] to suppress the most important part of his relationship with her for one and only one purpose, namely to save his own life. And not only that, but he plans to use her beauty in order to be “treated well.”” (p. 169)  This is no innocent ruse. He will be treated well, because as her brother he can negotiate a marriage for her!

It works – Pharaoh takes her into his palace and Abram is enriched in both livestock and servants. The text isn’t clear, Pharaoh may well have had relations with Sarai. Abram has treated his wife, the matriarch of God’s promise, as his property and for his own benefit.  But God’s promise is not so easily abrogated. The end result is God coming to the rescue, afflicting Pharaoh and his household with plagues. Abram and Sarai are sent away, substantially wealthier.

A foreshadowing? Elements of this story are familiar.  Bill Arnold comments that the story “has been edited in order to anticipate Israel’s subsequent exodus from Egypt, not only in despoiling the Egyptians, but also by Yahweh’s intervention and the sending of plagues.” (p. 138, Genesis)

Tremper Longman makes the connections more explicit. “Biblical history is never written for a purely antiquarian purpose; that is the authors are not interested in the past for the sake of the past.” (p. 171) The story was recorded in the form we have to provide meaning to the audience of the day. This could have been at the time of Moses, or later up to or around the time of the exile. Older sources were used, well known oral and written traditions, but they were shaped for a contemporary purpose. “The message that God delivers his people, even his sinful people from trouble, is a message that has relevance for the time of Moses, the time of the Babylonian exile, indeed for all time including today.” (p. 171)  Arnold places the dating of the composition of Genesis prior to the exile, but around this time.  Enns and Byas (Genesis for Normal People) place the final composition of the Pentateuch and thus the final shaping of Genesis around the return from exile. Longman doesn’t take a firm position on the date for the final composition of Genesis, but it was many centuries after the time of Abraham and may have been at the time of the exile.

“Genesis is not a series of pithy short stories with moral lessons, but a series of vital  stepping stones in the story of Israel’s beginnings.” (Enns and Byas p. 66)

The exodus theme, foreshadowed in Genesis 12, full blown in Exodus, is followed by a second exodus theme that runs through the prophets. It seems likely that the foreshadowing of the exodus in Genesis 12 as the story is told in the final version of Genesis, is an intentional literary device for a purpose.  Bookends so to speak.

As Christians we can take this theme even further. The second exodus theme continues into the New Testament.

The message of the New Testament is that the ultimate fulfillment of the second exodus expectation, plus the most powerful expression of the fact that God rescues his people, takes place in the work of Jesus Christ who saves his people from sin, guilt, and death. That Jesus’ life and ministry follows the pattern of the exodus story is signaled by the opening of the Gospel of Mark, quoting Isaiah and Malachi’s oracles that looked forward to a second exodus. …

Those who have a good knowledge of the exodus tradition will see the multiple connections often highlighted by the Gospel writers, particularly Matthew. Due to Herod’s persecution, Joseph and Mary take Jesus to Egypt when he is a youth. When Herod died, Jesus returned and the Gospel writer cites Hosea 11:1, “out of Egypt I called my son.”

The baptism of Jesus, the forty days in the wilderness, the culmination in his death as the Passover lamb. Jesus is the fulfillment of the exodus.

What message(s) do you take from the sojourn of Abram in Egypt?

June 21, 2016 New Parents and Happiness
Recent Comments
1 Comment | Leave a Comment
Browse Our Archives
get the latest from
Evangelical
Sign up for our newsletter
POPULAR AT PATHEOS Evangelical
1