A Day in the Life of Adam and Eve (RJS) 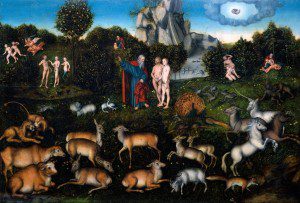 ark Whorton in Peril in Paradise accepts Adam and Eve as real people, the progenitors of the human race, but this still doesn’t lead to a young earth or a perfect paradise in the garden of Eden. Nor does it mean that death entered creation with the sin of the pair. Whorton makes a number of the same points we’ve seen in the past and adds some new insights as well.

God did not create mature trees in the garden but rather “out of the ground the Lord God caused to grow every tree …” God certainly could have created mature trees or miraculously accelerated the growth of the garden, but the Bible does not say He did that. Proper exegesis and a plain reading of the passage suggest that god planted the garden using normal providence. p. 84

Normal providence to grow as we would expect a garden to grow today and as the original ancient Israelite audience knew that gardens grew. Normal providence of soil, rain, sun, and time is the way God makes things grow. There he placed the man he had formed and brought animals he had formed.  There is no reason, Whorton suggests, to suppose that all animals were brought to the garden. Rather those suitable to the place.

God prepared a special place for Adam that was distinct from the rest of the earth. Much like a nature preserve or a zoological park, Eden was an ideal habitat that was set apart as the abode for God’s image bearers. (p. 85)

Thorns and carnivores may have been excluded from the garden, but not absent from the world. Certainly the image we have in Genesis 2 is one where such was the case.  The original ancient Israelite audience would have understood this about the garden from the text. John Walton’s illustrated background commentary on Genesis provides some interesting background on the cultural context. Comparative studies suggest that the Hebrew word “Eden” links to an Aramaic word that means “to enrich, make abundant.” The garden is well watered and beautiful, adjacent to Eden from where the water flows.

The garden adjoins God’s residence in the same way that a garden of a palace adjoins the palace. Eden is the source of the waters and the residence of God. The text describes a situation that was well known in the ancient world: a sacred spot featuring a spring with an adjoining well-watered park, stocked with specimens of trees and animals. (Walton p. 28 in the full five book version)

And in a featured discussion on Garden Parks in the Ancient Near East:

The word “garden” here should not make us think of vegetables or even necessarily flowers. Public gardens or a “country garden” convey the idea more accurately as indicating a park with careful landscaping, pools, watercourses and paths winding among fruit trees and shade trees. Such arboretums, sometimes even containing animals of various sorts, were a common feature of palace complexes in the ancient world.

Kings boasted of large parts of cities devoted to these parks, of great irrigation works that fed them, and of the distant lands from which the plants and animals were gathered. …

The garden is sacred space specially prepared for God’s image bearer – a limited location on earth. 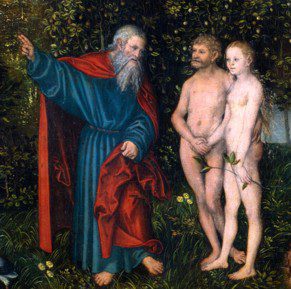 Second, God sets a choice before Adam. “And the Lord God commanded the man, ‘You are free to eat from any tree in the garden; but you must not eat from the tree of the knowledge of good and evil, for when you eat from it you will certainly die.'” This is a foreshadowing of the choice set before Israel in Deuteronomy 11 with both a blessing and a curse.

The potential for Adam to choose disobedience indicates that the created world was fashioned to allow free will and temptation. Evil was real, and evil was a choice. God had chosen to allow evil in the material world because it already existed in the heavenly realm. God could have chosen to prevent evil in the creation, but that was not his plan. (p. 87-88)

For the curse to have meant anything Adam must be supposed to understand the concept of death. Immortality, apart from the sustaining grace of God, was unknown even in the garden. Whorton isn’t emphatic on the mortality or immortality of Adam, but the mortality of animals in general seems implied. Adam knew what death was. It seems likely that the text also implies that immortality is not natural, but a divine gift.

The Tree of Life symbolically represents the provision of life given by God to those who appropriate it according to his requirements. In exactly the same way, we appropriate God’s gift of eternal life by receiving the life given through Christ. (p. 89)

This isn’t a new proposal. Whorton notes, as I’ve noted before, that even John Calvin taught that Adam was not immortal. The garden wasn’t intended to be forever. It was a starting point for a larger purpose.

Third, the purpose included a mandate for dominion. In Genesis 1:28 the first humans are instructed: Be fruitful and multiply, and fill the earth and subdue it; and have dominion over the fish of the sea and over the birds of the air and over every living thing that moves upon the earth. The command to subdue implies resistance in a less than perfect ordered world. These humans (Whorton presumes Adam and Eve) were going to have to work to overcome resistance to fill and subdue the earth. Humans were created with a job to do.

Tornadoes are the natural result of the laws of thermodynamics combined with geography and the atmosphere. … So what would a world be like without these storms? For there to be no stormy winds there would have to be no heat transfer between the oceans and the atmosphere and no variation in atmospheric temperature or humidity across the entire earth. But if storms were not possible, then neither would it be possible to cool the human body through perspiration. Entirely different and unknown laws of thermodynamics would have to be in effect for their to be no possibility of storms. (p.103)

Likewise volcanoes and earthquakes are a natural part of a living planet. The ferocity of nature is a part of God’s good creation. This means the possibility for pain and suffering and death.

Gravity is likewise a part of God’s creation. Thus animals and people can fall and be injured.

Certainly there is no biblical basis for assuming that Adam could not trip and fall, bump his head on a tree limb, scratch himself, or burn his hand in a fire. Neither Satan nor Adam had to ask what a “bruised heel” was. Physical pain was not a foreign concept invented after the fall. (p. 107-108)

Hunger, accidents, and pain were all part of the original creation. There is absolutely no reason to assume anything else from any reasonable reading of Scripture. The text assumes that these concepts were known to the characters in the story.

A Day in the Life. Whorton argues that one must make incredible leaps to hold together a young earth perfect paradise view. The complications arise from both the bible itself and our scientific understanding.

The fall of Adam and Eve is important – but it is not the origin of all pain and suffering and nothing in the Bible supports the suggestion that it is.