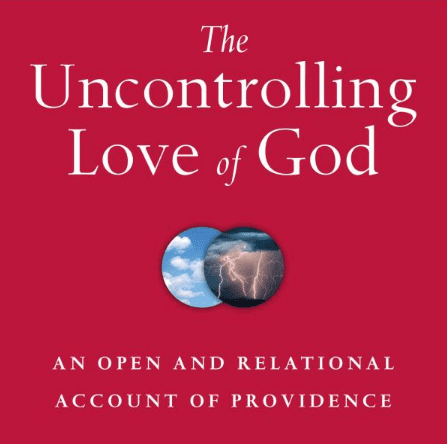 There are a number of realities that bump into God’s providence, or God’s superintending guidance of the world. What does it mean for God to love us? Is this a one-way gushing flow of God’s love to us without impact on God? Is one-way love genuine love (as we know it)? Or does love — for it to be love — require interactive responsiveness to be love?

Why pray? Is prayer interactive with God or is prayer simply the conforming of our will to what God will do anyway? If so, does God “answer” prayers or is that only our way of speaking?

Thomas Jay Oord, in his new book The Uncontrolling Love of God: An Open and Relational Account of Providence, sketches six, yea seven, models of providence and I want to sketch them today and in our next post on Tom’s book we will look at his “open and relational” view of providence. (From pp. 83-105.)

The basic idea of this model is that God causes all things. What appear to be random events or the activities of free will are m accordance with God’s will, such that God ultimately makes them happen, as they happen. God is in complete control.

B. B. Warfield, puts it succinctly, “There is nothing that is, and nothing that comes to pass, that [God] has not first decreed and then brought to pass by His creation or providence.”

Advocates of the omnicause model have a particular view of divine power in mind. They often use the word sovereignty when describing it, and they typically mean that God exerts control. Advocates find comfort in this model because it reassures them that whatever occurs—no matter how bad—is part of God s meticulous plan.

To critics, this model appears to imply that God promotes sin and evil.

Although I have no survey data to support this claim, I would guess this providence model is most common among “average” believers. It says God creates and sustains all creation. God empowers humans by giving them free will, at least sometimes. But God also sometimes overpowers human free will or interrupts the causal regularities of existence. Gods will is sometimes permissive and sometimes controlling.

This model starts with the premise that God essentially has the kind of power to create something from nothing (creatio ex nihilo) and control others entirely. Despite having the capacity to be all-controlling, however, God made a voluntary decision to give at least some creatures freedom. When doing so, God voluntarily gave up total control. God made this decision when initially creating, and God (usually) stands by it. Most advocates of this model say love is God’s motive for not creating humans as robots, allowing randomness and not controlling the created order entirely.

Philip Clayton’s version of this model is especially noteworthy because he rejects any divine control in the ongoing history of the universe. Clayton’s proposal might be named the not-even-once version of voluntary self-limitation. After God created the universe from nothing, Clayton says, God voluntarily decided not to control creatures or situations—ever!

My main problem derives from the voluntary aspect of God’s self-limitation. This model naintains a view of God’s power that says God could withdraw, override or fail to offer freedom/agency to creatures. God could momentarily violate the regularities/natural laws of the universe. God could intervene in these ways if God chose to do so because God can control others.

ifGodhasthe ability not to give freedom/agency or not to uphold the regularities/ laws of the universe, God should sometimes use those abilities, in the name of love, to prevent genuine evil. A loving God would become un-self-limited, if God were able, in order to stop evil. Claiming that a God capable of control nevertheless permits evil leaves crucial questions unanswered.

The model of God as essentially kenotic says God’s eternal nature is uncontrolling love. Because of love, God necessarily provides freedom/agency to creatures, and God works by empowering and inspiring creation toward well-being. God also necessarily upholds the regularities of the universe because those regularities derive from God’s eternal nature of love. Randomness in the world and creaturely free will are genuine, and God is not a dictator mysteriously pulling the strings. God never controls others. But God sometimes acts miraculously, in noncoercive ways. God providentially guides and calls all creation toward love and beauty.

The model of God as voluntarily self-limited thinks self-limitation is a free divine choice… The model of providence as essentially kenotic, by contrast, portrays God’s self-limitation as involuntary: God’s nature of love logically precedes God’s sovereign will. This means that God’s self-limiting Kenosis derives primarily from God’s eternal and unchanging nature of love and not from voluntary divine decisions. Because God’s nature is love, God always gives freedom, agency and self-organization to creatures, and God sustains the regularities of nature.

This model’s basic idea is that God exists as an impersonal force creating and sustaining all creation. Randomness, creaturely freedom and the regularities laws of the natural world are real. God’s steady-state influence never violates the integrity of the universe and its creatures that God now sustains. … God never engages in give-and-receive relationships.

Overall, this view helps in terms of what it says about God’s constancy. God sustains the natural laws, creates conditions for creaturely freedom and makes chance possible. But this model fails to support the idea that God is personal, interactive and involved in give-and-receive relations with creation.

After creating the universe, says this model, God did not stick around. God created all things, set natural laws in motion and has since withdrawn. God is now, to quote Bette Midler, “watching us from a distance.”

It typically goes under the name deism, although deism comes in many forms. Advocates share the view that God is not currently involved with the world.

By putting God’s action only at initial creation, however, this model has difficulty explaining how an omnipotent God would have created a world with so much evil. One wonders, is this the best an omnipotent God can create? To use Corev’s car illustration, couldn’t a really clever carmaker design self-building cars that function reliably?

Versions of this final model vary widely. Each shares the fundamental belief that while God acts providentially, we ultimately have no idea what God’s actions are finally like. No language, no analogy and no concepts can tell us the nature of divine providence. All is mystery.

I believe we cannot comprehend God fully. And mystery must play some role in discussions of how God acts in the world. But this model offers no constructive proposal. Although its advocates may sound humble when saying finite creatures only know in part, they end up implicitly or explicitly declaring we cannot understand divine providence. We may appreciate their humility, but we should not feel obliged to adopt their mystery model.

Instead, it subtly denies that theology can help us make progress in addressing the fundamental project of this book: making sense of life. I have included it in my discussion because many who affirm divine providence explicitly or implicitly appeal to it.

July 6, 2016 A Beautiful Crazy Mess
Recent Comments
4 Comments | Leave a Comment
"'This renewal began first with the renewal of the people of God (chapter 5 or ..."
Kostya2 Putting the Bible Together
"In Christ, there is no Jew or Greek, male or female."
Silverwolf13 Go Home or At Home?
"I just started to read about Scot Mcknight! His arguments are good.However, I recommend Scot ..."
Yechan Namgoong Tim Keller under the Eye
"" if it be Your will" 1 John 4:14,15 says, 14And this is the confidence ..."
disqus_5T2jXBEN10 JesusCreed.org Blog Prayer
Browse Our Archives
Related posts from Jesus Creed

Into Turkey-- Part Twenty-Three
Gaziantep is a city on the spice route, which has an incredible...