For many years a book, Grand Canyon a Different View was sold at the gift stores in the National Park. This book tells the story of the Grand Canyon from a Young Earth Creationist viewpoint of flood geology. I don’t know if it is still being sold at the National Park or not, but it is available on Amazon. According to the description on Amazon the book invites readers to “explore the majesty and beauty of one of God s greatest creations” and “see the canyon from a biblical perspective and understand how it fits into the flood of Noah” with essays from “Leading Grand Canyon Authorities: … Duane Gish, … Ken Ham, … Henry Morris, John Morris, … John Whitcomb, …”  Needless to say its presence in the National Park bookstore was controversial, especially if shelved under “science”. 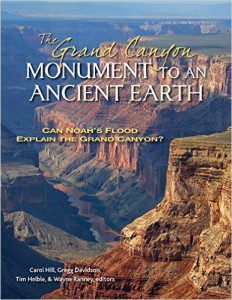 For most of us this may be an interesting bit of trivia, but nothing earthshaking. A group of Christian geologists found it somewhat more troubling. A distorted picture does nothing good. They have taken the opportunity to craft a book of their own with full color pictures and essays presenting their scientific and Christian view of the canyon, The Grand Canyon, Monument to an Ancient Earth: Can Noah’s Flood Explain the Grand Canyon?  This book is written with abundant pictures and diagrams to educate Christians about geology and the shortcomings of flood geology. Each of the chapters is written by experts in the area, many with years of experience in the classroom answering questions raised by students. Authors include Gregg Davidson, professor of geology at the University of Mississippi, Stephen Moshier from Wheaton College, Ralph Stearley from Calvin College, all of whom I’ve had a chance to meet and talk with at BioLogos meetings. Many, but not all, of their coauthors are Christians – but all have expertise in some aspect of the geology of the Grand Canyon.  Joel Duff, who blogs at Naturalis Historia (a blog well worth reading), contributed two chapters on the fossil record.

This is an important topic. Young earth creationism (YEC) is a powerful force in significant swaths of American Christianity. The Ark Encounter opened its doors earlier this month expecting to attract more than a million visitors a year. We’ve just finished a series on Mark Whorton’s book Peril in Paradise where he tells his story of coming to grips with the evidence for the age of the earth – and to the realization that the theological and biblical underpinnings of YEC are fragile. It is a shame when artificial and unnecessary barriers are erected, causing some Christians to struggle and preventing many non-Christians from even considering the gospel.  Like Whorton’s book, this book on the Grand Canyon focuses on the age of the earth. This isn’t a book about evolution as the mechanism producing the diversity of life. It is a book about layers of rocks, some with fossils others without, and the processes that could produce these layers and canyons and the fossil record. A young earth followed by a catastrophic global flood simply couldn’t do it.  Whether evolution is true or not, it is clear that the Earth is ancient.

The book is divided into five parts. Part 1: Two Views outlines the basics of the Flood Geology view of the earth and the canyon and contrasts it with the modern geological view. Part 2: How Geology Works provides a primer on the basic science of geology applied to the canyon. Part 3: Fossils: What Story Do They Tell investigates the layering and location of fossils and the insight they add to the picture developed from the rock layers. Part 4: Carving of the Canyon looks specifically at the processes that carved the canyon out of the sedimentary layers. Fossils provide information on this as well. The book concludes in Part 5 with A Verdict on Flood Geology. If you are at all interested in these questions, either personally or as a Christian leader and teacher who has to deal with the very real questions raised by people – both Christians and non-Christians – I recommend this book highly. It is an excellent resource.

I’ll conclude this post with a few points from the introductory section on two views along with some of my own observations. In later posts we will look at some of the science in more detail. 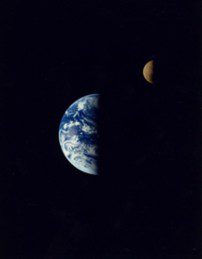 Flood geology is an approach to science that assumes a timeline believed by its supporters to be the clear teaching of the Bible. This is foundational. As Ken Ham repeated often in his debate with Bill Nye – it all comes down to “I have a book.” In reality it is based on a selective literal reading that ignores many of the features of ancient cosmology in the text. Vaults and pillars and waters and storehouses for rain and hail and snow for example. The idea of the earth as a spheroid in space orbiting the sun is completely absent from the Old Testament including Genesis. But few proponents of YEC will argue that this is not true. Other ideas, however, are taken as absolute truth. As a result, both passages of Scripture and scientific observations are twisted to fit into a largely predetermined scenario. Only details can be modified by observation. This provides a key distinction between flood geology and modern geology. (Image from NASA)

The conventional scientific approach puts all ideas and theories about the workings of nature to the test (not tests of whether nature is superintended by a divine creator, but tests of whether nature has behaved in one particular way or another).  This approach starts with questions and works forward to find answers. All the conclusions on the right side of the table [see book for table] grew out of observations and testable hypotheses derived from studying the Earth and its surrounding solar system, with questions unfettered by preconceived notions of what the answers should be.

In contrast, flood geology starts with the answers and works backward to what questions should be asked. (p. 29)

It is important to realize that “nature” is not separate from the providential action of God. Also, despite the belief of many Christians, scientists do continually refine and modify conclusions in the light of data. This is a communal effort and every idea is tried and tested. Some conclusions are so well supported that none of us think they will be overturned, but evidence advanced to the contrary is still evaluated carefully (the supposed observation of a faster than light neutrino of a few years ago is a case in point, see here). 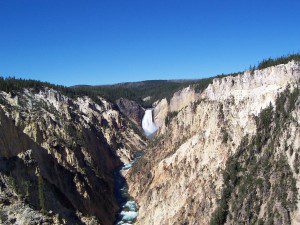 Contrasting Flood and Modern Geology. The conclusions in the table on p. 29 (referred to in the quote above) include the age of the earth and the occurrence of a global flood. Specific to the Grand Canyon: “Most fossil-bearing sedimentary rock on Earth, including most Grand Canyon strata, formed during Noah’s flood in only one year’s time.” vs “Sedimentary rocks have formed over hundreds of millions of years through processes of sedimentation, compaction, and cementation.” and “The Grand Canyon and Colorado River were formed when large post-flood lakes emptied catastrophically.” vs “The complex history of the Colorado River and the Grand Canyon is still being investigated, but the canyon’s erosion involved millions of years.”  It is possible for a canyon to form in a catastrophic flood. According to modern geology such a process is behind the formation of the Grand Canyon of the Yellowstone some 14000 to 18000 years ago at the end of the ice age (see here). But the canyons in Arizona and Wyoming are very different. (Image of my own.) 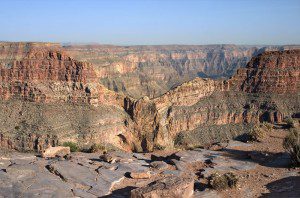 Flood geology can and should be evaluated scientifically because as Moshier and Hill note in Chapter 2 “flood geologists argue that their geologic interpretations are in fact testable by scientific investigation, so throughout this book we will evaluate the claims of flood geology on their scientific merit.” (p. 29)  (Image source)

The next two chapters run through the differences between the flood geology scenario and the scenario developed through scientific investigation. Each point is carefully illustrated with diagrams and pictures. The science itself is discussed in Part 2. In future posts on the book we will look at the science and the short-comings of the explanations of flood geology.

What evidence for the age of the earth is most convincing?

Is the question of age a problem in your church or among the people you know?

July 21, 2016 Barrage of News about Violence on TV
Recent Comments
10 Comments | Leave a Comment
"This article starts a series on what A Course in Miracles (ACIM) implies when acim ..."
burakdeniz The Miracles of Creation? (RJS)
"It is your confidence in these thoughts that needs pardoning and what causes absolution a ..."
burakdeniz The Miracles of Creation? (RJS)
"Scot, 1 Cor 16:15-18 asks the Corinthians to submit to the leadership of Stephanas and ..."
Richard Fellows Finishing Well With Clement
"I can only guess that they look at Trump as a kind of god like ..."
D.M.S. The Gospel of With Us and ..."
Browse Our Archives
get the latest from
Evangelical
Sign up for our newsletter
POPULAR AT PATHEOS Evangelical
1