I didn’t know the Sea of Galilee was polluted. I sit in the tiny skiff with Micah and his crewman, trying not to gape. It’s early morning, just sunrise. An egret lands two feet from me in the bow and stays with us. We pass a row of fancy hotels just as the smell of sewage hit my nose. I glance at Micah, a lifelong Galilee fisherman, to see if he registers the foul smell at all. He does not. But I can see its source: resort hotels line this section of the lake, just where the stench begins. It appears they are dumping their raw waste into the waters. Later, I would confirm this. To my surprise, Micah chooses this very area to set his net this morning. Later that day, I watch him drink a plastic cup of water, then throw it overboard along with the cellophane wrapper from the box of cookies they ate for lunch. I saw the garbage that came in with each pull of the net. 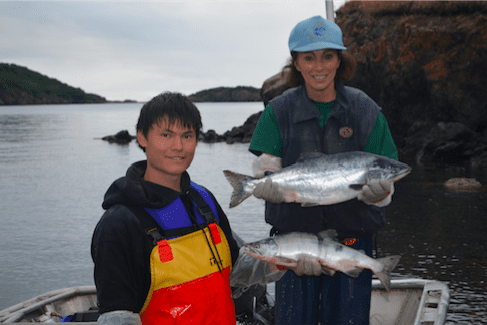 I live on a huge sea in Alaska. I understand why people mistake the ocean as a limitless resource that can absorb every offense in its incalculable vastness. But this lake, this “sea” I can encompass in a single glance? Who could miss its fragility, its limits? And this body of water is considered sacred, holy to many around the world. Nearly three million people will visit its shores each year, venerating the waters Jesus lived beside, that he walked upon, that he calmed with a command, “Peace! Be still!” These holy waters also collect the agricultural runoff from the hillsides around its shores, runoff that has turned the Jordan River into a thickened greenish soup, barely moving.

Micah didn’t catch much that day. In fact, fisherman rarely catch many fish anymore. Before 2005, 295 tons of St Peter’s Fish were caught annually. In 2009, the total was only eight tons. In 2010, stocks had fallen so low fishing was banned entirely for two years. 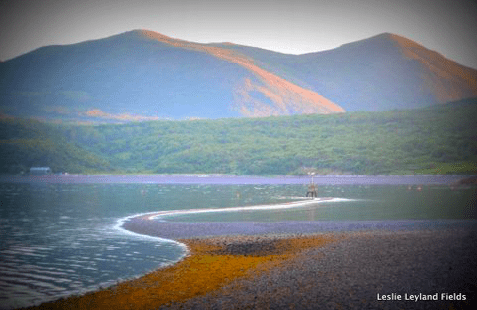 It is hard for me to make sense of this blindness and abuse here on the very lake Jesus chose to live and to heal and spread the good news of the coming of the Lord, where fish were multiplied and miraculous catches broke fishing nets. Abundance has been the rule of the day for centuries in this lake. The 19th century English clergyman, Henry Baker Tristram, recorded that “the density of the shoals of fish in the Sea of Galilee can scarcely be conceived by those who have not witnessed them”. And now—-the fish are few. Holy waters will not absorb and absolve our sin and our guilt. The plastic will not degrade. The fish will not multiply. The water will only dirty us, it will not cleanse. Why do we close our eyes and kill what we need, what we love?

This happens so often. When anything we love and need is plentiful, when the fish are thick, something dies. It’s happened to us in our good years, when the salmon throng our nets. We forget to look. We do not see their beauty, their scales like armor, fit each to each, their silver-stippled sides, their shimmering backs, their blue eyes, their rainbow tails. Even as we hold them in our cramping hands, then toss them into totes of ice, they are lost to us. We waste them.

We cannot see beyond the moment, and imagine they are inexhaustible, these fish. These waters. We believe they are all here for us. We cannot imagine a river drying up, a drought of salmon, an emptied lake. We do not know we are that powerful, that wrong. We don’t know it starts with closing our eyes.

Isn’t this our human history? We are inclined to waste, all of us. 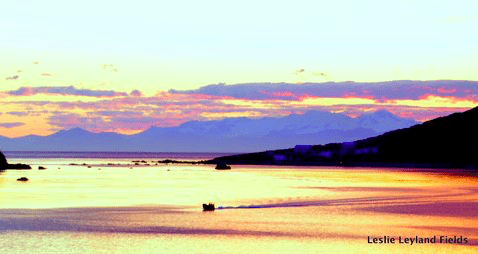 We cannot not create waste. Even the purest water will turn to waste in our bodies. There is always something left over. Only the dead produce nothing. But we’re wasteful in our waste. In America, we generate 250 million tons of waste annually. We bury more than 30 million tons of food in landfills every year. We throw too much away because we buy too much. And we buy too much because, in the land of plenty, we don’t know the difference between need and want. It is clear: in our all-too-human economy, the more we have, the more we squander.

While pulling those empty nets on the lake in Galilee, I knew I was just a few miles from the hillside where another economy was displayed. More than five thousand were there that day, gathered to hear the words of this strange rabbi. When he stopped teaching, when it was time to eat, there was no food but one boy’s sack lunch of five barley loaves and two small fish. How can so little feed this massive hungry throng? It was enough. Jesus broke the bread and the fish, thanked God, and passed them from hand to hand, somehow the fish and bread splitting, multiplying in their very hands to fill every mouth, every appetite. When all had eaten, astonished at the bounty, He was not done. Jesus rounded his disciples and instructed them, “Gather the pieces that are left over. Let nothing be lost. “

They must have protested. What was the sense of this? When food is sparse, when resources are thin, when a god is limited and his miracles cautious and rare, we expect frugality. Yes, save every crust! Who knows when more is coming! But when the God of all plenitude has just filled every appetite and need—and can do it again and again? Even then, Let nothing be lost? Yes, even then. Especially then. In times of bounty as well as in times of want, God’s resources never lose their value.

It has always been so, since the very beginning, since the first “Let there be” was spoken out of the mouth of the Creator God. Can we envision the flocks of birds, the hordes of animals, the masses of fish sent spinning and swimming in those new fresh seas? And then, into all this thriving busy world, came Adam, Adam, formed from the dirt, the Hebrew word Adamah, which tells us something crucial about man and his place in creation. Adamah is not simply ground or dirt, but specifically arable soil. The soil-man, who bears as well “the image of God,” is placed in a place that further locates and identifies him: “The Lord God took the man and put him in the Garden of Eden to cultivate it and watch it.” To cultivate and watch it, guard it. Man and woman, then, are given a specific task and position: to act as God’s representatives over all that was made, to bring it under God’s authority that it might multiply and flourish. Multiply and flourish.

It’s still not this simple. In the creation account, there’s a tension between the essential humility of humans, made from “humus,” the earth, but who are then given the authority to “rule and subdue” all the other creatures, also made of humus. When we focus more on our authority rather than our responsibilities in creation, nature may be seen as existing solely for our own purposes and pleasures, setting the stage for environmental exploitation. Lynn White made just such a charge in his watershed essay, “The Historical Roots of Our Ecological Crisis” that appeared in Science magazine, in 1967. White attacked Christianity as “the most anthropocentric religion the world has seen.” He characterized the Christian perspective as the belief that “nature has no reason for existence save to serve [humans]” Thus, for White, Christian arrogance towards nature “bears a huge burden of guilt” for the contemporary environmental crisis.

I can’t deny some truth in these charges. But a growing number of eco-theologians, including Norman Wirzba, Wendell Berry and Ellen C. Davis, are righting the balance, offering biblical support for a humbler view of humankind as a member in a “community of creation” rather than a lord over it. Adam and Eve are set in a world already buzzing and humming and teeming with creatures who are blessed before we even show up. Yes, man and woman are uniquely made in the image of God, the Imago Dei, and are given rule over creation, but they are to use and cultivate the earth in such a way that the birds of the air, the fish and all creeping things, whom God delights in and pronounces “very good”—the same words used for humans—can likewise feed, multiply and flourish. That all creatures may feed, multiply and flourish. This is how our own presence blesses all of creation. We are here for this: to bless. How do I say this any of this to Micah? I did not.

On the shores of the island I live and fish on in Alaska, the charge over our waters and land feels personal and intimate. How shall we respond? We’ll guard the purity of our waters. We’ll pull plastic from the waters and tidelines. When I go out to the nets to pull salmon from the ocean, I’ll try to remember to see them again. I’ll hold a red salmon in my hands and feel its weight, admire its fit of scale on scale. I’ll place my hand on the rainbow fan of a king salmon tail, marveling. When I walk a salmon in each hand up to my house, to the kitchen, I will carve every bit of flesh from its bones. From our salmon dinners, I will toss what’s left into chowder. I will fillet the silvers carefully, packing them neatly into the freezer for the winter ahead. Every bite will taste of ocean and care. Every bite will feed and nourish my family and friends and all who gather for potlucks at our church and our house. Let nothing be wasted. Not this ocean, not any lake or sea, not a single fish. Let the hungry gather. Let us offer what we have—-two small fish that we raise our heads and thank God for, then break and pass from hand to hand to hungry mouth until all are filled, and still we pass the basket, collecting now what’s left for any more who hunger and need.

September 12, 2016 Wesley Hill and the Acts 15 Argument
Recent Comments
0 | Leave a Comment
Browse Our Archives
get the latest from
Evangelical
Sign up for our newsletter
POPULAR AT PATHEOS Evangelical
1