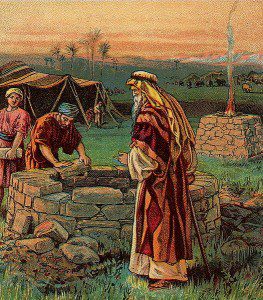 Despite his position as a patriarch (Then he said, “I am the God of your father, the God of Abraham, the God of Isaac, and the God of Jacob”), Isaac doesn’t play much of a role in Genesis. In broad terms he serves as the son of Abraham and the father of Jacob. There is only one rather short segment where Isaac is the primary actor.

In Genesis 24 Abraham sends his trusted servant to get a wife for Isaac from their own people. Isaac receives his wife – but that is his only action.  In 25:9 Isaac and Ishmael bury their father Abraham. In 25:21 Isaac prays to God for a child as Rebekah is barren. (For those keeping track, chronologically earlier as Isaac is said to be 60, while he was apparently 75 when Abraham died (given Abraham’s recorded age at Isaac’s birth (100) and at his death (175)). Then there is the story of Isaac and Abimelech (26:1-33) where Isaac flees in time of famine, passes off Rebekah as his sister, and digs a number of wells in pursuit of peace. He is fooled into blessing Jacob in Esau’s place (ch. 27), sends Jacob away (28:1-5), and finally dies at the reported age of 180 after Jacob returns with his family from his uncle Laban (34:27-29).

The story of Isaac and Abimelech is quite similar (but not identical) to an earlier encounter between Abraham and Abimelech (20:1-18, 21:22-34). The similarities have led some to propose that there was one original story, sometimes told in the name of Abraham, at other times in the name of Isaac. This, however, is a flat reading of the text. However the stories originated in the oral history of the Israelites they are combined here with a definite theological message. Bill Arnold (Genesis) writes:

In fact, this text is devoted to making Isaac look as much like Abraham as possible. Echoes and direct allusions to the Abraham narrative permeate the whole, inviting the reader to relive many of those episodes through Abraham’s son. The effect is to confirm Isaac as the true heir of Abraham’s covenant blessing, the legitimate successor in the ancestral line and therefore the true patriarch of Israel. (p. 235)

John Walton makes a similar point. “Isaac is portrayed as following in the footsteps of his father Abraham. … chapter 26 functions appropriately in the story  of the development of the covenant.” (NIVAC Genesis p. 558-559)

The similarities between the stories of Abraham and Isaac begin earlier. After 20 years of marriage the wife, confirmed through the earlier narrative as a wife suitable for Isaac by divine sign, was barren. Without a son the covenant promises to Abraham come to an end. We read: Isaac prayed to the Lord for his wife, because she was barren; and the Lord granted his prayer, and his wife Rebekah conceived. (25:21)  Isaac’s faith and entreaty is important. Bill Arnold notes

The expression “Isaac prayed to the Lord … and the Lord granted his prayer” (v. 21) is the only place in the Bible where the verbal root ‘tr, “pray, plead, entreat,” is used in both active and passive voices in such a deliberate word play: Isaac entreated … and Yahweh was entreated. I propose this turn-of-phrase denotes that Yahweh was emotively stirred into action, not against his will, but precisely to accomplish his will through the urging of his servant. (p. 231)

Isaac has faith in the Lord’s promise and prays for a son. Isaac’s two sons are the result of God’s promise and God’s action. The younger is the son of the promise, but the older will also become a great nation. Same mother, but still an echo of Ishmael and Isaac.

Back to chapter 26 and Abimelech. It is not clear that Abimelech is the same person who dealt with Abraham in ch. 20. Tremper Longman (Genesis) notes “Abimelek, “my father is king,” may be, and indeed sounds like, a throne name.” (p. 341)  Bill Arnold tabulates the echoes of Abraham in this passage. Some of the similarities:

I will make your offspring as numerous as the stars of heaven, and will give to your offspring all these lands; and all the nations of the earth shall gain blessing for themselves through your offspring (v4) [Abraham: e.g. 12:1-3, 22:16-18 as well as other passages]

Unlike the story of Abraham, where God revealed Abraham’s deception in a dream, here Abimelech observes Isaac fondling his wife. Both John Walton and Bill Arnold point out that “the text uses a word play on Isaac’s name to denote sexual play.“(Arnold p. 238)  Walton “Isaac is seen “Isaac-ing” with his wife.” (p. 559)

Isaac sowed seed in that land, and in the same year reaped a hundredfold. The Lord blessed him, and the man became rich; he prospered more and more until he became very wealthy. He had possessions of flocks and herds, and a great household, so that the Philistines envied him. (v12-14) [Abraham: 13:2, 24:35]

That same day Isaac’s servants came and told him about the well that they had dug, and said to him, “We have found water!” He called it Shibah; therefore the name of the city is Beer-sheba to this day. (v32-33) [Abraham: 21:30-31] 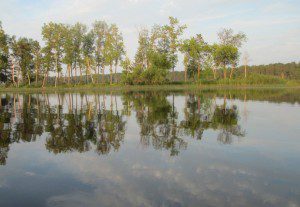 Some have claimed that the similarity in the two passages – Abraham and Isaac with Abimelech – demonstrate the assembly of the text from sources, and claim that this then undermines the authority and inspiration of Scripture. Others point to anachronisms such as Philistines and domesticated camels at the time of the Patriarchs as evidence of the cobbled together and human nature of the text (although Arnold suggests that “the lack of evidence for their [camel’s] domestication has been over-interpreted” p. 221).  But this is focusing on the bark of the trees rather than taking in the majesty of the forest.

Genesis is a tightly constructed text – with frequent word plays and with purpose. The primary purpose of these passages is to show that Isaac is the covenant son and a patriarch in his own right chosen and blessed by God. God has brought forth the people of Israel. Whether incidents from the life of Isaac (representing a small portion of a long life) selected and organized for this purpose or a literary construct digging up a distant past, the intended message is unchanged.  This is what carries authority as the inspired word of God. I am not arguing for a modern, critical interpretation over a traditional one – just noting that, when push comes to shove, I don’t think it matters much at all. We need to be focused on the message rather than the details.

I don’t think I have ever heard a preacher or teacher emphasize the parallels between Isaac and Abraham and their importance in the establishment of Isaac as the rightful heir and patriarch in his own right.

What is Isaac’s role in the narrative of Genesis?

What message should we take form the text?

September 13, 2016 Loving to Know
Recent Comments
7 Comments | Leave a Comment
"This article starts a series on what A Course in Miracles (ACIM) implies when acim ..."
burakdeniz The Miracles of Creation? (RJS)
"It is your confidence in these thoughts that needs pardoning and what causes absolution a ..."
burakdeniz The Miracles of Creation? (RJS)
"Scot, 1 Cor 16:15-18 asks the Corinthians to submit to the leadership of Stephanas and ..."
Richard Fellows Finishing Well With Clement
"I can only guess that they look at Trump as a kind of god like ..."
D.M.S. The Gospel of With Us and ..."
Browse Our Archives
get the latest from
Evangelical
Sign up for our newsletter
POPULAR AT PATHEOS Evangelical
1