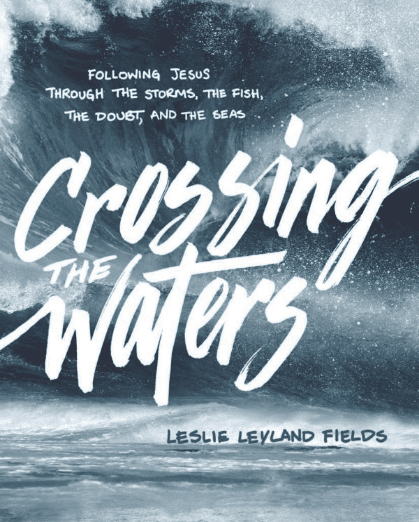 It’s campaign and election season for all of us, but I’m even deeper in campaign mode than usual. I’m in the throes of my husband’s run for the state house while also in my own “campaign”—publisher’s terminology—as my tenth book releases this week. And that book (Crossing the Waters: Following Jesus through the Storms, the Fish, the Doubt and the Seas) is itself the fruit of following Jesus’ three-year campaign in Galilee. To better understand those events, I hiked the Gospel Trail solo around the Sea of Galilee, to the village sites where he spent most of his public ministry.

What do people do in a campaign? The first meaning of the word is defined in a military sense, as “a series of military operations intended to achieve a particular objective.” Its second use is more general: “to work in an organized and active way toward a particular goal, typically a political or social one.”

What must campaigners do to achieve their objective? They go door-to-door, from village to city reaching out to all who will listen to their good-news message. To succeed, they must attract an audience then a following. Their goal—to sway minds and win votes. Every vote counts! (How well I know!)

But Jesus was a lousy campaigner. Even when we grant that Jesus was not a political figure but a religious figure, I am still astounded at how Jesus did everything straight-out wrong. For someone claiming to be a king, he was incredibly irreligious and impolitic. Consider with me the Ten Ways Jesus Ruined His Campaign:

Every king and political leader in history had advisors. Now, even in small regional campaigns, candidates are guided and even “handled” by political action committees and media experts. Everyone knows it takes expertise to gain power and position.

Jesus chose men who were political outcasts—a revolutionary, a tax collector colluding with the enemy—or who were politically and religiously invisible—fishermen. None of them were religiously or politically wise or connected. Collectively these “unschooled’ men lowered Jesus’ credibility. Nor did they understand much about who Jesus was and what he had come to do.

No one does this, not even the “outsiders” making much of their roots as good country folk. Mr. Smith must go to Washington. Jesus did go to Jerusalem but most of his ministry teachings and healings took place in the boonies.

Jesus spoke clearly at times—the Sermon the Mount, the seven “Woes”—but at some point in his campaign, he spoke only in parables. Which no one understood without Jesus’ further (and often impatient) explication to the few who asked. When not speaking in parables, he spoke in metaphors that confused and sometimes repulsed his followers: “Unless you eat this body and drink this blood . . .” Many left after this particularly colorful speech.

The first parable Jesus taught was the Sower and the Seed. Just as the campaign gets started and crowds are amassing, as the disciples surely expected, Jesus’ rallying cry is that the majority will reject his message. The gate is narrow and few will find it. After those messages, Jesus began telling his associates of his impending execution. Not very inspiring.

He asked people to leave their jobs and their families for him. He asked the rich to give up their wealth. He asked everyone to turn over their entire lives to his cause. Most would not.

Jesus spent too much time with the wrong people and not enough time with the powerful and influential. But when he did, he repeatedly and deliberately alienated and threatened the entire political and religious systems.

8. He ignored his people’s most pressing issue: Roman occupation.

Jesus said little to nothing about the one issue the Jewish people cared about most: rising up as a strong, independent nation again.

After one of the miraculous feedings of the thousands, some on that hillside, fed and impressed, wanted to crown him their king immediately. But Jesus fled from that office of power.

Unlike any other candidate in history, Jesus had the capability to prevent his own death. But he chose to submit to the unjust authorities, ending his “race” on a crucifixion hill.

The outcome of Jesus’ “run” confused and disappointed everyone, and devastated his inner circle of friends and followers. He didn’t win the popular vote then, nor would he now. We know why: Jesus wasn’t running for political office. He was a king, though, and he did come to “campaign” for the kingdom of God. Jesus was not after votes, but hearts, and they would not be won in the usual ways.

In the end, everything his disciples hoped for did come true, just not in the way they expected. Jesus was crowned king—on a cross. He did defeat Rome’s power—by freeing them from sin. He did restore the Temple—by rising from the dead. Jesus won by dying.

Which leads us to the present. We’re all involved in one more campaign we often forget about. And it’s much bigger than the presidential election most of us are consumed by: “Go into all the world and preach the gospel,” Jesus said after his resurrection, deputizing and commissioning us all. This campaign supersedes all others, even and especially the presidential race. One thing is sure: if we’re operating by Jesus’ playbook, “success” will look entirely different than we expect.

October 3, 2016
Time to be an Anabaptist (David Swartz)
Next Post

October 4, 2016 Not Just Better; It Works (RJS)
Recent Comments
8 Comments | Leave a Comment
""
Queenofthefuzzybugs The (Non)Wesleyan (Non)Quadrilateral
""
Xanthrince JesusCreed.org Blog Prayer
""
William Ristau Writing In Your Life
"'This renewal began first with the renewal of the people of God (chapter 5 or ..."
Kostya2 Putting the Bible Together
Browse Our Archives
Related posts from Jesus Creed