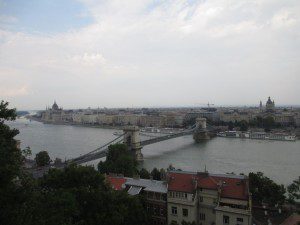 There is a well known image often used in evangelism – the bridge diagram. The cross is a bridge spanning the chasm between God and humans. A google search on “bridge diagram” will turn up many examples.  The bridge to the right is a very different kind – connecting Buda and Pest.

We, too, are called to build or be bridges. Now, clearly we don’t replace the cross or the one-off work of God through Christ in any way, shape or form … but that doesn’t change the point. Bridges bring connection, walls divide (purportedly to protect). A few I’ve seen include Hadrian’s wall, the Great Wall of China, modern examples include the fences and walls in Israel/Palestine. 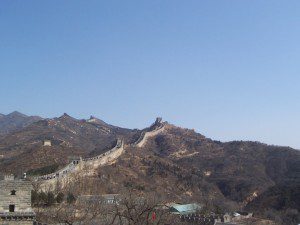 Bridge or wall? I have been posting on science, Christian faith, and related topics for more than eight years now, 850+ posts! This, and the conversation with many commenters and many perspectives, has dramatically changed the way I think about and approach controversial issues. The lead question to myself in any post, comment, or conversation is: bridge or wall? Am I building a bridge that brings us to understanding, increased faith, and hopefully some people to faith? or, alternatively: Am I building a wall that identifies and protects us while keeping them out?  The building blocks for the wall can be subtle, a turn of phrase, a name, an inside joke that identifies. A bridge takes work, conscious thought, and care. Walls are relatively easy. Walls lead to high-fives and affirmation. (And attacks as well, but who cares what “those people” think.) Bridges tend to be blasé by comparison. An occasional thank you (I appreciate those), but no adrenaline rush.  Walls keep us talking only to ourselves and others who think or live the same way. Bridges require effort, patience, and facing challenges head on.

We just came off an election in the US, an election that followed years (decades?) of wall-building on both sides. The rhetoric of the right emerged victorious over the rhetoric of the left. I avoid politics in public forums – in large part because the walls are thick – both the explicit and the implicit walls. This will not be a political post (i.e. not taking sides) – but it is triggered in part by current affairs. Because I am in the middle, with many friends and relatives who are quite conservative as well as friends, a few relatives, and many colleagues who are quite liberal, I have become hypersensitive to the language that divides. This can range from explicit put-downs to subconscious choice of words; the side we favor is described using words with a positive connotation, while the other view is described using words with a negative connotation (not the words with which they describe themselves.)  Word choice, while conveying exactly the same point, can build bridges or walls. Neither the left nor the right is blameless.

Bridges not walls. I am convinced that, as Christians, we are called to build bridges not walls. This doesn’t mean a wishy-washy lack of conviction, but an approach that sees the others as human beings created in the image of God – often as brothers and sisters. I fail in my calling as a Christian and a scientist if I fan the flames of conflict rather than seek to lead people into understanding.  I also fail if I allow wall-building to pass unchallenged.

Last Thursday I listened to Galatians on my morning commute. In the aftermath of the election it struck differently than it had in the past, and worth looking at and discussing more carefully. This book (along with Phil. 3:2 “Watch out for those dogs”) is often cited as an example of the importance of harsh rhetoric in defense of truth. However, if one digs down it seems that Paul’s anger was directed towards those who were building walls rather than bridges. In his world, some were claiming that to be a follower of Christ one needed to become a Jew.  In the processes people were being hurt. Other identifiers are at work today – but walls are still troubling. Paul’s instructions are ones that Christians should take to heart.

You, my brothers and sisters, were called to be free. But do not use your freedom to indulge the flesh; rather, serve one another humbly in love. For the entire law is fulfilled in keeping this one command: “Love your neighbor as yourself.” If you bite and devour each other, watch out or you will be destroyed by each other.

But the fruit of the Spirit is love, joy, peace, forbearance, kindness, goodness, faithfulness, gentleness and self-control. Against such things there is no law. Those who belong to Christ Jesus have crucified the flesh with its passions and desires. Since we live by the Spirit, let us keep in step with the Spirit. Let us not become conceited, provoking and envying each other.

Do not be deceived: God cannot be mocked. A man reaps what he sows. Whoever sows to please their flesh, from the flesh will reap destruction; whoever sows to please the Spirit, from the Spirit will reap eternal life. Let us not become weary in doing good, for at the proper time we will reap a harvest if we do not give up. Therefore, as we have opportunity, let us do good to all people, especially to those who belong to the family of believers. (Gal. 5:13-26, 6:7-10)

We tend to put a lot of emphasis on acts of the flesh such as sexual immorality, impurity and debauchery; idolatry and witchcraft … drunkenness, orgies, and the like, often skipping over the central part of the list. But this is the part that is hindering our witness today … hatred, discord, jealousy, fits of rage, selfish ambition, dissensions, factions and envy. I have not heard anyone among my non-Christian colleagues accuse Christians of debauchery and drunkenness; the most common complaints come from the middle group: hatred, discord, selfish ambition and the like. The impression is not of a people shaped by love, joy, peace, forbearance, kindness, goodness, faithfulness, gentleness and self-control or of a people who are marked as those who do good to all people.

Far too often we invite people to come behind our wall rather than building bridges that heal.

Elsewhere Paul writes “Do not repay anyone evil for evil. Be careful to do what is right in the eyes of everyone. If it is possible, as far as it depends on you, live at peace with everyone.” (Romans 12:17-18)

What can we do to build bridges?

What do we do (or say) that constructs walls?

November 15, 2016
What Every Church Needs to Hear
Next Post