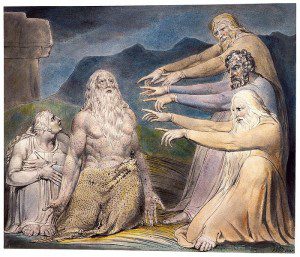 The retribution principle is simple: the righteous will prosper and the wicked will suffer. The corollary is that prosperity and suffering are always deserved. If someone suffers, it is because they are wicked, while prosperity is evidence of righteousness. Christianity puts another twist on this. Ultimate justice comes, not in this life, but in the age to come.

The book of Job puts the retribution principle on trial. There are three aspects to the trial. (1) The challenger suggests that people are righteous only for the reward, without the reward righteousness (i.e. behavior pleasing to God) would vanish. (2) Job’s friends are convinced that he must have done something to deserve his suffering. (3) Job, on the other hand, knows this isn’t true and challenges God’s justice. Where can this go? And a related question: are Christians righteous only for the reward (heaven)?

In part three of How to Read Job, John Walton and Tremper Longman III dig into the retribution principle. The idea that the world runs on a principle of justice was common in the ancient Near East, and remains common today.

Even among Christians today it is common to encounter the belief that if someone is doing well in life, he or she must be doing something right – pleasing God and gaining his favor. Inversely, people quickly jump to the conclusion that if life takes a bad turn, there must be a reason. (p. 90)

Some Christians will argue that all suffering is deserved because all sin, prosperity comes from undeserved grace (but, whispered, is probably a sign of God’s favor).  This isn’t on the table in the book of Job. We know from the get-go that Job is righteous in the eyes of God. Righteousness doesn’t mean sinless perfection, but a life lived to please God.

Also not on the table is a hope for justice in the age to come. The Israelites did not have an expectation of an afterlife in communion with God. Justice, including reward and punishment, was a this-worldly affair. Because this comes as a surprise to many Christians, Walton and Longman devote a chapter to defending this idea. The resurrection is a later idea, still controversial in the New Testament, and, except for the book of Daniel (esp. 12:1-3), absent from the Old Testament.

In the rest of the ancient Near East, with a pantheon of gods, where “evil” was built into the cosmos, suffering and the retribution principle was explored – but the problem looms especially large in Israel (and subsequently in Christianity).

In Israel, the absence of any source of divine authority other than Yahweh limited the philosophical possibilities regarding the origin of evil and the source of suffering (1 Sam 2:6; Job 2:10; Eccl 7:14; Is 45:7). No supernatural power alongside Yahweh or outside of Yahweh’s sphere of power existed. At the same time, Yahweh was considered powerful, good and just.  Thus one might say that the theodicy question bloomed in Israel, and in this hothouse of theological tension, the retribution principle provided the traditional explanation, despite its obvious inconsistencies in accounting for human experience. (p. 94)

Theodicy is the vindication of divine justice and providence in a world where suffering and evil exist. According to Walton and Longman “The role of the book of Job is to perform the radical surgery that separates theology from theodicy. … [Yahweh] does not need to be defended; he wants to be trusted.” (p. 95) Justice is not the principle by which God governs his creation.

Wisdom Literature. The retribution principle forms a backdrop for much of the wisdom literature in the Old Testament – Psalms, Proverbs, Ecclesiastes, and Job. The retribution principle is affirmed in Psalms, Proverbs, and Ecclesiastes, although with some qualifications. First, the writers were clearly wrestling with the idea, because reality didn’t seem to match their expectation. Second, the affirmations are often proverbial generalizations rather than universals. The righteous will generally prosper and the wicked will generally suffer; not the righteous will always prosper and the wicked will invariably suffer.  Qohelet (the Teacher) wrestles with reality in Ecclesiastes. Life is unfair and all is meaningless. The book is framed by a second speaker, who changes the tone and delivers the message of the book:

Now all has been heard;
here is the conclusion of the matter:
Fear God and keep his commandments,
for this is the duty of all mankind.
For God will bring every deed into judgment,
including every hidden thing,
whether it is good or evil. (12:13-14)

Walton and Longman conclude that the retribution principle is a biblical teaching, however. … “We still must be careful to understand it as theology, not theodicy; as proverbial rather than propositional; as operating in the realm of God’s wisdom, not his justice; and as investigated in relation to purpose rather than to cause.” (p. 106) This is an important lesson. Prosperity is not a promise to be claimed. Instead we are to trust God’s wisdom.

Once we recognize that the Israelites had no hope of heaven and begin to read the contexts of the Old Testament in light of their limited understanding, we gain valuable insight into important theological issues. First, we learn that a relationship with God need not be constructed around a hope of heaven. This is important for Christians to understand because it is common for people to think that the work of Christ is primarily intended to offer us the benefits of going to heaven and living forever rather than going to hell. Such an understanding is a distortion. The work of Christ makes it possible for us to be in relationship with God now and forever. If we have “signed up” for the benefits, for what we stand to gain, then the question of the challenger can be seen as an indictment against us. … What if we had none of the benefits (heaven, eternity, etc.)? Would we serve God anyway? We can learn from the book of Job and from Israelite theology that we should focus more on our present relationship with God than on our future benefits. (p. 118)

We shouldn’t follow Christ for what we can get, but because he is Lord.

Asking the right questions. If you are interested, here is an excellent short talk by John Walton on Job. An entertaining and though-provoking way to spend half an hour. It is a good resource for small group discussion as well – I presented it recently in three segments (1. 0:00-9:15, setting up the triangle; 2. 9:15-18:04 The challenger, God’s policies and Job’s motives; 3. 18:04-26:46 the result of the trial) with time for discussion between segments.

November 17, 2016 Heterosexual Marriage, the Gospel, and Ray Ortlund
Recent Comments
5 Comments | Leave a Comment
""
Queenofthefuzzybugs The (Non)Wesleyan (Non)Quadrilateral
""
Xanthrince JesusCreed.org Blog Prayer
""
William Ristau Writing In Your Life
"'This renewal began first with the renewal of the people of God (chapter 5 or ..."
Kostya2 Putting the Bible Together
Browse Our Archives
Related posts from Jesus Creed