The War of Christmas: Do Not Be Afraid (Jonathan Storment)

The War of Christmas: Do Not Be Afraid (Jonathan Storment) December 14, 2016 Scot McKnight 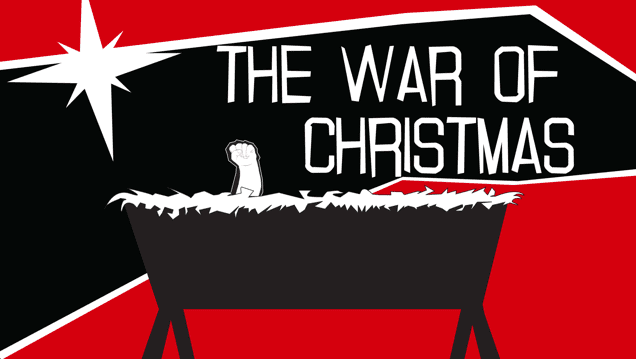 I think it is interesting that every year we talk about a war on Christmas. Every year, there is some story that makes the 24-hour news cycle, and we start hearing the pundits on television talking about the war on Christmas. It is normally about how some nativity scene in some city was forced to move away from a public park next door to some land owned by a church.

And we call that war.

If we think that moving our nativity scenes is the equivalent of war, then we should go back and read the Christmas story. Do you remember why Mary has the child in a cave? Remember why God has to send some coded message to some wise men with stars? Remember why Mary and Joseph went back to Bethlehem in the first place? Or why they had to flee as refugees to Egypt?

That is because the Christmas story starts off with a first century Hitler on the throne. Herod is so afraid of losing his power that he is willing to wipe out an entire generation of Jewish boys just to make sure he has killed one of them. Joseph and Mary have to leave their home and become refugees overnight. Herod commits infanticide on hundreds or thousands of baby boys.

Right now, all over the world, there are people who gather together in secret to celebrate the birth of Jesus. Just by gathering together they are breaking the law, and it is not because the national governments of the places where they live don’t understand Christmas, it is because they do! The truth is that there isn’t so much a war on Christmas as there is the War of Christmas.

Jesus didn’t come with the title of religious figurehead. He came with the title of King. In a day and culture where that meant something. He is the president, the Prime Minister, the Supreme Leader of the World. That is what Christmas means, and wherever a group of people gather together and celebrate that, expect for there to be people who are against it.

Christmas in the Margins

It is ironic to me that we fight about Starbucks or Wal-Mart not saying Merry Christmas, or we argue about nativity scenes getting pushed to the margins of society. It is ironic because that is exactly where the first nativity scene occurred.

If the Christmas story is true, then this is not an accident. Jesus being born in the margins of society was not a setback for God, it was the strategy of God.

God coming through the oppressed and poor is not just part of the story, in many ways, it is the point of the story.

Now I understand why Christians sometimes get upset up about this. Symbols matter, and when we see culture replacing language of Christmas with Happy Holidays it reminds us of the larger decline of Judeo-Christian values in society. I really do understand that, and I know that it matters. But a lot of the rhetoric I hear about this seems based in fear. And that is why it is important to actually remember what the real Christmas story is about.

If you think about it, that is really the dumbest thing they could say. “Don’t be afraid Mary?” Really?

She is about to go head to head with Rome, the largest political power the world had ever seen. From her Jewish peers, she is going to face gossip and shame. Her firstborn is going to be killed, and her family is going to be in danger every day from that moment forward. And the Angel has the moxie to tell her not to be afraid?

But, at least historically speaking, the Angel was right.

In the fourth century, there was a monk named Dionysus the Insignificant (who was a bit bummed about his last name) but this monk is the one who gave us the Calendar we still use today. And Dionysus didn’t put at the center of his calendar the story about the founding of Rome. Unlike every other calendar of his day, this monk divided up time Before Christ and After Christ. His calendar was centered around the Christmas story.

Jesus lived and died and Caesar never even knew about him. John Ortberg points out that one of the earliest titles of Jesus was the Lord of Lords and the King of Kings. They called him that in a time when Jesus had only a handful of followers. In the day the first Christians started calling him that, it

They are all dated by the King of Kings.

I love the way G.K. Chesterton says this:

Philosophy still sat in the high places and even on the thrones of the kings, when Christ was born in the cave and Christianity in the catacombs…The cave in one aspect is only a hole or corner into which the outcasts are swept like rubbish; yet in the other aspect it is a hiding-place of something valuable which the tyrants are seeking like treasure. In one sense they are there because the innkeeper would not even remember them, and in another because the king can never forget them… [Christmas] was resented, because, in its own still and almost secret way, it had declared war... Those who charged the Christians with burning down Rome with firebrands were slanderers; but they were at least far nearer to the nature of Christianity than those among the moderns who tell us that the Christians were a sort of ethical society, being martyred in a languid fashion for telling men they had a duty to their neighbors, and only mildly disliked because they were meek and mild.

Did you catch that? Those who charged the Christians with burning down Rome were lying, but at least they were closer to the true nature of Christianity than people today. Christianity is not just some domesticated religion for suburban people to feel better about themselves, and Christmas isn’t just lights and presents. In its own still and secret way, it is declaring war.

So maybe you don’t believe that Jesus was the Lord of lords and the King of kings – but no matter what you believe, or where that nativity scene winds up moving to this year, the undeniable fact is that every ruler who has ever reigned, every nation that will ever rise and fall, now must be dated in reference to the life of Jesus.

After all, today we name our daughters Mary, and our dogs Caesar.

That is what Christmas means. God is waging a war on all wars, and God wins.

Do not Be Afraid.

December 14, 2016
Can We Still Be Astonished? (Leslie Leyland Fields)
Next Post