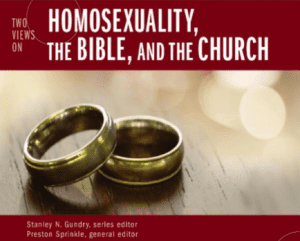 In addition to William Loader’s rigorous reading of texts about same-sex relations in the Bible in their Jewish context — and he does so in a strong, traditional manner (though he doesn’t think that teaching is normative) — and Megan DeFranza’s careful reading of the texts more in line with exploitative relations, while not discussing consensual, monogamous same-sex relations, Wesley Hill, a NT professor and fellow Anglican, proposes to read the texts in light of a biblical theology that he finds carefully expounded by St Augustine. All of this is in Preston Sprinkle, Homosexuality, the Bible, and the Church.

What is your response to Hill’s endorsement of Spiritual friendship as a third way?

Augustine’s view is that the Bible unfolds into a four-fold understanding of marriage: (1) it is a bond of male and female, (2) marriage is ordered toward procreation, (3) marriage requires fidelity, and (4) it is sacramental or signifies Christ’s love for the church. (This is mostly quoting from p. 131, after his summary discussion on pp. 127-131.)

SMcK: this is a classic presentation but one that like so many others I have read — from Piper to Keller — lacks at a profound level the Song of Solomon and sufficient emphasis of love in Jesus and the apostles. The sacramental love of God for us in Christ doesn’t cut it deep enough for me; the Song of Songs shows this love to be between a man and a woman, and the sacramental emphasis tends to turn relational love into something else — a sign — rather than the direct encounter (I-Thou) of a man and woman. We don’t love to signify; our love signifies. Wesley has plenty about love in his section on Spiritual Friendship (see below) but at this point in his discussion of biblical marriage in an Augustinian key there is not enough emphasis on love.

Hill’s christological centeredness in how to read the Bible then is used to comprehend the texts about homosexuality in the Old and New Testaments.

The text in Leviticus 18:22 is to be tied to Genesis in that the words for male and female connect both Genesis 1 and Genesis 2. Hence, it expresses the creation order and same-sex relations violate the “male and female” ordering of creation. It is against “all same-sex coupling” (133, his italics), and the inclusion of the resident alien in this requirement shows it is seen as universal.

Now to Romans 1. It’s about universal sinfulness, and the story at work here is the creation account of Genesis. This helps to define “nature” as “male and female.” Thus, same-sex couple is “unnatural” (that is, not according to creation order). Idolatry and wrath lead to humans being surrendered to their desires, which here is about same-sex relations. The exchange of men-to-men or women-to-women then abandons the interdependence of male and female in creation order. Wesley here anchors more in the fall than I would; I would anchor this more in the choice to abandon God.

He sketches 1 Cor 6:9-11, which I often describe as the notorious sins of notorious sinners, uses terms that refer to the effeminate, penetrated male, as well as to those who go to bed with other males. He doesn’t think this is just exploitative relations but to any and all forms of same-sex relations.

In his discussion of a Christian theology of homosexuality, Wesley discusses Robert Song’s theory, namely, that procreation in the age of resurrection is not needed. But Song affixes the other traditional view to that: that marriage will not exist in heaven. I am a minority view on this one but I don’t believe the NT texts actually say that: they say there will be no new marriages; not that there won’t be any marriage (see my The Heaven Promise). Song takes this to this: since procreation is not needed, relationships are not teleologically aimed at procreation. Celibate relationships are therefore within the orbit of sexuality, but so too would be a revisionist case for same-sex relations. Hill contends Song makes too much of the non-procreative dimension of relationships in the age of the church. In other words, Song has too realized of an eschatology. He also thinks Song’s view is too tied to an identity that has been subsumed under one’s baptismal identity.

Wesley Hill calls for what he has called “spiritual friendship.” Gay Christians are to love and to be loved; we have so eroticized love that many don’t comprehend other forms of love and friendship; same sex love and same sex intercourse then need not be identical. Wesley calls for more permanent commitment and friendship. He again appeals to Aelred and CS Lewis: that is to the contribution of the gay or lesbian Christian to our Christian community.

December 21, 2016 The War on Christmas: Christmas Crusades (Jonathan Storment)
Recent Comments
31 Comments | Leave a Comment
"Avoidance of these verses is at the heart of faulty conclusions. Humanistic interpretations are why ..."
Glenn Harrell What To Say When Someone Says ..."
"I think what you should say is: "I don't want to kink shame, but that's ..."
Spirit Plumber What To Say When Someone Says ..."
"Jesus dying temporarily for our sins doesn't really make much sense. Here's why:Let's say I ..."
C Nault What is a “Sacrifice of Atonement”?
"Any updates on when it will be released???"
Brian Kelly The “Second” Testament
Browse Our Archives
get the latest from
Evangelical
Sign up for our newsletter
POPULAR AT PATHEOS Evangelical
1