Jesus Creed Books of the Year 2016

Jesus Creed Book of the Year 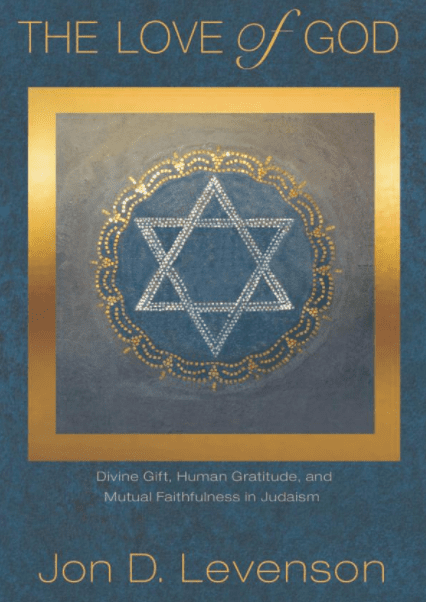 I have not yet blogged about this brilliant Jewish scholar’s book but I read it recently and it zoomed to the top of the list for this year’s award. The book zeroes in on the significance of connecting love (in the Shema) to the covenant, the covenant to ancient near eastern treaties, but even behind that treaty to family relationships — hence, love is not only the active life of living up to the covenant but also affective. Levenson is one of the masters of biblical scholarship; he’s a master of not only of the Old Testament but also of rabbinic studies so that he takes the idea of love from the origins all the way into helpful clarifications in the rabbis. Loved this book; I’m sure you will to.

My second Book of the Year is Ruth Tucker, Black and White Bible, Black and Blue Wife: My Story of Finding Hope after Domestic Abuse. I cannot say I loved this book; I can say it mesmerized me and pierced me about what the church needs to be doing more and more. It made me admire Ruth for finally telling her story. One cannot read Ruth’s book without being changed and challenged.  It is in other words the Worst Great Book of the Year for the Jesus Creed blog.

Enter the Bible, and in particular, the American Bible Society, and it should not take long to see in the picture to the right an open Bible in one hand and American flag in the other. A recent and exceptional book by Messiah College historian, John Fea, called The Bible Cause: A History of the American Bible Society, tells this story through one institution — the American Bible society — but in so doing Fea demonstrates the constant intersection of Bible and nation building. I recommend this book for all churches and for all schools, colleges and universities. The impact of the ABS is of magnitudes and often enough totally unknown. Fea is an exceptional historian of the church in America. His expertise in connecting ABS to American church history is all over this book. Those who read the New Testament in Greek or the Old Testament in Hebrew or the Septuagint in Greek read from an ABS or United Bible Societies produced edition. Many of the most important tools used in Bible studies today were produced by or in cooperation with the ABS. Every major translation of the Bible today translates the Hebrew and Greek texts produced in conjunction with ABS and UBS. This alone justifies the importance of knowing the story told by Fea. 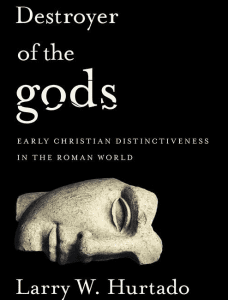 Three books battled my mind for top billing in Biblical studies, and I chose to exclude all commentaries for this category of books. But one book rose to the top because I think it shed light not only on the Bible but the first 2-3 centuries of church history, and that is Larry Hurtado’s Destroyer of the gods: Early Christian Distinctiveness in the Roman World. Here we find Hurtado exploring what made the Christians distinct — not unique for they always were like their environment in so many ways — and he explores such topics as faith, identity, bookishness, and behavior (or ethics). Destroyer of the gods is simply a delight to read. My thanks too to Carey Newman at Baylor University Press for acquiring and publishing books like this.

How we read the Bible, which also entails how we connect Bible to the world and to the state (in this election year especially), ought to shape our theology more, and because he has done this well I give special mention to John Nugent, Endangered Gospel: How Fixing the World is Killing the Church. This book creates a special new shape to the Bible’s narrative while it keeps its eyes on the implications of how we read that narrative for how the church is understood. Nugent courageously keeps his eye on the centrality of the church.

Every year Tom Wright writes something that everyone talks about and reads, and this year it is his reframing of the doctrine of atonement into a Passover-shaped narrative. The book is The Day the Revolution Began: Reconsidering the Meaning of Jesus’s Crucifixion. Many pastors and lay folks loved Wright’s Surprised by Hope and this book matches that book in connection to the troubled mind of many on how we talk about the cross. As always, a fairly easy read while Wright seeks to undo the damage of some unfortunate moves in the history of atonement theory.

One must send up a bright flag for the sudden appearance — Marilynne Robinson-like — of two new books by E.P. Sanders: both Paul: The Apostle’s Life, Letters and Thought as well as his Comparing Judaism and Christianity: Common Judaism, Paul, and the Inner and Outer in Ancient Religion deserve pride of place. But, too, Fortress reprinted his amazing study Judaism: Practice and Belief, 63 BCE — 66 CE. I read everything Sanders writes so these are a feast for me.

Beverly Gaventa has whetted my appetite for her forthcoming Romans commentary by putting her Earle Lectures into print in the aptly titled When in Romans. Here are three well written studies/chapters, each of which illustrates the potency of the apocalyptic Paul approach to reading Paul. I will be doing more with Beverly’s book on this blog shortly.

I am not as conversant with the constant publication of books in historical Jesus studies anymore, but I was asked to read one for review in Interpretation and I found Brant Pitre’s Jesus and the Last Supper a delightful read, but even more both a precisionist’s delight when it comes to methodological proposals as well as a theological adventure. I had a good conversation with Brant and Matthew Bates (whose Salvation by Allegiance Alone is coming out this Spring — and it is one worth ordering in advance and reading as soon as it hits the mailbox) in San Antonio, two young scholars with gobs to offer to the church and academy. I confess I have not yet read Bates’s new The Birth of the Trinity, though I will in 2017.

Commentary of the Year 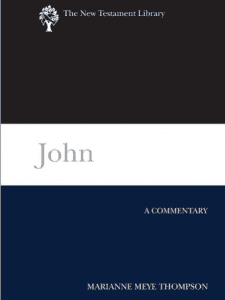 It is all but impossible to blog through a commentary without it becoming a 40 part series, but all year long Marianne Meye Thompson’s exceptional New Testament Library commentary on John has been percolating on my desk waiting to be mentioned. But John: A Commentary has been the best commentary I’ve read this year. Exquisitely written, theologically sensitive, conversant with the literature without letting it get in the way, useful for the pastor, the student and the serious Bible reader — well I could go on but this is one for your shelf and you can remove two or three others if you have this one!

Along with Dunn, mention needs to be made of three new Story of God Bible Commentaries on the Bible. Michael Bird’s robust and path-finding-between-the-options Romans, Mark Roberts’ pastorally ready and theologically excellent Ephesians, and Tremper Longman’s judicious study Genesis.

For those who wonder why most scientists (including Christians) are adamant about the vast age of the earth, a group of primarily Christian scientists have crafted a book with full color pictures and essays presenting their scientific and Christian view of the canyon, The Grand Canyon, Monument to an Ancient Earth: Can Noah’s Flood Explain the Grand Canyon? The book is easy to read (not heavy in scientific jargon), with abundant pictures and diagrams to educate Christians about geology and the shortcomings of flood geology.

How to Read Job by John Walton and Tremper Longman III. Although technically not a “science and faith” book it does contain a nice discussion of ancient cosmology and the problems arising from natural processes such as genetic mutations in creation.  I have been leading a discussion using this as a guide – with excellent response … comments like “finally the book of Job makes sense.” 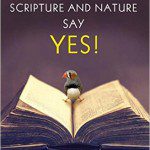 December 29, 2016 Rejecting Either/Or (RJS)
Recent Comments
7 Comments | Leave a Comment
"1) Yes, male was created first. No, this was not unfair to the female. Rather ..."
NorrinRadd Context, Context, Context
"Wow, one year later and you still want to debate? let me copy and paste ..."
Elca Can Egalitarians and Complementarians Find Unity?
"So then are you prepared to repent of calling us "intellectually dishonest"?"
NorrinRadd Can Egalitarians and Complementarians Find Unity?
"We maintain that there are obvious physical differences. We understand that there are also psychological ..."
NorrinRadd What about Women Elders?
Browse Our Archives
get the latest from
Evangelical
Sign up for our newsletter
POPULAR AT PATHEOS Evangelical
1

Gentile Christian Identity-- Part Thirteen
Q. At the end of this stimulating book you suggest that Gentile...
view all Evangelical blogs
What Are Your Thoughts?leave a comment
Copyright 2008-2020, Patheos. All rights reserved.