Ray Ortlund, a former colleague of mine at TEDS and one with whom I shared many commutes to school, recently put on no less a site than Instagram a comment about Bible reading and translations, and I wish to agree and disagree. 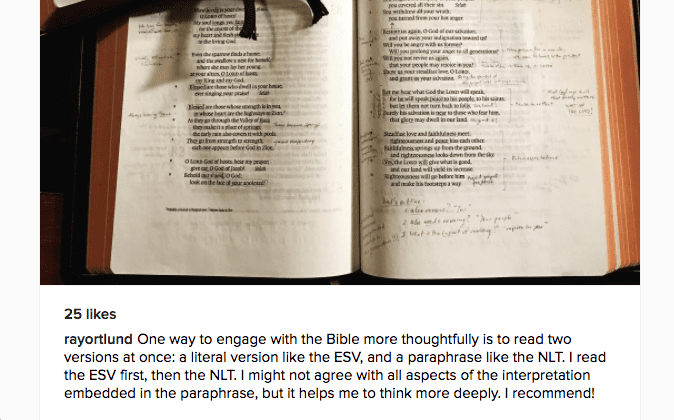 First, the agreement. Yes, by all means, compare translations. I don’t know Ray’s audience but there’s some serious limitations with comparing Bible translations. Creating alternative translations leads most to choose which one they like most. How can one decide which is better without ability to read the original languages? I’ve heard folks from pulpits choose translations they prefer when I knew for a certainty that person (1) couldn’t read Greek or Hebrew or Aramaic and (2) chose on the basis of personal preference.

But, I agree: it is good to see how others have translated the Bible. Various renderings often shed light.

Second, the disagreement. What in the world does “literal” mean and what does “paraphrase” mean and why connect “interpretation” with “paraphrase.” In which is a bit of tribalism and translation theory bound up with a preferred Bible — the ESV. (On tribalism, see this post.)

Bibles are more or less “literal” — all Bibles are. Not some are “literal” and others are “paraphrase.” Why? Because all Bibles are “interpretations.” Not just the so-called NLT paraphrase. By the way, the NLT is not a paraphrase in the traditional sense. Yes, The Message is more paraphrastic than the NIV or the ESV but even that is an exaggeration.

The ESV is a edited version of the old RSV. On the spectrum from — let’s say “wooden” or “word for word” or “formal equivalence” — to “thought for thought” or “dynamic equivalence” the ESV is to the left and the NLT is mediating while The Message is to the right. But to call the NLT a paraphrase is unfair to the NLT translators.

I’d like to contend today that most words are translated in all Bible translations with formal equivalence and that some words are translated more or less in a dynamic, or functional way. In other words, there isn’t really a radical commitment to dynamic equivalence — as if one can find some better way in English to the original languages “and” or “but” or “the” or “God.” Or a radical commitment to “formal equivalence,” as if the Greek word order can be maintained in English and make sense, though at times the NASB gave that a try (much to the consternation of English readers). No one translates “God’s nostrils got bigger” (formal equivalence) but we translate “God became angry.” There are some expressions that can’t be translated woodenly unless one prefers not to be understood.

Two examples (NIV, ESV) of dynamic equivalence followed by a “literal” or “formal equivalence” in the KJV. Who’s paraphrastic now?

NIV: Therefore, with minds that are alert and fully sober, set your hope on the grace to be brought to you when Jesus Christ is revealed at his coming.

ESV: Therefore, preparing your minds for action, and being sober-minded, set your hope fully on the grace that will be brought to you at the revelation of Jesus Christ.

KJV: Wherefore gird up the loins of your mind, be sober, and hope to the end for the grace that is to be brought unto you at the revelation of Jesus Christ…