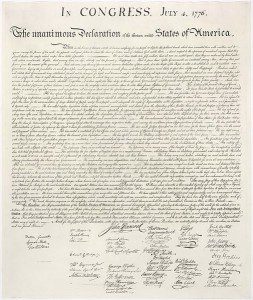 In our last post (Are We Morally Obligated) on Tim Keller’s recent book Making Sense of God: An Invitation to the Skeptical we dug into the issue of the foundation for morals … with a rather vigorous discussion in the comments. In the next chapter Keller digs in deeper, and suggests an important role for religious belief in general and Christian faith in particular.

Most Americans will recognize this paragraph.  It comes from the Declaration of Independence passed by the 2nd Continental Congress on July 4th 1776.  Today many Westerners would strike the phrase “by their Creator” and simply affirm that all humans are endowed with certain unalienable Rights.  The UN Universal Declaration of Human Rights merely lists these as self-evident (Keller cites this document) .  The rights and freedoms described are given a practical motivation – to preserve the peace for the good of all – but other than this they simply “are” inalienable rights. Many of them are distinctly Modern and Western in focus. “Article 18: Everyone has the right to freedom of thought, conscience and religion; this right includes freedom to change his religion or belief, and freedom, either alone or in community with others and in public or private, to manifest his religion or belief in teaching, practice, worship and observance.“

Many countries and peoples around the world see this document as a form of Western Imperialism. Why should people have a right to change religion? Why should involuntary marriage be prohibited? Why isn’t torture a valid way to get information? (oh wait, maybe even some Westerners have problems with this one!) and we could go on. The more fundamental question is clear … why do humans have any “rights” at all?  Capacity arguments are often advanced, but these leave the very young, the very old, and the disabled at risk. Why do these people have rights?

Keller discusses two case studies for the foundation of human rights.  The first, advanced by Harvard Philosopher John Rawls is based on the notion that  rights should be “status blind.” That is, a rational society will base inalienable human rights on the best outcome for everyone no matter their station in life. If we had to set up a society and then were placed into it by a random luck of the draw, how would we arrange the structure of the society?  Keller, citing other writers, including a Harvard political philosopher, suggests that this is insufficient because all notions of justice involve judgments of one sort or another.  The argument that human rights are “rational” and trampling on rights “irrational” simply doesn’t work. 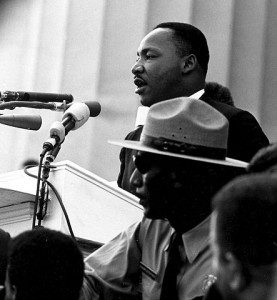 The second case study comes from Martin Luther King Jr.  His argument for desegregation wasn’t based on a rational argument. It was based on a deeply moral argument.  Human rights are only inalienable if they are real – endowed in the nature of the cosmos – rather than merely rational.

Drawing on the biblical teaching that every human being is created in the image of God (Genesis 1:26-27), he wrote that God’s image in us gives every person

The Bible gives us the strongest possible foundation for the idea of inalienable human rights. Your neighbor comes into your presence with an inherent worth, an inviolable dignity (Genesis 9:6). Martin Luther King Jr. did not ask white America to make African Americans free to pursue rational self-interest, their own individual definitions of a fulfilling life. Rather, quoting Amos 5:24, he called them to not be satisfied until “justice rolls down like waters, and righteousness like a mighty stream.” The secular approach of Rawls pales before the Christian foundation for justice used by Dr. King. (p. 199)

After exploring modern and post-modern foundations (or lack thereof) for justice and human rights, Keller concludes that “without any belief in objective moral facts, there is no way to build a program of justice.” (p. 204)

A nonoppressive absolute. This isn’t to deny that religion has been used as a bludgeon of oppression rather than a tool for justice. Certainly the Christian church has used “biblical truth” to marginalize and demonize peoples. Other religions have been equally oppressive at times. Keller finds that Christian faith does offer a way forward.   He uses Richard Bauckham’s “illuminating essay” Reading Scripture as a Coherent Story in The Art of Reading Scripture to frame the discussion.

First, the Christian story does not give us “all the answers.”  Keller turns to one of my favorite books as illustration. “Job’s friends smugly think they have the ways of God figured out … However, at the end of the book of Job, they are condemned by God. God alone has the full perspective on things. We only see in part.” (p. 205) We should retain humility and realize that we do not have all the answers.

Second, the Christian story does give hope for justice, but also makes it clear that we do not establish this justice. “For a Christian, then, redemption cannot be a utopian hope in inevitable progress or in human ingenuity, but only in God, and in God’s time.” (p. 206)

Finally (and most importantly), the Christian story is a story of reversal. God repeatedly chooses the lesser person, second or later sons: Isaac not Ishmael, Jacob not Esau, Joseph and Judah not Reuben, Moses not Aaron, David not the older sons of Jesse, and so forth. The OT affirms justice for the poor, widow, the orphan, and the foreigner among you. The ultimate reversal is a Messiah who is crucified by the power structure for the sins of the people.

The Bible is not primarily a series of stories with a moral, even though there are plenty of practical lessons. Rather, it is a record of God’s intervening grace in the lives of people who don’t seek it, who don’t deserve it, who continually resist it, and who don’t appreciate it after they have been saved by it. (p. 209)

Keller may go overboard a little here, but there is no doubt that the Bible is the story of the work of God with his fully human people. The heroes in general have obvious feet of clay. David, a man after God’s own heart, failed miserably on occasion.

Justice for the poor and oppressed is at the heart of God’s story and the Christian story.  Keller is clear here.

Remarkably, then,  we can conclude that a professed Christian who is not committed to a life of generosity and justice toward the poor and marginalized is, at the very least, a living contradiction of the Gospel of Christ, the Son of God, whose Father “executes justice for the oppressed, who gives food to the hungry” (Psalm 146:7). Bauckham says, “Distortion of the biblical story into an ideology of oppression has to suppress the biblical meaning of the cross.” All of these characteristics of the biblical story make it “uniquely unsuited to being an instrument of oppression.” (p. 210)

If there is no Creator, if we are not all made in the image of God, then perhaps so-called “universal human rights” are simply another form of Western cultural imperialism.  Good for us, but no ground for imposing them on other societies in other situations.  But perhaps the framers of the Declaration of Independence (even those who were rather liberal in their belief) and Martin Luther King Jr. have it right. Inalienable human rights are universal because we are all, male, female, young, old, of all nations and races, created in the image of God.  Of course, even those who signed the declaration got it wrong in places … as many were slave holders and/or oppressive of other creeds or races. Nonetheless – the foundation is there.

What is the foundation for human rights?

Is a violation of human rights immoral or irrational?

Why are they universal (or aren’t they)?

January 17, 2017 The Great Gospel Experiment
Recent Comments
14 Comments | Leave a Comment
"Avoidance of these verses is at the heart of faulty conclusions. Humanistic interpretations are why ..."
Glenn Harrell What To Say When Someone Says ..."
"I think what you should say is: "I don't want to kink shame, but that's ..."
Spirit Plumber What To Say When Someone Says ..."
"Jesus dying temporarily for our sins doesn't really make much sense. Here's why:Let's say I ..."
C Nault What is a “Sacrifice of Atonement”?
"Any updates on when it will be released???"
Brian Kelly The “Second” Testament
Browse Our Archives
get the latest from
Evangelical
Sign up for our newsletter
POPULAR AT PATHEOS Evangelical
1