God Intended It For Good (RJS) 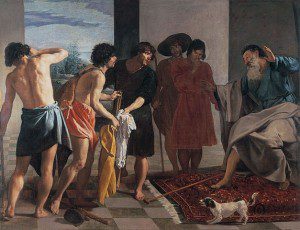 It has been awhile since the last post on Genesis, but it is time to step back and wrap up the story with the Joseph narrative, chapters 37, 39-50. The story is well known – long a Sunday School and sermon favorite.I brings the narrative of Genesis from the patriarchs to the opening situation in Exodus. The sons of Jacob move to Egypt where they become the people of Israel under bondage and in need of deliverance.

I’ve heard sermons preached along these lines – but they don’t ring quite true.

Another telling has Joseph something of an arrogant brat in his youth, spoiled by his father’s favoritism. His brothers scheme to get rid of him and through the experience he grows in wisdom and in the fear of the Lord. He is prepared through the grace of God for the leadership role he assumes. Walter Moberly comes down on this view in The Theology of the Book of Genesis. After dispensing with some extremes, concludes “there is surely still real value in seeing Joseph as a wise person who models important dimensions of what wisdom may entail – not only the transcending of youthful arrogance and egotism through allowing suffering to have a purifying effect under God but also having the ability to live with integrity under pressure, with a sense of accountability to God that dispenses with any kind of doctrinaire approach to living well.” (p. 236-237)

Joseph remains a role model without the artificial imposition of some kind of perfection. It is hard to find a hero in the Scripture who doesn’t exhibit a shortcoming or two (Daniel perhaps?). It makes them real and their example important for our everyday life.

There are two other issues raised by the Joseph narrative that have raised questions for many readers: his treatment of his brothers when they come for food during the famine and his claim after the death of their father: You intended to harm me, but God intended it for good to accomplish what is now being done, the saving of many lives. (50:20) 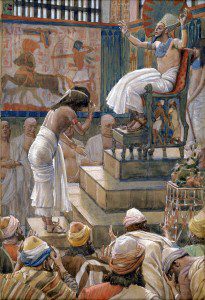 Joseph’s Treatment of His Brothers. Both Bill Arnold (Genesis (New Cambridge Bible Commentary)) and Walter Moberly dig into this question. The encounter starts when the 10 half-brothers of Joseph come to Egypt.

Although Joseph recognized his brothers, they did not recognize him. Then he remembered his dreams about them and said to them, “You are spies! You have come to see where our land is unprotected.” (42:8-9)

Did Joseph fail to acknowledge his brothers and identify himself out of a desire for revenge, teaching them a lesson, or acting in wisdom to test them?  Many commenters see a measure of revenge in what appears to be a cat and mouse game.  Demanding that Simeon stay behind and they bring Benjamin when they return; putting the money in their bags and then the cup in Benjamin’s. It seems rather cruel.

Both Moberly and Arnold prefer an interpretation that Joseph is testing his brothers. He wisely wants to know if they have truly matured and are acting honorably. Arnold summarizes the first encounter and Joseph’s initial delay:

I believe that we are to conclude that Joseph simply does not trust his brothers. And why should he? Perhaps Benjamin is not standing here with them now because they have sold him into slavery or worse. Perhaps Jacob too is dead. Joseph at first seems merely to stall for time while he sorts out what he should do. Then he seems intent to ensure that Benjamin and Jacob are not also mistreated by this lot, and wants only to discern whether these ten can be trusted. (p. 353)

The test seems strange but is fitting. “If you are honest men, let one of your brothers stay here in prison, while the rest of you go and take grain back for your starving households.  But you must bring your youngest brother to me, so that your words may be verified and that you may not die.” (42:19-20)  Would the brothers sacrifice Simeon, leaving him a prisoner in the land of Egypt never to return? Because the famine was severe Jacob was forced to let them return with Benjamin along. Now Joseph really puts them to the test – will they sacrifice Benjamin for their own freedom?

This trial of their character turns this time back to the original crime against Joseph himself, in which his half-brothers, working in solidarity, acted in hatred, vengeance and greed to inflict pain upon a son of Rachel. Has anything really changed? Have they come to terms with their father’s favoritism? Or now with Simeon released, will they take the food and extra money, and run, abandoning Benjamin forever? Perhaps they would simply tell their father that a wild animal attacked Benjamin on the journey home. Joseph has devised this test to determine their character, to know the truth. (p. 358-359)

Judah, the very brother who first suggested selling Joseph into slavery, this time rises to the occasion, concluding a long speech: “Your servant guaranteed the boy’s safety to my father. I said, ‘If I do not bring him back to you, I will bear the blame before you, my father, all my life!’ Now then, please let your servant remain here as my lord’s slave in place of the boy, and let the boy return with his brothers.” (44:32-33)  This is an important part of the story – and, Arnold suggests, an important part of the narrative history of Israel.

Judah has become a representative for the family. His willingness to sacrifice his freedom for the sake of his father and his brother Benjamin sets him justifiably in a place of honor among the sons of Jacob. Judah has changed; he is not the same individual we encountered in Gen 38. And the presence of all the brothers signals a new day. They are resolved to treat Rachel’s younger son differently than they did his brother, Joseph. (p. 360)

From Judah (and his offspring with his daughter-in-law related in Gen 38) comes the line of David.

God intended it for good. Finally, the passage in this entire narrative that raises the most serious questions (for me at least). After the death of Jacob, the brothers fear that Joseph will turn on them. He allays their fears with an off-quoted statement: But Joseph said to them, “Don’t be afraid. Am I in the place of God? You intended to harm me, but God intended it for good to accomplish what is now being done, the saving of many lives.” (50:19-20) How are we to understand this statement. Did God orchestrate events, including the pain and suffering they entailed, simply to save the Israelites from a famine he could have prevented in the first place?  Perhaps a better interpretation is not that God orchestrated sin, but that humans cannot thwart his plans. Arnold calls this the “overarching theological conviction of the Joseph Novel: God’s purposes are not thwarted by human sin, but rather advanced through it by his good graces. The hand of God is seen, not only in clearly miraculous interventions and revelations, but also in the working out of divine purposes through human agency, frail and broken as it is.” (p. 361)  Genesis 50 makes this clear as the book wraps up the story.

Using emphatic syntax, “You certainly intended, …” Joseph does not deny their evil intent, but the word play, using the same verb with different idioms, highlights the way God has turned the evil intent of humans into an opportunity to accomplish his good purpose. They planned harm (hāšabplus preposition ʾal), but God reconfigured their evil and produced good from it (hāšab plus preposition lĕ). … Using the antithetic dyad “good and evil” as a paradigm, the text lifts even the wrong and unethical behavior of humans as something God is capable of comprehending as an opportunity for good. (p. 388)

Genesis 50:19-20 should not be used as a catch-all propositional truth thrown at people in times of pain. As though every evil and tragic occurrence is part of God’s divine plan. This just isn’t so, but the truth remains that God can work, even through the evil actions of humans. Humans cannot thwart his plans. The people of Israel will be formed and shaped in Egypt.

This is a fitting conclusion to the book, and to this short study of Genesis.

What questions are raised by the Joseph story?

What role does this play in the over-arching story of Israel?

January 19, 2017 How Deep will that Wall Go?
Recent Comments
8 Comments | Leave a Comment
Browse Our Archives
get the latest from
Evangelical
Sign up for our newsletter
POPULAR AT PATHEOS Evangelical
1

That's Not How Any Of This...
Preventing Grace
Related posts from Jesus Creed