Michael Licona: The Gospels as they Really Are

Michael Licona: The Gospels as they Really Are January 27, 2017 Scot McKnight 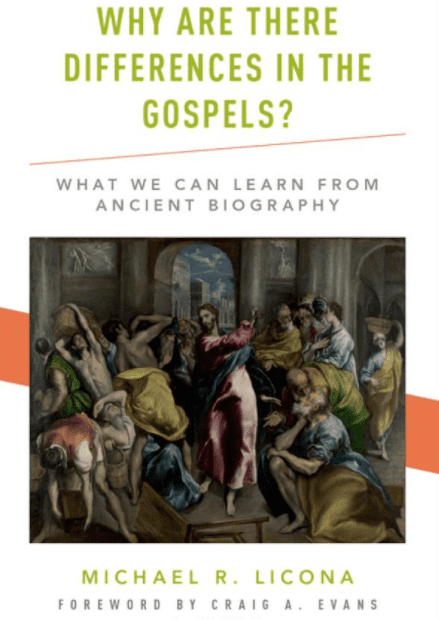 Years ago, when my research was on the Synoptic Gospels, I composed a list of how the Evangelists “edited” their sources. Using the standard theory of their relationships (Mark first, then used by both Matthew and Luke, both of whom also used another source called “Q”), I came up with the following sorts of edits by the Evangelists:

This list with an illustration or two or three of each can be found in my first book Interpreting the Synoptic Gospels. It was very much a beginning professor’s textbook and it would be fun to edit the whole thing but that’s for another day and another discussion.

With this early list of the kinds of redaction we see in the Gospels I was curious what list Michael Licona would come up with in his new and important book Why Are There Differences in the Gospels? Licona, instead of simply examining how Matthew and Luke used their sources, examines how Plutarch presents in his Lives two or more accounts of the same person. In other words, instead of seeing how Plutarch altered sources, Licona looks at how Plutarch treats himself!

The Synoptic Gospels reveal two stubborn realities: differences and similarities. The former can unnerve some readers because they’d prefer they all be the latter! Not so any careful reader of the Gospels knows. So here’s but one example. Here is Mark’s version of Jesus’ instructions to the twelve on their mission:

Mark 6:7 Calling the Twelve to him, he began to send them out two by two and gave them authority over impure spirits. 8 These were his instructions: “Take nothing for the journey except a staff—no bread, no bag, no money in your belts. 9 Wear sandals but not an extra shirt. 10 Whenever you enter a house, stay there until you leave that town. 11 And if any place will not welcome you or listen to you, leave that place and shake the dust off your feet as a testimony against them.” 12 They went out and preached that people should repent. 13 They drove out many demons and anointed many sick people with oil and healed them.

10:5 These twelve Jesus sent out with the following instructions: “Do not go among the Gentiles or enter any town of the Samaritans. 6 Go rather to the lost sheep of Israel. 7 As you go, proclaim this message: ‘The kingdom of heaven has come near.’ 8 Heal the sick, raise the dead, cleanse those who have leprosy, drive out demons. Freely you have received; freely give. 9 “Do not get any gold or silver or copper to take with you in your belts— 10 no bag for the journey or extra shirt or sandals or a staff, for the worker is worth his keep. 11 Whatever town or village you enter, search there for some worthy person and stay at their house until you leave. 12  As you enter the home, give it your greeting. 13 If the home is deserving, let your peace rest on it; if it is not, let your peace return to you. 14  If anyone will not welcome you or listen to your words, leave that home or town and shake the dust off your feet. 15 Truly I tell you, it will be more bearable for Sodom and Gomorrah on the day of judgment than for that town.

Where did Matthew “get” that set of instructions in italics? It’s not in Mark. The parallel in Luke 9 only tells them to heal and exorcise and preach about the kingdom, while the earlier parallel in Mark 3 has preach and exorcise. But Matthew has a complete list of things to do. Where did Matthew get this? (1) Was he there and used his memory? (2) Did he compose Matthew 8-9 and so use what Jesus did to color what Jesus told the twelve to do? (3) Did he use Mark and Luke and maybe some Q (Luke 10) and then add a bit on his own? (4) Or, or, or?

Licona, I believe, helps us.

First, he clarifies Plutarch’s compositional devices. What are those devices? He lists these:

Most important is this: Plutarch’s Lives are written as rough contemporaries of the Gospels and they are both “lives” (biographies, bioi) and hence seeing how one operates (Plutarch) may provide categories for understanding how the Evangelists were operating. The only assumption here would be that the conventions for biographical writing would be similar. Licona is accurate in this assumption/conclusion. A good question that would be asked is “What were the conventions of ancient biography that would be assumed/practiced by the NT Evangelists?”

This is a good paragraph from Licona that shows how ancient biographers worked:

“Sometimes Plutarch will redact elements of a story in order to support the portrait he is painting of his main character. This may result in placing the main character or his adversary in a light that is more or less favorable. Even if Plutarch had no credible reports supporting his redaction, he still believed the point he was emphasizing was true. Plutarch may also have altered a detail slightly to create irony. He occasionally portrays motives differently, usually in a manner that provides some illumination on the protagonist’s character in that Life” (109).

This is a good reminder: “In light of instructions for good literature writing by Lucian and Quintilian, we determined that historians were permitted to craft peripheral details and connect events synthetically in order to produce a narrative that flows smoothly” (110).

Second, he clarifies how the Evangelists compare to Plutarch and Licona does this by examining the compositional techniques of the Evangelists. He patiently examines sixteen passages and these are some of his major conclusions:

“We observed that they substitute words and phrases, alter syntax, change the inflection of a term from singular to plural (or vice versa), add in order to intensify, clarify, translate, or expand upon the thought. … On two occasions, Matthew converts Jesus’s one-sided address to his antagonists to a dialogue with them” (182-183).

“Noticeably absent are clear examples where we can recognize the evangelists following the law of biographical relevance. The reason is because all four Gospels feature the same main character, Jesus” (183).

“The evangelists occasionally displace an event from its original context and transplant it in another either to raise tension in the narrative or to link it with another story involving the same characters. They simplify, though not often. More than the other evangelists, Matthew occasionally transfers what one person said to the lips of another. And the evangelists occasionally change the recipients being addressed. They compress and probably conflate stories. Because Matthew is known to abbreviate often, it should come as no surprise to observe that he compresses more often than the other evangelists. Luke and John make use of literary spotlighting, and Mark and Matthew probably do. However, spotlighting is not nearly as prominent in the Gospels as we observed in Plutarch’s Lives. Yet, spotlighting may be occurring more often than is within our ability to recognize it, since Jesus is the main character in all four Gospels” (183-184).

Third, he offers some conclusions, and these are most important when it comes to the nature of the Synoptic Gospels, their integrity and reliability as sources, and how these Evangelists did what they did.

“Many who believe the biblical authors were divinely inspired also assume those authors must have written with the degree of accuracy and almost forensic precision we desire and expect today. However, this would require those authors to have stepped out of their culture and to have thought in terms of literary conventions that were in existence—as we see in the work of Asconius—but not valued as highly as other conventions” (201).

Licona’s book is the most important book I’ve ever read on the literary techniques of the Evangelists. There is no book that has this finesse based on the Gospel genre as a “biography” and hence this study can be used with confidence in classes engaged in the Synoptic Gospels. His conclusions about how the Evangelists did what they did are reliable and give us yet one more clear glimpse in how to understand the nature of the Gospels.

January 27, 2017 Is the Book of Acts Loveless?
Recent Comments
8 Comments | Leave a Comment
Browse Our Archives
get the latest from
Evangelical
Sign up for our newsletter
POPULAR AT PATHEOS Evangelical
1