Where Have All the Skinny Jeans Pastors Gone?

American pastors aren’t as young as they used to be.

As clergy live longer and stay in ministry longer, the average age of Protestant senior pastors has risen to 54—a decade older than 25 years before, when the average age was 44.

Now, just 1 in 7 pastors leading congregations is under 40, according to Barna Group’s 2017 State of Pastors project.

In the new report, Barna president David Kinnaman called the aging pastorate “one of the most glaring challenges facing the church today.”

The pulpit has been graying for decades. In the ’60s, a majority of pastors were under 45. In 2017, most are over 60. The age shift stems from evolving career expectations and difficulty passing leadership on to millennial-aged pastors, Barna reported.

The research, conducted in partnership with Pepperdine University, represents surveys and interviews with 14,000 Protestant pastors.

From Steven McAlpine, from whom I take the title of this post:

Let me add a tenth to that – a theological reason – A Poor Ecclesiology.  And it’s this tenth one that could be allowing the other nine listed above to set the agenda.

How so?  Well, for the past fifteen to twenty years we have seen a plethora of books, conferences, blogs, movements etc, that have not only questioned the special nature and role of the gathered people of God, but have actively pushed against it. Go to your local Christian bookstore and you realise that when the kingdom is everything, then nothing is the kingdom.  The church is no longer viewed as the locus of God’s work on earth.  And where it is, it’s supposed to be completely fluid to the point that it’s hard to see where the church begins and the world ends, and vice versa.

The idea that the Kingdom can be experienced, viewed, seen, tasted in a gathered community around King Jesus called church has fallen out of fashion – and fast.  Faced with a pendulum swing that located all godly endeavour around church work (secular work being only good for providing money for church to do ministry), the pendulum has swung hard the other way.

This pushback against the gathered, local church stated that kingdom work was whatever social justice endeavour you could apply yourself to.  The apparent truth of this was doubled down by the increasing hostility towards the established church by the culture.  So not only was there a poor ecclesiology from within, there was suspicion and animosity from without.  Together these were a pincer that squeezed the desire out of many younger skinny jeans Christians (in the almost immortal words of Scott McKnight) to pursue pastoral ministry vocationally. Nowadays church based pastoral ministry has all of the allure of  three-day-old smashed avocado.

Let’s face it. There were no kudos to be had in doing work for Jesus that involved preaching the Word, pastoring the flock or creating frameworks for church leaders to flourish and do evangelism.  Especially no kudos for doing evangelism.

But working in a Third World setting bringing “real change”?  The world loved it because it was doing it too and it didn’t involve any of that crazy proselytising that is so old fashioned, bigoted and imperial.

And the church increasingly loved it too as you stood out the front prior to your trip and narrated how you were “going to make a real difference” in the world rather than proclaiming a message that was hopelessly mired in western theological assumptions anyway.  You’d be out on the frontline doing real change, while they’d be sitting in meetings, preaching increasingly irrelevant sermons and fattening already well-fed parishioners who should be giving more, who should be spending less time with their families and more time with their neighbours, and who should be ashamed of themselves more often. …

Then if you think it’s right, as opposed to whether or not you like it, (those two things are different sometimes you see), then gird your skinny jeans loins and think about what it might mean to invest in local church ministry for the next thirty to forty years as the culture presses harder against you, the congregation grows increasingly frantic, and the voice of gospel proclamation falls increasingly silent.  Compared to that, digging wells in Africa is easy.

February 1, 2017
The Scandal of the Evangelical Soul
Next Post

February 1, 2017 Already by Six Years Old
Recent Comments
21 Comments | Leave a Comment
"'This renewal began first with the renewal of the people of God (chapter 5 or ..."
Kostya2 Putting the Bible Together
"In Christ, there is no Jew or Greek, male or female."
Silverwolf13 Go Home or At Home?
"I just started to read about Scot Mcknight! His arguments are good.However, I recommend Scot ..."
Yechan Namgoong Tim Keller under the Eye
"" if it be Your will" 1 John 4:14,15 says, 14And this is the confidence ..."
disqus_5T2jXBEN10 JesusCreed.org Blog Prayer
Browse Our Archives
Related posts from Jesus Creed 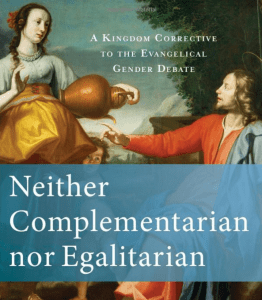