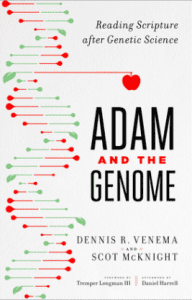 From Dennis Venema, Scot McKnight, Adam and the Genome

That Adam takes on a life of his own, and often his partner Eve is neglected in Jewish traditions, as the Hebrew, Israelite and Jewish traditions unfold in history. Every Jewish understanding of Adam begins with their appropriation of this literary Adam. This category is safe, wise and avoids the immediate stimulation of some thinker’s amygdala fear that the Bible is about to fall apart. On the literary Adam we can all agree, even if most of us will not be satisfied. It won’t hurt to begin with “the Adam of the Bible.”

Once we begin with “literary” Adam we can discern from the text in context what other terms — Fallen Adam and Eve, Sinful Adam and Eve, etc — would be accurate. My use of “literary” is not a subtle ploy to sneak an unhistorical Adam in through a side door but a rock-bottom necessity: the Adam we all begin with is the Adam (and Eve) of Genesis 1-4.

Now to the clips from the book itself: Adam and the Genome

The adjective most popular in the Adam (and Eve) discussion is historical. I’m frequently asked when this science faith discussion arises, “Do you believe in the historical Adam?” For some that adjective will give the questioner the right word and the answer will determine if the answerer is safe, faithful, orthodox, evangelical and all sorts of other adjectives. We cannot dodge that adjective. One can pretend “historical” before Adam doesn’t matter just as one can pretend it is all that matters, and both views will end up dodging something. Here’s how important this is: Zondervan just published a book edited by Matthew Barrett and Ardel Caneday called Four Views of the Historical Adam. Here are the titles to the chapters:

Notice the importance of the adjective! (Notice, too, that there is evidently no need for Eve in this one.) The entire debate is sorted out by whether or not one believes in the historical Adam. Adjectives evidently matter when it comes to Adam and Eve.

So I want to contest the appropriateness of this adjective as the controlling issue but let’s first clarify who this historical Adam and Eve. The adjective historical when attached to Adam and Eve means:

I have big doubts that when Genesis 1—2 was written any of that or at least most of that was what was meant by “Adam and Eve.” I’ll put it in terms of my principles: I’m not sure we are being respectful or honest with the Bible, and therefore the Scripture principle comes into play, too, when we make Genesis 1—2 speak about something it was not speaking about: biology (for that is modern science), transmission of sin (not stated explicitly in Genesis), genetics (modern science), and the like. I don’t dispute that the adjective has an important role to play in our theology, but I do dispute that what most mean by historical Adam is what Genesis meant in its world. When we use the adjective historical with Adam or Eve we must know the author intended all or most, or at least one and two, if we want to use historical accurately.

[i] This has been a passionate concern for Karl Giberson. See Karl W. Giberson, Saving the Original Sinner: How Christians Have Used the Bible’s First Man to Oppress, Inspire, and Make Sense of the World (Boston, MA: Beacon Press, 2015), 27–43.

Again, these are clips from Adam and the Genome

February 2, 2017 Is it Reasonable? (RJS)
Recent Comments
51 Comments | Leave a Comment
Browse Our Archives
get the latest from
Evangelical
Sign up for our newsletter
POPULAR AT PATHEOS Evangelical
1