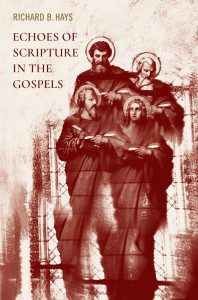 There are many important themes running through the Gospel of Matthew. One of the most significant highlighted by Richard Hays in Reading Backwards: Figural Christology and the Fourfold Gospel Witness and the larger book Echoes of Scripture in the Gospels is the “inclusio” (a literary device which consists of creating a frame by placing similar material at the beginning and end of a section) that defines the entire book. (All quotes below are from Echoes of Scripture in the Gospels.)

But after he had considered this, an angel of the Lord appeared to him in a dream and said, “Joseph son of David, do not be afraid to take Mary home as your wife, because what is conceived in her is from the Holy Spirit. She will give birth to a son, and you are to give him the name Jesus, because he will save his people from their sins.”

All this took place to fulfill what the Lord had said through the prophet: “The virgin will conceive and give birth to a son, and they will call him Immanuel” (which means “God with us”).

Both names here are significant. The baby is Jesus, Yehoshu’a or Yeshua (Joshua) “God Saves” from the Greek transliteration Ἰησοῦς also used of Joshua in the Septuagint. He is also identified with Immanuel “God with us” a sign of both salvation and judgment in Isaiah 7. “In contrast to Mark’s circumspect indirection in identifying Jesus with the God of Israel, Matthew explicitly presents Jesus as the embodiment of divine presence in the world.” (p. 162-163)

Hays suggests, in fact, that if we have ears to hear we might also identify an echo here with Hosea 11 – God’s Son is called out of Egypt (Mt. 2:15) but in Hosea we also read of “the Holy One among you” who in compassion calls the people home.

Hosea 11:1-11 thus resonates richly with the Matthean Emmanuel theme: the God who called his Son out of Egypt is the same God who is present in their midst. And Matthew has already disclosed that the form of God’s presence is to be found in Jesus.

Literary resonances and echoes are frequently multivocal. Jesus is identified simultaneously with Israel and with the presence of God.

Then the eleven disciples went to Galilee, to the mountain where Jesus had told them to go. When they saw him, they worshiped him; but some doubted. Then Jesus came to them and said, “All authority in heaven and on earth has been given to me. Therefore go and make disciples of all nations, baptizing them in the name of the Father and of the Son and of the Holy Spirit, and teaching them to obey everything I have commanded you. And surely I am with you always, to the very end of the age.”

After the resurrection the one identified in the beginning as Yehoshu’a and Immanuel is now with us, possessing all authority in heaven and on earth, to the very end of the age.

Hays identifies a number of themes between these two passages that identify Jesus as the embodiment of divine presence on earth. 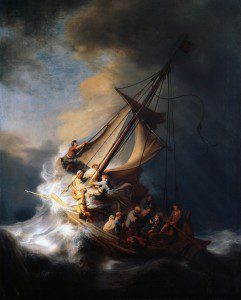 Then he got into the boat and his disciples followed him. Suddenly a furious storm came up on the lake, so that the waves swept over the boat. But Jesus was sleeping. The disciples went and woke him, saying, “Lord, save us! We’re going to drown!”

He replied, “You of little faith, why are you so afraid?” Then he got up and rebuked the winds and the waves, and it was completely calm.

The men were amazed and asked, “What kind of man is this? Even the winds and the waves obey him!”

Where Mark has ” Rabbi, don’t you care if we drown?” Matthew has the explicit call “Lord, save us!” The disciples call to Jesus in an urgent prayer for deliverance. Jesus is the one who calms the storm and the disciples are amazed. The wind and waves, who obey the Lord in Psalm 107, obey Jesus. 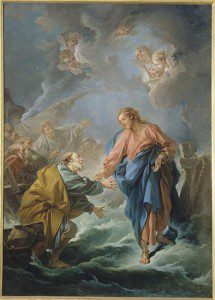 Worship. Even more telling is the later story in Matthew 14:22-33 where Jesus walks across the sea to their boat.

And when they climbed into the boat, the wind died down. Then those who were in the boat worshiped him, saying, “Truly you are the Son of God.” 32-33

In 28:8-9 and 16-17 we also read first of the women at the tomb and then the eleven on the mountain taking a posture of worship toward the risen Jesus. Hays concludes “… in and through these references to worshiping Jesus, Matthew is identifying him as nothing less than the embodied presence of Israel’s God, the one to whom alone worship is due, the one who jealously forbids the worship of any idols, images, or other gods.” (Echoes p. 167) Hays points out the contrast with the concluding temptation where Jesus responds “Away from me, Satan! For it is written: ‘Worship the Lord your God, and serve him only.’” (Mt 4:10) Hays continues: “Once this commandment has been forcefully set forth in the narrative, readers have little choice but to interpret Jesus’ acceptance of worship from other characters as an implicit acknowledgment of his divine identity.” (p. 167) 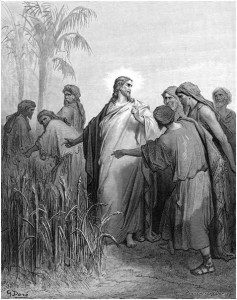 Greater than the Temple. Following a confrontation with the Pharisees over his disciples picking heads of grain and eating them (Mt. 12:1-8), Jesus states “I tell you that something greater than the temple is here.”

We are not told precisely what the “something greater” might be, but the inference lies readily at hand that it must be Jesus himself. What could be greater than the Temple other than the one to whom it is dedicated, the one who is worshiped in it? Matthew’s argument is in effect this: if Jesus is “God with us,” then his presence sanctifies the labor of those who work to serve him, even on the sabbath. Indeed, if Jesus is “God with us,” then his presence now takes the place of the Temple where the presence of God was formerly thought to dwell. (p. 168)

It seems likely that the Pharisees understood the implications. In the next story (12:9-14) Jesus heals a man on the Sabbath and “the Pharisees when out and plotted how they might kill Jesus.“

In this situation, Matthew emphatically locates the divine presence in the figure of Jesus himself, who promises (in a saying that anticipates the resurrection and the ending of the Gospel) to be forever present wherever his followers gather and invoke his name. In short, in Matthew 8:20 Jesus now declares himself, for the first time, to be the Emmanuel promised in the narrator’s opening fulfillment citation in 1:23. (p. 169)

My words will not pass away. Matthew 24:32-35 concludes with Jesus stating “Heaven and earth will pass away, but my words will never pass away.” The only words that can be considered timeless are the very words of God, a theological statement found numerous places in the OT. Hays turns to a familiar passage in Isaiah 40 verse 8 to make the point: “The grass withers, the flowers fall, but the word of our God endures forever.”

Christian interpreters lulled by the familiarity with Matthew’s Gospel may not fully appreciate the theological boldness of the christological assertions made at every turn by Matthew. But there can be no doubt that the word spoken by Jesus in Matthew 24:35 can be true only if it really is “the word of our God,” only if the speaker who says “my words will not pass away” is in fact the God of Israel, God with us. (p. 169-170) 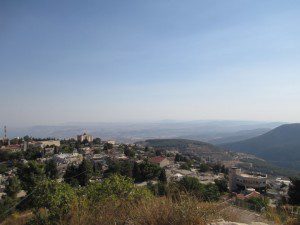 I am with you always. This brief survey brings us to the end of Matthew’s gospel 28:16-20 where we have the definitive statement that Jesus himself will be with them always. This enduring presence is a clear theme in the Old Testament. Hays runs through a few examples: It is God who stands with Jacob (Gen 28) and with Jeremiah (Jer. 1:5). It is God who is with the people to rebuild the temple (Hag. 1:13, 2:4) The promise to be with them always is an embodiment of the divine role.

Jesus – who even before his birth was identified by Matthew the Evangelist as Emmanuel, God with us – now speaks after his resurrection in fulfillment of precisely that identity. He possesses all authority in heaven and earth, and he promises his sustaining presence throughout all time and in all places, as he sends his followers out to obey him. There is only One who can speak such things truthfully. (p. 174)

To Hays Matthew’s intent is clear. All of these examples illustrate Jesus as an embodiment of Israel’s God, but none more clearly than the worship offered by his followers in 14:33, 28:9, and 28:17.

Matthew highlights the worship of Jesus for one reason: he believes and proclaims that Jesus is the embodied presence of God and that to worship Jesus is to worship YHWH – not merely an agent or a facsimile or an intermediary. If we read the story within the hermeneutical matrix of Israel’s Scripture, we can draw no other conclusion. (p. 175)

Hays makes a strong case that Matthew clearly and intentionally proclaims a high view of Jesus as the incarnate presence of God with his people. The idea that Matthew has a low Christology, with Jesus as a prophet and teacher, is hard to defend.

What do you think of Hays’ argument?

Is Matthew proclaiming Jesus as the embodiment of Israel’s God?