Adam According to Jesus (RJS) 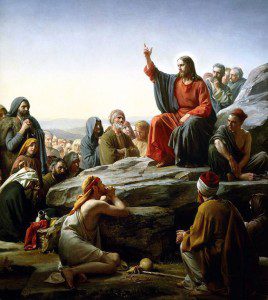 This is sentiment I have heard repeatedly in the discussion of Adam, Eve, science and Christian faith. It seems clear (some will claim) that Jesus regarded Adam and Eve as historical figures. He taught that Adam and Eve were historical figures. But is this actually what the available evidence in the Gospels demonstrates? What follows is an edited repost examining the topic.

Jesus is the Center. Jesus is the center of our faith. We need a hermeneutic that reads scripture through the lens of Jesus Christ and through his incarnation, life, death, resurrection, ascension, and future hope. We believe in the bible because we believe in God, not vice versa. Yes, it is something of a spiral not cleanly separated. We know God and of his mission largely through revelation in scripture, but not solely through scripture. The emphasis of primacy is important though. God (and Jesus) first and foremost.

Jesus alludes to Adam and Eve only indirectly. In the major reference found in the gospels Jesus takes Genesis 1:27 (So God created mankind … male and female he created them) and the institution of marriage in Genesis 2:24 (That is why a man leaves his father and mother and is united to his wife, and they become one flesh) and then describes divorce as a concession to the hardness of the “your hearts”.

Dr. C. John (Jack) Collins has written a book Did Adam and Eve Really Exist?: Who They Were and Why You Should Care that makes an argument for the historicity of Adam and Eve in some real sense. When he considers the evidence in the gospels (pp. 76-78) Collins also points out that the major allusion to Adam and Eve is really a statement about marriage. He takes this one step further, though, and suggests that the fact that the law in Deuteronomy 24:1-4 allows divorce is because something changed after the beginning when God instituted marriage. This leads him to Genesis 3: “The obvious candidate for making that change – indeed the only one – is the sin of Adam and Eve, with its consequences for all human beings.” (p. 77) Thus, it appears that Collins’s main reason for thinking that Mt 19 and Mk 10 point to the historicity of Adam and Eve is because he reads in this passage a reference to the Fall.

I don’t find this a persuasive argument because one need not believe in a historical Adam and Eve to realize that humankind is fallen. The events that Moses deals with during the Exodus, including the many sins of the people, are never referenced back to Adam and some primeval fall. In fact, the story of Genesis 3 plays little if any role in the entire Old Testament.

The other possible references to Adam and Eve in the gospels are slim indeed. Collins notes that Jesus makes a passing reference to Abel (Mt 23:35 and Lk 11:51) – but “since this is just in passing we need not make much of it.” There is also, perhaps, a passing reference to the serpent and Genesis 3 in John 8:44: “You belong to your father, the devil, … He was a murderer from the beginning, not holding to the truth, for there is no truth in him.” Collins thinks that the phrase “murderer from the beginning” is an allusion to the serpent in Genesis 3.

This is the extent of the evidence we have concerning Adam and Eve from recorded words of Jesus. (The genealogy in Luke 3 goes back to Adam, but this is not part of Jesus’s teaching.)

John Walton, The Lost World of Adam and Eve, doesn’t find the references in the Gospels worth spending any time on. We need to deal with passages in Paul’s writings (especially Romans 5 and 1 Cor. 15) and speeches (Acts 17), but the only reference he finds important in the Gospels is the reference to Adam in Luke’s genealogy. The genealogy here and in Genesis 5 and 1 Chronicles suggests to John that we should consider Adam as a historical individual, although not necessarily as the progenitor of the entire human race.

Jesus may, or may not, have “believed they were historical.” I don’t think this is a question we can answer based on the text of the exchanges recorded in the Gospels. Jesus knew and used the teachings of the Old Testament text including Genesis as an accurate view of God’s work in the world. Whether he had “unnecessary” knowledge as the incarnate son is not clear, he was clearly limited in some ways.

Jack Collins believes that “it is fair to say that the Gospel writers portray Jesus as one who believed both that Adam and Eve were historical and that their disobedience changed things for us” (p. 78). I take a somewhat different view and think that the Gospel writers portray Jesus as a biblically literate 1st century Jewish male who was steeped in the scripture and the culture – he was localized in a time and place. More than this, he knew his audience and was reaching out to them with his message of the coming Kingdom of God. Although we learn much from his words and ponder the message, he was speaking to a different audience in a different context. What Jesus thought about the historicity of Adam and Eve can’t be discerned, and our opinion of this rests in part on what we take as the consequences of incarnation.

Non-historical characters can be used to teach true lessons. This should go without saying, but there is no necessary reason why Adam and Eve (or Abel) must be historical to make the lessons taught by Jesus true. The stories of the Good Samaritan and of Lazarus and the rich man teach true lessons whether the characters are historical or not. With respect to Genesis 1-4, we should consider the options. If Jesus, as the incarnate son, knew a truth his audience didn’t know, what would he have done? Would he have avoided the allusion on that account? Would he have added a caveat that would have made no sense to his audience? It is quite likely that he would have used the context of his audience to make the point he wished to make. It was, after all, a lesson about the institution of marriage that comes clearly from the text of Genesis. In other words, it isn’t possible to tell from these allusions and references alone what Jesus thought of Adam and Eve.

So what about Adam and Eve? The question of Adam and Eve is a theological question and a hermeneutical question. It isn’t really a scientific question. Nor can it be decided by submission to the allusions of Jesus recorded in the gospels. The most significant theological questions are raised by Romans 5 and 1 Cor. 15. Paul we need to reckon with, and I look forward to working through Scot’s contribution to Adam and the Genome after finishing Dennis’s.

There are also ways to understand the sweep of scripture and the fallen nature of mankind without reference to a historical Adam and Eve. These do not necessarily diminish the inspiration and authority of scripture as witness to the work of God in the world.

It is also possible to view Adam and Eve as historical without being unique progenitors of the entire human race. John Walton has suggested that Adam and Eve are called as priests serving in sacred space much as Abraham is later called as the father of Israel. There are many clues to this sort of reading in the text of Genesis 1-4.

This shouldn’t be a make or break issue. Rather, it is an issue where we need to spend more time and thought.

March 23, 2017
Are Christians in the USA Persecuted?
Next Post

March 24, 2017 Is Mission an Enigma?
Recent Comments
36 Comments | Leave a Comment
"This is a really weak take on DBH's arguments. I dont understand the impulse critique ..."
zech Reviewing David Bentley Hart
"So because 1-9 genesis referes to penis and then vagina. Therefore we can deduce that ..."
Jostein Syvertsen Yarhouse And Gender Dysphoria
"In some of the TTTE episodes pride goes before a fall crops up and that's ..."
Erica L Thomas the Tank Engine (Deconstructed)
"TTTE helped me learn to distinguish feelings, something I had trouble with as a kid. ..."
Erica L Thomas the Tank Engine (Deconstructed)
Browse Our Archives
get the latest from
Evangelical
Sign up for our newsletter
POPULAR AT PATHEOS Evangelical
1