Why Do Christians Speak of “Mission”?

Why Do Christians Speak of “Mission”? April 7, 2017 Scot McKnight 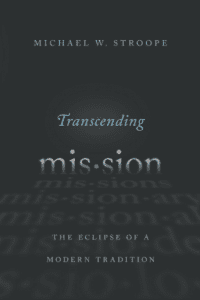 Michael Stroope has a full scale analysis of the Christian usage of the term “mission” and terms associated with it, like “missionary” and now today the very happy, fuzzy term “missional.”

His study is called Transcending Mission.

He contests the value of mission language. He seeks to deconstruct its usefulness for framing the what the Bible is about and what the Bible’s calling for Christians/churches is.

(1) to figure out why the Bible has so little use of the language of mission, and never does “mission” occur,  and then,

(2) to examine where we picked up this term “mission.”

(3) His third point? Get rid of mission language and reframe our calling with kingdom language.

He contends the term enters the Christian vocabulary through pilgrimage traditions that soon become colonialism and imperialism and territorial conquests. He locates some of it in the Jesuits and esp in the 1910 Edinburgh Mission Conference.

Instead of mission language, Stroope proposes “kingdom” language. Ah, kingdom, but what does kingdom mean? (That’s what I’m asking as I’m reading him. I have my Kingdom Conspiracy in mind of course.)

Mission is contested language that requires continual promotion, defense, and revision, as this vocabulary is supplied language to the Christian tradition. When mission ascends to the status of sacred language, it can eclipse the kingdom and thus limit our view of Gods reign and muddle our ability to participate in his kingdom. The language of the reign of God, on the other hand, expresses an abiding theme throughout the Bible that culminates in the message of Jesus. When discovered and embraced, God’s reign forms us into pilgrim witnesses, who, though weak and afflicted, are liberated to live alongside and love those we encounter along the way. 358

He contends “kingdom” reorients us to be witnesses and pilgrims of the kingdom. His view of kingdom is largely that of GE Ladd with some NT Wright.

As language enters vocabulary, integrates with thought, and becomes the content of communication, it changes the way one sees God, it shapes identity, and it determines actions. Kingdom language prompts those who follow Christ to live as pilgrims who give witness to the coming reign of God. They are not called missionaries, and their life purpose is not named as mission. To supplant the structures of thought expressed in Scripture with the language of a modern tradition is to underestimate the power of God’s kingdom to change the world through witnesses and pilgrims. 376

Kingdom language is the better choice of language, because it is rooted in revelation, includes all types of believers, prioritizes formation of life, expands possibilities, underscores the place of the church, liberates from Christendom assumptions, and points to the Spirit’s work. 376

What of the church?

Kingdom language recognizes the place of the community of faith in the activity of God. Some view the church as the problem or an impediment, so they advocate a “kingdom orientation” rather than a “church orientation,” as if we must choose between the two. For sure, the church is not the kingdom of God, but the church, as the body of Christ, exists in the world to speak and embody kingdom values. As a community of people being transformed into the likeness of Christ, the church is able to witness to Christ’s teaching, life, and death. By the very fact that people surrender personal desires and their agenda to live alongside others, they offer a counterwitness to the pervasive individualism of modern life.

The themes of my Kingdom Conspiracy are God/Jesus as king, the king’s rule by way of redemption and governing, the people of Israel and the church who are the redeemed/governed people, the king’s instructions/law and the king’s location and sacred space. The above paragraph could have been expanded to see even more vitality to the relationship of kingdom and church and actually support most of what he is saying.

As for replacing “mission” with “kingdom”? I’m for far more stringent and rigorous biblical theology, which Stroope is doing. He’s right on the history of the term “mission” being something that has taken over, though some of what is meant by “mission” surely is involved in “kingdom” so that I’m not sure I’d make as big a difference. However, he’s right when speaks to the framing issue: which term we use matters immensely, and kingdom is the term to use.

April 6, 2017
Podcast on Calendar and Holy Week
Next Post

April 7, 2017 Theolo-Story
Recent Comments
4 Comments | Leave a Comment
"Amen."
Eileen Almighty and Everlasting God
"This is John OrtbergNo, This is John Ortberg, emphasis mine"Once Ortberg was convinced the volunteer ..."
swbarnes2 This is John Ortberg
"Hey I realize this is an old post, but can you tell me the name ..."
Malissa Weekly Meanderings, 4 January 2020
"Christaine and others,In theory what you espouse sounds nice, sweet, loving, incredible, worth celebrating! In ..."
David Russell The Gospel of With Us and ..."
Browse Our Archives
get the latest from
Evangelical
Sign up for our newsletter
POPULAR AT PATHEOS Evangelical
1