A Whale of a Story (RJS)

No this one isn’t about Jonah. Rather it is about the fossil evidence and other evidence for the evolution of whales. Dennis Venema digs into this example in Adam and the Genome. Robert Asher has a chapter on whale evolution in his book Evolution of Belief. (Robert Asher is a paleontologist at Cambridge, specializing in the paleontology of mammals.) Gary Fugle also discusses whale evolution in his excellent book Laying Down Arms to Heal the Creation-Evolution Divide. As it happens some of my colleagues have been deeply involved in the study of whale evolution and we have several examples on display across the street.

Even Charles Darwin knew that whales were mammals. This led him to propose in his first edition of On the Origin of Species that they evolved from land animals – perhaps from something like an aquatic bear. This proposal earned him a great deal of ridicule (Dennis quotes a rather acerbic example) and Darwin reduced his discussion of whale evolution in subsequent editions. While the identification of whales as mammals was once a poster child for anti-evolution forces, it has become one of the strongest examples of evolution available with a multitude of transitional fossils, most of them discovered in the last forty years. The whale also captures our imagination. Massive sea-faring mammals.

Darwin picked the wrong land animal, rather than a bear he should have chosen a pig, or a hippopotamus. Whales and porpoises (cetaceans) are even-toed ungulates like both of these mammals. The evidence for evolution of whales from an early even-toed ungulate comes in multiple threads.

(1) The fossil record. A string of intermediate forms have been identified (image above is a Basilosaurus fossil). Many of these fossils retain clear evidence of hind limbs gradually disappearing through the millions of generations. If you click on the image above you can see the hind limbs in the lower right corner. These are rudimentary, perhaps of use in reproduction, but certainly not for locomotion. The ankle bones of these ancient whale precursors have a structure similar to that of even-toed hoofed animals and one distinctive from other mammals. 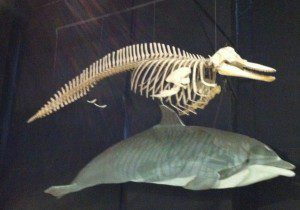 The whale fin has the same external hydrodynamic structure as fish but the bone structure found in vertebrates, especially mammals with a humerus, ulna, radius, carpals.  The whale fin if functionally similar to, but structurally distinct from the fin of a fish.

The fossil record shows a progression of whales with  nostrils at various locations along the snout. Dennis notes that “The nostrils in Protocetids, are not at the tip of the snout but are shifted back along the skull, and the hind-limb skeleton appears insufficient to bear the full weight of these mammals. Scientists believe these species behaved in a way analogous to modern sea lions: hunting and feeding in the oceans, but hauling themselves out to rest, mate, and bear young.” (p. 17) 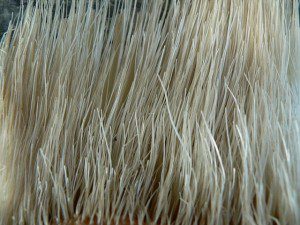 Robert Asher highlights a less commonly mentioned element of whale evolution; the divergence of toothed and baleen whales. The oldest whales were toothed like their land dwelling ancestors. The Basilosaurus above had some pretty impressive teeth. The baleen whales (filter feeders like the blue whale and the humpback) diverged from this line, likely beginning some forty million years ago or so. Paleontologists have identified a series of fossils exhibiting the development of the baleen and the loss of teeth as well as the gradual development of other features observed in baleen whales.

The features characteristic of today’s baleen whales did not appear fully formed all at once. Many fossil species exhibit a mixture of features. Some early ancestors had both teeth and what appears to be the beginning of baleen.  There is substantial evidence that whales with a combination of baleen and teeth existed for some ten million years alongside both toothed and baleen whales before going extinct.

The fossil record contains many “transitional” forms, with more no doubt remaining to be discovered. There isn’t a complete linear path from tetrapod to whale, but given the nature of fossilization as a rare event, the number we do have is impressive.

(2) Embryology.  The embryos of many whales develop hind limb buds that are reabsorbed, as well as external ear lobes, also reabsorbed. But there is more:

Modern cetaceans have two nostrils on the fronts of their face as embryos, like all mammals do. Over the course of development, the nostrils migrate from this starting location at the top of the head to form a blowhole, with the process complete before birth. And strikingly, modern cetaceans are true tetrapods for a short period as embryos. Cetacean embryos develop forelimbs and hind limbs at the same stage that all mammals do, but later the hind limbs stop developing and regress back into the body wall. Studies have shown that the basic biological machinery for making hind limbs is properly activated in young cetacean embryos, but that a second set of instructions later causes the process to stop and regress. (p. 17-18)

Robert Asher likewise discusses the significant embryological evidence. Concerning the development of baleen, he notes modern baleen whales begin the process of tooth formation prior to birth. “Teeth” in a minke whale never fully form or break the gums, but they do at least begin to develop and their rudiments can be seen in fetal specimens.” (Asher p. 137)  Figure 7.4 in his book illustrates the presence of rudimentary teeth in a fetus.

The modifications that result in different species often arise from changes in the signals an embryo receives in development and the timing of these signals. Here is one pathway for the accumulation of modest changes over time.

(3) Genetics. The genome project confirms the connections between whales and other mammals. Whale and dolphin DNA is most similar to the hippopotamus, then cow, sheep, deer and giraffes. All consistent with evolution from an even-toed hoofed precursor. Coming back to baleen, Robert Asher cites a study of three major genes important for the formation of enameled teeth.

DMP I (dentin matrix acidic phosphoprotein), AMBN (ameloblastin) and ENAM (enamelin). DMP I is known to contribute to the development of not only dentine but also other tissues such as bone and cartilage. The AMBN and ENAM proteins appear to express most strongly in the process of enamel formation in developing teeth. (Asher p. 137)

All three genes (DMP I, AMBN, ENAM) are present in baleen whales, but the two enamel-specific ones, AMBN and ENAM, have lost their enamel-producing function. Unlike the sequences in toothed whales (dolphin), even-toed ungulates (hippo, cow, pig, camel), and other mammals (human, mouse, rat, dog), their samples of these genes in modern baleen whales exhibited what are called frameshift mutations. That is, the basic sequences of AMBN and ENAM are present, but are missing critical elements that keep them from finishing what they do in other mammals, namely, synthesize proteins relevant to the formation of tooth enamel. Interestingly, such mutations were not present in the third protein [probably a typo – should be gene], DMP I, which is demonstrably involved in processes besides tooth formation, such as bone and cartilage development. (Asher p. 138)

These genetic remnants are entirely consistent with evolution.

Certainly the leap from land animal like Indohyus or Pakicetid requires many concurrent and complementary changes. From feet to fins, nostrils to blow holes, and more. No such change could be made in one large step. The offspring would die. Each difference we see today required a number of modest intermediate changes. Every child resembled its parents. Grandparent, parent, child were all the same species. But over time the changes accumulate and new species appears. The whale is not the same species as its Pakicetid precursor just as Anglo Saxon is not the same as modern English. But as with the evolution of language, the evolution of species is imperceptible from the ground, the perspective of time is required.

April 13, 2017
The Benedict Option: Our Culture's Problem
Next Post

April 13, 2017 Easter Podcast
Recent Comments
1 Comment | Leave a Comment
""
Queenofthefuzzybugs The (Non)Wesleyan (Non)Quadrilateral
""
Xanthrince JesusCreed.org Blog Prayer
""
William Ristau Writing In Your Life
"'This renewal began first with the renewal of the people of God (chapter 5 or ..."
Kostya2 Putting the Bible Together
Browse Our Archives
Related posts from Jesus Creed