The Benedict Option: A Sweep of History 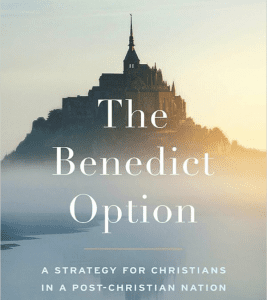 Rod Dreher thinks our contemporary culture is pock marked by fragmentation and unbelief and a degeneration of morality into the triumph of eros. In the 2d chapter of The Benedict Option he sketches big themes in the last six hundred years and how we got to where we are.

His big themes reminded me of the kind of sweep of Western history I read in Francis Schaeffer and Hans Rookmaaker on the death of culture. In other words, big sweeping observations about entire centuries. Historians will want more nuance, but certain trends do gain steam and that is what Dreher is on about.

A recent piece in The Economist compares Dreher’s Benedict Option to Roger Scruton’s three lectures in his brilliant book On Human Nature. The comparison is one of “flight” vs. “fight.” Flight is inappropriate for Dreher’s strategic withdrawal to form a different kind of fight, a different kind of activism, a different approach to cultural formation. Scruton’s church-state relation is Erastian while Dreher’s is Benedictine; the former sees the church as preserving the Anglican tradition while Dreher is far more church-centered.

What are the trends that both Scruton and Dreher are responding to? Here’s Dreher’s take:

First, in the 14th Century we encounter  the “defeat of metaphysical realism by nominalism in medieval theological debates removed the linchpin linking the transcendent and the material worlds. In nominalism, the meaning of objects and actions in the material world depends entirely on what man assigns it. War and plague brought the medieval system crashing down.” A world that was unified with God at the center and high and above all was fractured from God’s creation. Here comes modernity.

Second, in the 15th Century we encounter the Renaissance which “dawned with a new, optimistic outlook on human potential and began shifting the West’s vision and social imagination from God to man, whom it saw as ‘the measure of all things’.”

Third, in the 16th century the “Reformation broke the religious unity of Europe. In Protestant lands, it birthed an unresolvable crisis in religious authority, which over the coming centuries would cause unending schisms.” Dreher’s flat out biased about the Reformation’s so called crisis of authority for it had every bit the mechanism of authority that Catholics had with magisterial authority residing not in the Pope but in folks like Luther and Calvin and their confessional definitions. What he says about the Reformation is true about low church evangelicalism today but it is not true of the Reformation.

Fourth, what about the 17th century? “The Wars of Religion resulted in the further discrediting of religion and the founding of the modern nation-state. The Scientific Revolution struck the final blow to the organic medieval model of the cosmos, replacing it with a vision of the universe as a machine. The mind-body split proclaimed by Descartes applied this to the body. Man became alienated from the natural world.”

Fifth we turn to the 18th century, and what happens here? “The Enlightenment attempted to create a philosophical framework for living in and governing society absent religious reference. Reason would be the polestar of public life, with religion—considered a burden from the Dark Ages—relegated to private life. The French and American revolutions broke with the old regimes and their hierarchies and inaugurated a democratic, egalitarian age.” Autonomy comes much more into play.

Sixth, the 19th century created “the success of the Industrial Revolution,” which “pulverized the agrarian way of life, uprooted masses from rural areas, and brought them into the cities. Relations among people came to be defined by money. The Romantic movement rebelled against this alienation in the name of individualism and passion. Atheism and Marxist-influenced progressive social reform spread among cultural elites.” Expressivism is now on the loose in a new way.

We turn finally to the 20th century, and here we encounter “the horrors of the two world wars severely damaged faith in the gods of reason and progress and in the God of Christianity. With the growth of technology and mass consumer society, people began to pay more attention to themselves and to fulfilling their individual desires. The Sexual Revolution exalted the desiring individual as the center of the emerging social order, deposing an enfeebled Christianity as the Ostrogoths deposed the hapless last emperor of the Western Roman Empire in the fifth century.” Here he speaks of Freud and also of the diagnosis of Philip Rieff and the Psychological Man. I’d say many today have become the Sociological Person.

The end of modernity is the individual finding meaning in no one other than the self.

Our next post will look at how he finds a Christian response in The Rule of St. Benedict. I think this is one of his most interesting chapters.

April 17, 2017
Is It Possible To Think For Ourselves AND Pursue Spiritual Community?
Next Post