In a recent article in The National Review, Rachel Lu predictably contends for more presence and activism by Christians, and the author does so in some version of a Niebuhrian or Kuyperian or Catholic or Methodist activism. Rachel Lu, in a thoroughly civil review unlike at least one other review, says this of Rod Dreher’s Benedict Option:

Rod Dreher’s The Benedict Option has been particularly influential, igniting controversy with the suggestion that “the culture war as we knew it is over” and that Christians should focus their energies on building families and smaller communities that are self-consciously countercultural. That book was complemented in interesting ways by Anthony Esolen’s apocalyptic Out of the Ashes and Archbishop Charles Chaput’s less extreme but still bracing Strangers in a Strange Land, which offers advice on “living the Catholic faith in a post-Christian world.”In concert, these books have thrown Christians into a debate about the wisdom of radical withdrawal as a means of coping with cultural loss. Should Christians stay engaged in political and cultural battles? Or is it better to accept our losses and focus on the higher things?

The Benedict Option was controversial in large part because religious conservatives are already very attracted to quietist modes of thought. Quietism, a posture of spiritual detachment, has appeared in various forms throughout Christian history and culture. It gains force when a culture is in decline or elites become overtly hostile to Christianity. Withdrawal holds appeal, not only because the world is hard but also because Christians believe themselves to be the inheritors of a rich tradition that promises something better. To Christian faithful, life is first and foremost a quest for eternal redemption. If the mainstream culture seems uncongenial to that journey, there will always be some who judge it best to give up the fight for the world and to focus instead on forging a less perilous path for themselves and their loved ones.

Throughout Christian history, many believers have withdrawn from the world for such reasons. But quietist movements are also a familiar part of American tradition; our nation’s history is peppered with self-segregated faith communities. Some denominations, like the Anabaptists and Hutterites, explicitly prescribe a more segregated lifestyle. Other communities identify with a larger denomination but collectively commit to a prescribed countercultural lifestyle. Americans are a people with a robust religious foundation, a strong commitment to freedom, and relatively shallow cultural roots. Experimenting with faith in community seems natural to us.

Quietism and alarmism are the two prevailing winds against Dreher’s Benedict Option. To compare Dreher’s proposals to the “Anabaptists” (which group, Rachel?) and “Hutterites” (that’s very specific) is mistaken in important ways because unlike the Hutterites, Dreher’s supposed quietism is not as withdrawn or as insular as them. Nor is he a Quaker. 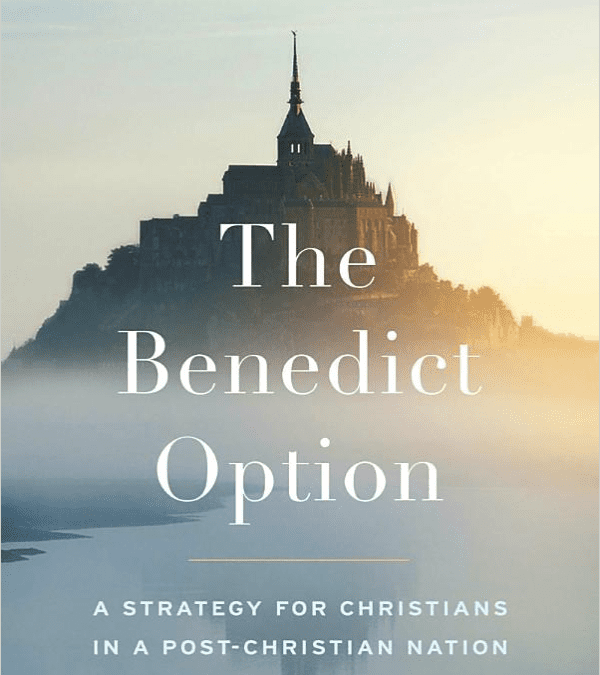 Instead of using terms like quietism let’s look at what Dreher actually says about his Benedict Option. Noticeably, he uses the Rule of Benedict and adjusts it by generalizing some principles for ordinary folks to use as they seek to make their way in post-Christian America. Here are Dreher’s proposals:

We are adrift in liquid modernity, with no direction home.

The forces of dissolution from popular culture are too great for individuals or families to resist on their own. We need to embed ourselves in stable communities of faith.

But that’s not necessarily quietism unless it means total withdrawal, monastery like or Hutterite like. What Dreher means by strategic withdrawal is exiting the culture war, regrouping by becoming more Christian, and turning churches into agents of Christian sanctification. Many of us have said the culture war is either over or not worth fighting for. Even James Davison Hunter leaned in that direction in his widely read To Change the World. Hunter’s proposals struck many of us with anabaptist leanings as quite anabaptist as he urged a kind of “faithful presence,” the title of my colleague, David Fitch’s book: Faithful Presence.

So what are the principles one can use from the Rule of Benedict according to Dreher? It begins with the cultural problem Dreher believes is upon us, or close enough to be upon us, or lurking the shadows. His rhetoric on the problems we face strike many as alarmist but his common jeremiads against our day are not held him by him alone. If he trades in hyperbole it serves a purpose to call attention to genuine problems for Christian living in post-Christian America. Here’s the cultural problem:

The Rule is for monastics, obviously, but its teachings are plain enough to be adapted by lay Christians for their own use. It provides a guide to serious and sustained Christian living in a fashion that reorders us interiorly, bringing together what is scattered within our own hearts and orienting it to prayer.

Nor are we trying to save the West. We are only trying to build a Christian way of life that stands as an island of sanctity and stability amid the high tide of liquid modernity. We are not looking to create heaven on earth-; we are simply looking for a way to be strong in faith through a time of great testing.

When I heard of this book and when I opened it I expected to read about Ave Maria University in Ave Maria FL, a community Kris and I wandered around one day. Not a word. Nor does it seem to me Dreher sees Ave Maria as what he’s on about. From my reading he imagines Christians remaining where they are but forming tighter fellowship with other like-minded Christians in their community. Unlike the Essenes of Qumran they are like the Pharisees of Galilee. (I know many see the word “Pharisee” and think “negative.” Forgive me, but I don’t. The Pharisees remained where they were and lived in their community according to their own rule of life, the Torah interpreted.)

His principles, which are an example of (mostly) Catholic virtue ethics, are these:

First, Order. If a defining characteristic of the modern world is disorder, then the most fundamental act of resistance is to establish order. If we don’t have internal order, we will be controlled by our human passions and by the powerful outside forces who are in greater control of directing liquid modernity’s deep currents.

This means the discovery of the order, the logos, that God has written into the nature of Creation and seeking to live in harmony with it. … To order the world rightly as Christians requires regarding all things as pointing to Christ. … In other words, ordering one’s actions is really about training one’s heart to love and to desire the right things, the things that are real, without having to think about it. It is acquiring virtue as a habit.

Second, Prayer. The 1960s media theorist Marshall McLuhan, a practicing Christian, once said that everyone he knew who lost his faith began by ceasing to pray. 60

Third, Work. This is how we must approach our jobs: as opportunities to glorify God. More deeply, Benedictines view their work as an expression of love and stewardship of the community and as a way of reordering the natural world in harmon with God’s will. For the Christian, work has sacramental value. 61

Fourth, Asceticism. I he closure of certain professions to faithful orthodox Christians will be difficult to accept. … . And many of us are not prepared to suffer deprivation for our faith. 63 Asceticism is an antidote to the poison of self-centeredness common in our culture, which teaches us that satisfying our own desires is the key to the good life. 63

Fifth, Stability. The Bible shows us that God calls some people to pick up and move to achieve His purposes, Father Benedict acknowledged. “Still, in a culture like ours, where everyone is always on the move, the Benedictine calling to stay put no matter what can call forth new and important ways of serving God.” 66

Sixth, Community. The rootlessness of contemporary life has frayed community bonds. It is common now to find people who don’t know their neighbors and don’t really want to. To be part of a community is to share in its life. That inevitably makes demands on the individual that limits his freedom. 67 To be a Christian, and to be a vowed member of a religious community, incurs certain obligations to others. … Life in Christian community, whether in monastic or ordinary congregations, is about building the kind of fellowship that every one of us needs to complete our individual pilgrimage. 70

Seventh, Hospitality. According to the Rule, we must never turn away someone who needs our love. A church or other Benedict Option community must be open to the world, to share the bounty of God’s love with those who lack it. 72

Eighth, Balance. Balance, then—or put another way, prudence, mercy, and good judgment — is key to governing the life of a Christian community. 74

Here is virtue ethics: “By methodically and practically ordering our bodies, souls, and minds to a harmonious life centered on the Christ who is everywhere present and filling all things, the Benedictine way offers a spirituality accessible to anyone.” 75

And here is the big theme of this book as I read it: “The way of Saint Benedict is not an escape from the real world but a way to see that world and dwell in it as it truly is. Benedictine spirituality teaches us to bear with the world in love and to transform it as the Holy Spirit transforms us” (77).

April 17, 2017
Master of Arts in New Testament at Northern
Next Post