The Bush of Hominins (RJS) 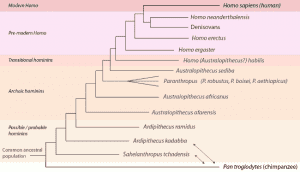 The bush of hominins … a rather cryptic title for this post.

The term hominin refers to modern humans and groups affiliated with our immediate ancestors. In the figure this is certainly everything from Australopithecus up, and possibly everything from Ardipithecus up. Hominids (formerly used with roughly this meaning) is now taken to include modern and extinct great apes. (See here for a discussion of the terms.)

Although it is common to talk of a tree of life and to imagine images like the ubiquitous ascent of man, this is a faulty image. There is no nice straight line from ancient apes to modern humans, at least not one clearly defined in the fossil evidence. Rather we should consider a bush with multiple branches arising from ancient ancestors. Although we can trace a general pattern in the fossil record, it is difficult to say that any given fossil is a member of the pre-human or archaic human population out of which modern humans evolved.

The second half of chapter three in the new book Adam and the Genome by Dennis Venema and Scot McKnight looks at the fossil and genetic evidence for human evolution. The image above, from his post at BioLogos (here) is reproduced in the book. (Apparently the new “improved” (ha!) Patheos no longer allows you to click for a larger version, but there is a readable version on the BioLogos site.) There are two important points in this section.

(1) There is abundant fossil evidence of  possible and probable ancient hominins, of archaic hominins, transitional hominins, pre-modern Homo species and modern Homo sapiens. Although only modern humans remain from this population, many of the species coexisted at different times. 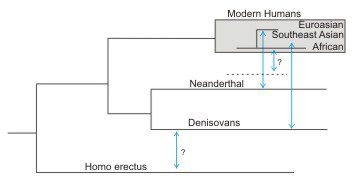 (2) It has been possible to sequence the genome of a few of these species including including Neanderthals and Denisovans. The analysis of genetic evidence suggests that modern humans interbred with Neanderthals to some extent and all but sub-Saharan African populations retain evidence of this interbreeding in the human genome. Humans also interbred with Denisovans in Southeast Asia and populations from Southeast Asia and Oceania retain evidence of this interbreeding. Sub-Saharan African populations may contain evidence of interbreeding with other extinct human species.  Given the revolution in the ability to extract and sequence the genome of ancient specimens, we may uncover additional connections in the future.

The evolutionary development of distinct and separate species is a process along a continuum. Perhaps we should consider Neanderthals and Denisovans as subspecies rather than distinct species. A debate on this issue continues. However we look at it though, the bush of evolution is complex with different twists and turns. Interbreeding among closely related species is a significant complication for any simple understanding of the “moment” when “hominin” became “human.”

Dennis Venema reflects on this:

One of the frustrating things about science is that while it is well suited to answer certain questions (and even better at raising questions in the first place), it is not suited to answer others. It’s very common, for example, for Christians, when they come to understand this evidence, to wonder where Adam fits in. I sometimes think of this as “pin the Adam on the phylogeny,” alluding to the children’s game. The main point of such an allusion is that the child is blindfolded, and so are we in this case, so to speak. Science can tell us a few things – we descended from a population rather than a pair; our ancestors likely passed through these sorts of forms; and so on – but it is simply unable to weigh in on the historicity of Adam and Eve as individuals. What we can conclude, however, is that if they were in fact historical, they were not the sole parents of all humanity but part of a larger population. Beyond this, science cannot say. (p. 59)

The evidence for interbreeding between modern humans and other closely related hominin species in an inhomogeneous fashion (i,e, different “races” have different mixtures from the occasional interbreeding) makes this effort to pin the “Adam on the phylogeny” even more troubling. Does this mean that different races contain differing corruptions of “the image of God”? Lord keep us from this kind of thinking. The history is terrifying (try David N. Livingstone’s excellent book Adam’s Ancestors for a taste).

We are all human, one interbreeding population created in the image of God, all in equal measure. I look forward to Scot’s contribution to the book when we will dig deeper into the question of Adam. This is an important question and “simple” answers won’t move us forward.

What are your first impressions from the evidence for hominin evolution?

Is the evidence for interbreeding a problem?

May 4, 2017 A Court of Restorative Justice
Recent Comments
3 Comments | Leave a Comment
"This article starts a series on what A Course in Miracles (ACIM) implies when acim ..."
burakdeniz The Miracles of Creation? (RJS)
"It is your confidence in these thoughts that needs pardoning and what causes absolution a ..."
burakdeniz The Miracles of Creation? (RJS)
"Scot, 1 Cor 16:15-18 asks the Corinthians to submit to the leadership of Stephanas and ..."
Richard Fellows Finishing Well With Clement
"I can only guess that they look at Trump as a kind of god like ..."
D.M.S. The Gospel of With Us and ..."
Browse Our Archives
get the latest from
Evangelical
Sign up for our newsletter
POPULAR AT PATHEOS Evangelical
1