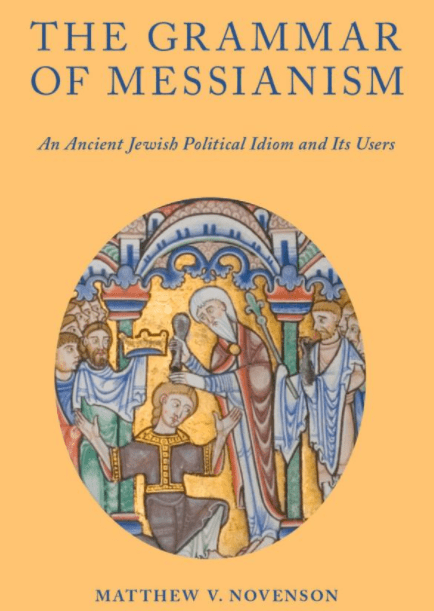 Years ago a Beginning Greek student of mine bumped into me in the hallway. I asked him how Greek Exegesis I was going and he said this: “After studying beginning Greek and working hard on the Greek verb luo I expected to find the verb on every page of the Greek New Testament. It hardly ever occurs. Why did we focus on a verb that is rare in the NT for learning Greek?” The answer was because it was simple and stable. But it struck me as odd that he would expect the paradigm verb to be chosen because of its frequency in the NT.

Something analogous may be said of the term “Messiah.” If you listen to some Christians talk about the Old Testament and Judaism you might have a similar experience. When I was in college a professor told us that every Jew got up every morning and looked down the road — like the prodigal’s father — for the Messiah coming down the road. He also told us that 1 Enoch was the 1st Century’s Late Great Planet Earth (Hal Lindsey).

Then I read the Old Testament. Later I read the Jewish psedudepigrapha and apocrypha and Dead Sea Scrolls and rabbinic sources. What I learned was that Messiah was not nearly as present as I was led to expect.

Enter Matthew Novenson, author of two books, the second building a wider foundation for the first: Christ among the Messiahs and his new book The Grammar of Messianism. In many ways, Novenson’s books are examples of scholarly literary criticism or even deconstruction (in a light sense): he takes apart scholarship on the Messiah. His books are academic and designed for the guild of scholars, but they are readable for the persistent reader. I want here to summarize his major ideas, focusing on The Grammar of Messianism.

Before I do this: if I were a PhD supervisor, I would assign this book to each student for two reasons: it is a model of academic standard and it probes a topic that is worthy of much discussion: messiah.

First, there is a tradition in the Christian faith, in the Jewish faith, and among scholars in both religions, that thinks there was a “messianic idea” at work in the world.

The messianic idea is a firmly established trope in biblical studies and Jewish studies from the mid nineteenth century to the present. The particulars vary from one writer to the next, but the common core is the notion that ancient messiah texts belong in an extraordinary way to Geistesgeschichte or Ideengeschichte, the history of ideas. On this model, the pertinent texts in Daniel, or the Psalms of Solomon, or the Parables of Enoch, or the Talmud Bavli are so many instantiations of a single suprahistorical idea that exists independently of them all. This idea itself is not just—as the word messiah might suggest—an anointed ruler, but rather a uniquely and characteristically Jewish hope for a Utopian future (5-6).

He then cites a number of scholars (Graetz, Klausner, Scholem, Charlesworth, Fitzmyer). He cites a number who think more particularly about specific texts (Collins, Stuckenbruck, Gager). Many today think the term has very little meaning, while Novenson would say it means “messiah,” as in a messiah figure, but that it is not drawing upon a large messianic idea complex of ideas.

Yes, there are many who embrace the messianic idea, though I doubt very much many of them want to use Hegelian terms to describe it, and the weakness of this section is he does not provide the evidence such scholars use to construct their belief in a pervasive messianic idea. “Messianic idea,” his foil, needs a careful analysis of how and why the category arose. In Christ among the Messiahs, chps 1-2, have more than we find in The Grammar of Messianism, but a full display of the evidence gathered onto a page or two would at least give the best impression of the messianic idea scholarship.

I jump ahead to my overall review of this book upon finishing it: after reading all the texts that bring up “messiah” in the Jewish world I have a hard time not believing that the evidence suggests not only a widespread — it is found in many places — use of the term as an honorific or designation for a significant figure but at least a general idea of messiah lingering in the air. When someone used the term “messiah” in the 1st Century, folks knew what it meant. It would be salutary for all the messianic texts Novenson affirms to be listed … splintering them into various chapter topics may give the impression they are not as widespread as the more common view believes. One need not jump to the theory that Messiah was a fixed lexicon entry and pervasive to think the term was common and evocative.

Third, the term “messiah” is an archaic term drawn from Scripture to express a social reality and a social vision for a particular author in a particular context. Thus, the term is about the use of Scripture. Thus, “in antiquity the messiah was not an article of faith but a manner of speaking” (21). That’s a false dichotomy. If the term did what Novenson says it did, it was also an article of faith.

Fourth, he dissects the use of the term in specific contexts apart from larger ideas or redeemer figures in general. This, too, is a strong methodological point but in the end one wants to have comparisons as well — we want to know how messiah in those contexts connects to other such figures — royal, redemptive, etc — in that world.

Fifth, he shows that one academic trend, connected to Sigmund Mowinckel, is that in the OT there is no genuine Messiah figure but only anointed persons and things (connected to temple, for instance) but in Judaism there was, and Novenson is keen to show that the anointed persons of the OT and the anointed persons of Judaism are of the same cloth: anointed figures. The term in the Psalms was like “Caesar” and was an honorific for the anointed king and institution. He takes the so-called vacuum hypothesis — the messiah hope disappeared — to pieces in chp. 4 (turning especially toward Joachim Becker). How so? The only reason people find a vacuum is because they believe in a pervasive messianic idea; if there was no messianic idea running around there was no vacuum. Quoting Morton Smith: “just as there messiahs without Ends, so there are Ends without messiahs” (123).

Sixth, messiahs were both born — that is, Davidic — and made — that is, not Davidic but worthy of being called Messiah. This very notion chases away the messianic idea that included a necessity for Messiah being a Davidic descendant. There are persons designated messiah who were not Davidic.

Seventh, he contends the old distinction of Jewish messiah vs. Christian messiah is overdrawn and mistaken. That is, political, outward, public, national, corporate, natural and earthly vs. spiritual, inward, private, universal, individual, supernatural, and heavenly (192). He contends there is “no difference” (196).

Messiah language is, for the most part, a regional-ethnic subset of ancient Mediterranean political discourse. It is a species of that genus. It is a particularly Jewish and Christian way of talking about a basic social problem—determining who is and who should be in charge—about which Persians, Greeks, Romans, and others had their own ways of talking (272).

There is no messianic idea in the old Idealist sense, but there is messiah haggadah, a mass of legend spun from scriptural source material by ancient Jewish and Christian authors in their various historical contexts (275).

May 17, 2017
Changing the Conversation on the Tech Wise Family
Next Post

May 18, 2017 And the Sea Will Be No More? (RJS)
Recent Comments
0 | Leave a Comment
"Hey I realize this is an old post, but can you tell me the name ..."
Malissa Weekly Meanderings, 4 January 2020
"Christaine and others,In theory what you espouse sounds nice, sweet, loving, incredible, worth celebrating! In ..."
David Russell The Gospel of With Us and ..."
"In the Incarnation, Our Lord assumed our whole humanity so that He might heal it. ..."
Christiane Smith The Gospel of With Us and ..."
"If you don't mind me chiming in,a good portion of it is human error/cause and ..."
Jonathan Alon What to Say When Someone says ..."
Browse Our Archives
Follow Us!