What Would You Choose? (RJS)

Since 1982 the Gallup Poll has been asking Americans about their views on evolution and human origins. This week they released the results of their most recent survey conducted in early May of this year (here). The question posed (with the order of options randomized):

Which of the following statements comes closest to your views on the origin and development of human beings:

The answers have changed modestly over the last 35 years, with the most significant change an increase in the percentage of those who are comfortable with no guidance at all. This has increased from 9 to 19% over the years, with a concomitant decrease in those  who see God involved in the process in one way or another. The plot to the right summarizes the data reported by Gallup. I’ve added error bars at the +/- 4% level reported for the current poll as this helps to clarify the reliability of the results.

The latest poll is noteworthy in that it marks the first time that ‘creation in their present form within the last 10000 years’ was not the clear favorite and the first time this response dropped below 40%. Whether this is a blip (similar to the dip in 2010) or represents a trend remains to be seen. It is encouraging, however, that the drop in the young creation view is countered by an increase in those comfortable with God guiding development over millions of years rather than an increase in the ‘no guidance’ position. 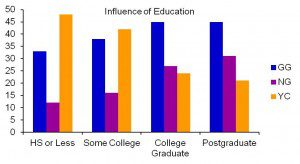 The Gallup report analyzes these results according to religious views, church attendance, and education level. There are no real surprises here – those who attend church regularly are far more likely to agree choose the young creation view (65% of weekly attenders). The results also correlate strongly with education. The difference between the respondents with and without a college degree is striking. Postgraduate education has a smaller influence.

Is a change afoot? An enormous number of book have been published over the last decade wrestling with the questions of evolution and Christian faith. I’ve reviewed or commented on several dozen books on this blog, with more on the way (I am not sure of the exact number I’ve read and reviewed – I stopped counting and returned to writing this post when I passed 36 on the shelves in my study). I am currently working through Adam and the Genome, Evolution and the Fall, Science and Christianity, and The Emergence of Personhood, three of which focus on the questions raised by human evolution.

Most of the books that have been, and are being, published work through the theological and biblical questions raised by evolution. This is significant. As a church we are digging into the important questions. These book are being published (often by relatively conservative Christian publishers) and are being read. At the recent BioLogos conference, one author noted that publishers who shied away from his work a decade ago as “too controversial” are approaching him about the possibility of publishing his next book.

Although resistance remains, I have found far more willingness to listen and understand than was common a decade ago. Dennis Venema recently made a similar observation on a post at BioLogos: A Decade of Evolutionary Creation: Milestones and Signposts.

Evolutionary creation is a viable option for understanding and making sense of God’s world.

Do you think there is an increased openness to evolutionary creation?

If so, what is driving this change? 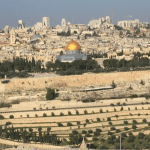 May 25, 2017 Rompers on Stage?
Recent Comments
9 Comments | Leave a Comment
"This article starts a series on what A Course in Miracles (ACIM) implies when acim ..."
burakdeniz The Miracles of Creation? (RJS)
"It is your confidence in these thoughts that needs pardoning and what causes absolution a ..."
burakdeniz The Miracles of Creation? (RJS)
"Scot, 1 Cor 16:15-18 asks the Corinthians to submit to the leadership of Stephanas and ..."
Richard Fellows Finishing Well With Clement
"I can only guess that they look at Trump as a kind of god like ..."
D.M.S. The Gospel of With Us and ..."
Browse Our Archives
get the latest from
Evangelical
Sign up for our newsletter
POPULAR AT PATHEOS Evangelical
1