The Bible is Central 10 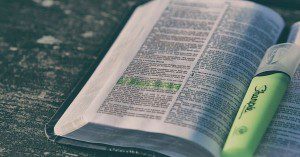 Because it is the Lord who established him, the Lord can give him understanding to learn the mitzvot, commandments. The connection is important: What the Lord makes is made for a purpose.

The Lord has fashioned us to to know and do his will. This is what we were made to do. Humans are at their best when doing what they were designed to do.

Unfortunately, this word “fear” (Hebrew yare) can connote cringing fear — the way a small animal might be terrified by a cruel human or a more mighty beast — but the word intends to connote not a cringing fear but a delightful fear — the kind of fear one feels before the kind of God who is overwhelmingly majestic and simultaneously gracious and kind and compassionate and who has established us to love him and to love others.

No one who reads the Psalter can fail to observe how frequently the psalmists are opposed. Here he refers to the insolent, the seethingly rebellious, and he knows they are the opposite of those who “fear” God. Notice 119:78:

”Let the arrogant be put to shame,
because they have subverted me with guile;
as for me, I will meditate on your precepts.”
What can we learn from the psalmist?

First, that naming the arrogant and rebellious is not without merit. While I’m not keen on overuse of labels, and I’m concerned that some use such labels far too often, and that sometimes we label in order to “other” rather than to love … still, there is an important place of discernment here. We have to see arrogance, seething rebellion, for what it is: arrogance against God.

Second, describing what the arrogant have done is valuable. The psalmist says they have subverted me with guile. We don’t always know the motives of others; sometimes we can discern them.

Third — for some the “first” thing — the psalmist prays that the insolent will be “shamed” — that is, defrocked from their position and from their arrogant stand. This is the language of the Magnificat and the Lukan form of the Beatitudes and James’ own hope for the “rich”.

Fourth, instead of dwelling on the naming and shaming of the insolent, the psalmist puts that behind him to move into “meditating on the precepts of God.” He will meditate — turn over and over.

June 14, 2017 Practicing Privilege in the Local Church
Recent Comments
0 | Leave a Comment
Browse Our Archives
get the latest from
Evangelical
Sign up for our newsletter
POPULAR AT PATHEOS Evangelical
1