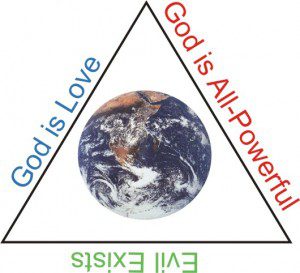 When ever we begin to think about God’s creation the question of evil rears its ugly head. If God is love and the all powerful creator, why is there evil in the world. Some pretend they’ve answered this question by reference back to the Fall: the blame lies with mankind. Just read Genesis 3. But this doesn’t really suffice. After all, if God is love and the all-powerful Creator, why does his good creation contain the capacity for evil and rebellion?  However real the Fall is, it can’t answer the most significant questions.

The next chapter in Creation: The Apple of God’s Eye by Justo González considers the question of evil. In this chapter González explores a number of views, but offers no pat answers. In orthodox Christian theology no edge of the triangle can be denied. To a certain extent we must consider it a mystery. Part of the answer must include free will. González looks at Augustine’s “solution” to the problem.

According to Augustine, a central characteristic of free will is that it is its own cause. Certainly, outside factors, experiences, needs, perceptions, and so on do influence our decisions. But whatever in a decision is determined by outside influences is not truly ours. Decisions are ours only inasmuch as they are generated by the will itself. Thus, one may well say that part of the image of God in us is that our will, like God’s, is ultimately self-generated. No matter how much prompted by outside forces, in the final analysis it is not generated by such forces. This is precisely the reason we call it “free.” (p. 54-55)

Augustine’s solution, and especially the subsequent emphasis on the Fall perverting the will of humankind, is not entirely satisfactory. Even a cosmic fall, before Adam and Eve, doesn’t do away with the problems. When the Fall is invoked as a solution to the problem of evil, the biblical narrative becomes a tale framed by “no longer.”  The initial good creation is “no longer” good.  Restoration becomes the driving theme. In the age to come creation will be restored to its intended good state.

Not Yet. González looks at another perspective, also found in the ancient church fathers. This is the perspective of “not yet.”

There is, however, another metaphor that also appeared early in Christian history. While the metaphor of the fall sees evil in terms of “no longer,” this other metaphor sees it in terms of “not yet.” Within this metaphor, evil is not to be seen mostly as a fall from primeval perfection, but rather as the present situation of a creation that is still moving to its completion. … There are also hints of this in the passage from Romans … where Paul speaks of a creation “groaning in travail,” as in the pangs of childbirth. For a woman in travail, her pains are not a matter of “no longer,” but rather of “not yet.” (p. 59) 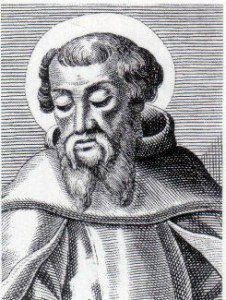 Irenaeus of Lyon provides one example of this approach in the early church. While there are some elements of “no longer” in the biblical narrative, such as “no longer” walking with God, “not yet” is a more pervasive overarching theme.

Note, for instance, that the story that begins in a garden in Genesis leads to a city in Revelation. Both the garden and the city are the work of God: the former at the very beginning of creation, and the latter at the end, when the Holy City descends from heaven. Thus, the process leading from a garden to a city – from simple nature to civilization – is not in itself evil. Humans were always intended to till the land, to grow in their understanding of the world, to use this understanding of the created world to “subdue it” and to organize social life. Evil is manifested in that this process is not straightforward but is convoluted, twisted, full of tragedy and destruction. But it is still growth – and God intends growth. (p. 61)

Evil has permeated our being and our societies. González suggests that evil can attack us in many ways. Of course there is the active commission of evil acts of one sort or another, but this isn’t the only manifestation. “Evil has so permeated our minds and our wills that its mysterious nature is often used as an excuse not to face and oppose it.” (p. 62)  The people of God, at their best, have looked forward to a better day and have worked to present a foretaste of that better day in the present. Care for the sick and powerless is one important example.  The great commandment is clear – we are called to love God and love others.

This book is designed for use in small groups or other discipleship settings. There are some through provoking questions at the end of each chapter. Among the questions in this chapter:

How are we to live with the reality of evil?

How can we help people find hope?

June 27, 2017 Seminary Education: Accessible, Affordable
Recent Comments
3 Comments | Leave a Comment
Browse Our Archives
get the latest from
Evangelical
Sign up for our newsletter
POPULAR AT PATHEOS Evangelical
1