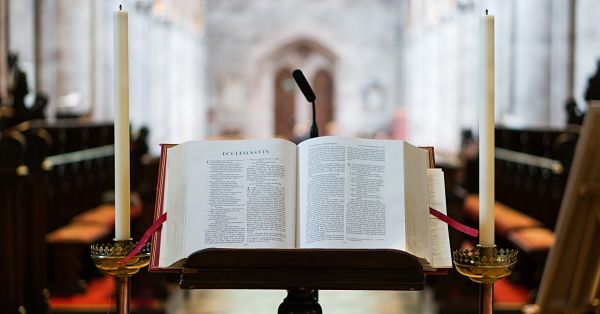 A plank of the new perspective on Paul — but only “a” plank and not the major weight-bearing plank — was that the Reformers got Paul wrong. Stephen Chester’s new book, Reading Paul with the Reformers, forces New Perspective scholars to stand on another plank while he cuts in at least half the plank of false interpretations of the Reformers. As I said in the previous post, some “fake news” stereotypes were used.

Chester — toward the end of this post — proposes a three-fold criteria for the best readings of the Bible.

Chester begins with Luther and Erasmus and more importantly uses them for the hermeneutical dichotomy they created: Should we do “theological interpretation” (Luther) or historical critical work (Erasmus), and is the Bible clear in all it says (Luther) but difficult at times (Erasmus), and does the ambiguity of Scripture create problems (Erasmus) or is it a false approach (Luther)? Perhaps that picture of Ecclesiastes will be a good symbol for this post.

The presence of such obscurities in Scripture reveals the necessity in interpretation for the authority and tradition of the church. Erasmus acknowledges that Luther is formally correct to insist on the principle of sola scriptura. The authority of the Bible is greater than that of all human decisions, by whomever they are made. But for Erasmus, “the debate here is not about Scripture itself… the quarrel is over its meaning .” 25

It will not do to invoke the Holy Spirit against tradition …  Rather, the Spirit should be identified with the consensus of tradition, and this identification makes incredible Luther’s claim that the church has erred in its basic teaching about salvation.

Luther digs in his heels: the Bible is clear for its redeemed readers. To say it is not clear threatens God’s communication skills!

In response, Luther denies Erasmus’s premise that the meaning of Scripture is not always plain. … There are things in God that are unclear and meant to lie beyond the ability of human intellect to grasp, but Scripture communicates that of God which God has chosen to reveal. “If Scripture is obscure or ambiguous, what point was there in God’s giving it to us?”26

Erasmus thinks Luther’s talking about his own interpretations and that means Luther, well…

For Erasmus, Luther possesses a dangerous will to interpretative power and wants “to be the lord, not the steward, of Holy Scripture.” 27

What they were fighting about is a fight that has not ended.  Notice the theme of accommodation.

Erasmus and Luther thus present a fascinating comparison in their approaches to the nature of Scripture and its interpretation. Both regard Scripture as an act of divine accommodation to human language, both emphasize that Scripture mediates Christ, and both believe that under the guidance of the Spirit the church ultimately will not err in interpretation. Yet their convictions about how this accommodation and mediation takes place, and how the Spirit guides the church, offer striking contrasts. 30

This is classic Luther: the Bible is clear, it is to be preached and announced.

For the Scriptures to be obscure would defeat their purpose. The truths of Scripture are to be openly proclaimed and when difficulties in interpretation arise, they result from human sinfulness or from limited knowledge of the biblical languages. Close attention to grammar and normal linguistic usage provides guidance concerning the intentions of the Spirit. This does not displace the role of the church in interpretation, for the true church will interpret truly. Scripture is clear and if the visible church, especially the Papacy, errs in interpretation, this indicates that it is not the true church. 30

Chester knows that both of these scholars dip their understanding of Scripture in ecclesiology.

Both men, despite radically different definitions of the church, ultimately locate that authority and validity in the church as the church is guided by the Holy Spirit. In this sense, they are both ecclesial interpreters. 31

That ecclesial interpretation, however, has been displaced by many today. Many think the major approach is history, and that means finding out what happened behind the Bible and beyond the Bible rather than just what the Bible says or, better yet, what the Spirit is saying through the Bible. The historical method is no more unifying — and is truly much worse at unifying Bible readers.

It is widely perceived that the attempt of the last two centuries or more to replace the authority of the church in interpretation with impartial historical inquiry—conducted largely by means of the heroic efforts of individual scholars—has failed. 31

For, although both Erasmus and Luther extensively discuss Paul as the author of those biblical texts most often relevant to their debates, they do not reconstruct Paul’s theology. Their concern is not to understand Paul as such, but to understand what the Holy Spirit has said through Paul in his texts. They focus on the disclosure of Jesus Christ by these texts as part of the wider unified witness of Scripture. 33

The main event is thus not Paul’s important thoughts as such, but rather what the Holy Spirit has said through Paul. The goal of theological interpretation of Scripture is to explicate that speaking of the Spirit. 34

My point is not that the project is wrong but that, even if achievable, its results can never be an authoritative guide to interpretation for the church. For in the church, authority lies with the Spirit-inspired texts in their disclosure of Christ, not with a reconstruction of the theology argued to have underlain those texts. Theological interpretation and historical interpretation each has its own validity, and the same scholar may with complete legitimacy engage in both at different times, but they are different from each other in their goals and should not be pursued as if those goals are the same. 37

That historical method is not adequate, but it is necessary and important and becomes dialectical with theological interpretation:

For all these reasons, there is no justification for doing anything other than subjecting theological readings of Paul’s texts to the most rigorous and critical historical examination. 41

But this leads into Erasmus, not Luther: there is plurality and diversity in interpretation.

However, we should also recognize that precisely because of their historical nature as ancient texts our knowledge of which is limited, it may be possible to provide several different accounts of what the Spirit is saying to us through Paul’s texts that have more or less equal claims to historical plausibility. It is precisely this that accounts for our inability to reach a conclusion as to the center of Paul’s theology. 43

The conflict of interpretations is thus best addressed by a mixed hermeneutic. The goal of hearing the Spirit speak through Paul in his texts is served by applying the triple criteria of

John MacArthur ought to read this book.

August 3, 2017 Is There Evidence for Design in Biology? (RJS)
Recent Comments
4 Comments | Leave a Comment
Browse Our Archives
get the latest from
Evangelical
Sign up for our newsletter
POPULAR AT PATHEOS Evangelical
1