The Rise of the Complementarian Hypothesis of the Trinity 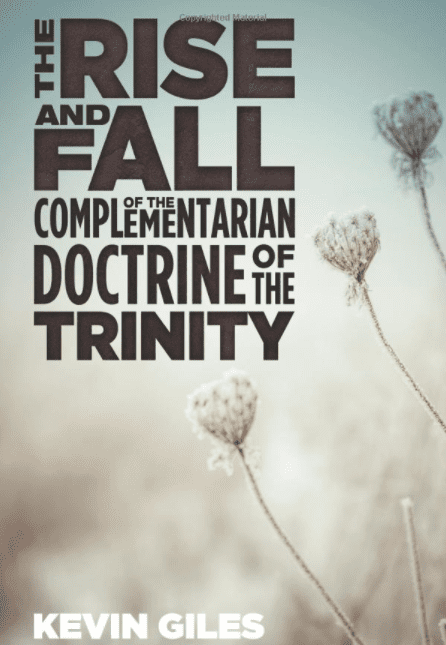 Some who embraced the eternal subordination of the Son were political about it: they let others (Grudem, Ware, Burke, Strachan) do the talking, they did the supporting by non-criticism and providing the platform. But because they never wrote about it are not now accountable, but they nonetheless were part of the complementarian (mis)hypothesis of the Trinity.

This is how that theory arose, and I am working in this series with Kevin Giles, The Rise and Fall of the Complementarian Doctrine of the Trinity.

It began with George Knight III:

All new directions in theology are articulated first in a point of time, usually by one person, in most cases a man. The very first person in history to speak of “the role subordination” of women, and of “the eternal role subordination of the Son of God,” in both cases meaning in plain English their subordination in authority and nothing else, was George Knight III in his highly influential 1977 book, New Testament Teaching on the Role Relationship of Men and Women. In this book, he rejected the historic way of speaking of men as “superior,” women “inferior” that had reigned until the middle part of the twentieth century, arguing instead that men and women are “equal,” yet “role differentiated.” These differing “roles,” he said, were given in creation before the fall. As such, they give the God-given ideal and are transcultural and transtemporal. This wording sounded acceptable to the modern ear: who could deny that men and women are different in significant ways and tend to have different roles—women bear and nurture children, do most of the house-work; men do the gardening, cook at BarB-Qs, at least in Australia, and watch sport on TV? (9)

Much of it rooted in 1 Cor 11:3. (See now Lucy Peppiatt, Women and Worship at Corinth.) Giles continues by pointing the significance of Knight’s book:

This one man produced a way of speaking of the male-female relationship that preserved what he called the “traditional” understanding of male “headship” that sounded acceptable to modern ears and in doing so reworded and redefined the doctrine of the Trinity in the terms he had invented to speak of what he believed was the primary difference between the  sexes (10).

Knight’s view was not according to the Athanasian Creed, the Belgic Confesion of 1561, and the Second Helvetic Confession of 1566 and hardly anyone noticed. If they did, they were silent.

Knight also defined “role” in such a way that was a “person-defining category, speaking of fixed power relations, not role relations that may change from place to place and from time to time” (11). God the Father has the role of authority and the Son and women have the role of submission. In spite of clever analogies, Giles contends Knight’s better analogies would be to apartheid where role is connected to essences. This has to do with God: “What is actually being argued is that what primarily differentiates the Father and the Son is differing authority: who rules over whom for all eternity” (11). It was a circular argument that Knight got himself into:

There was a healthy debate after Knight but it all but ended with the Danvers Statement, which affirmed Knight’s view, and then the Recovering Biblical Manhood and Womanhood statements where “role” was now fixed, where complementarian replaced hierarchical and traditional, and where the Trinity argument was much less in play than it would come to be.

With the publication of Wayne Grudem’s Systematic Theology: An Introduction to Biblical Doctrine in 1994, the Trinity argument for the first time became integral to the complementarian position. He gives a full chapter to the doctrine of the Trinity in which he argues in detail for the eternal subordination of the Son. He makes this the ultimate basis for the permanent subordination of women. And he gives a full chapter to the relationship of the sexes, which is basically an exposition of his case for “male headship.” In this chapter, he argues that the hierarchical ordering of the sexes on earth is predicated on the hierarchical ordering of the divine three persons in eternity. He is emphatic that what he is teaching on these matters is what the Bible teaches and what the church has always believed (14).

In these pages he breaks with historic orthodoxy. For him, what primarily distinguishes and differentiates the three divine persons, especially the Father and the Son, is differing authority. He says, the Father uniquely has “the role of commanding, directing, and sending,” and the Son has the role of “obeying, going as the Father sends, and revealing God to us.” Later, when speaking of how the Trinity prescribes the male-female relationships, he says, “The Father has greater authority. He has a leadership role among all the members of the Trinity that the Son and the Spirit do not have.”… The outcome of this teaching is that we end up with a doctrine of the Trinity where the divine three persons are hierarchically ordered; the Father eternally rules over the Son, and this is the basis for the hierarchical ordering of the sexes (15).

The stubborn insistence of Drs Ware and Grudem to force a parallel between the Father and the Son, to a husband and a wife is worse than troubling. And we can see from the passage cited above, it leads to the inevitable comparison of the Holy Spirit to the child of the divine husband (Father) and wife (Son). These parallels have far more in common with pagan mythology than Biblical Theology…. This is a distortion of the Godhead and there is nothing helpful or beautiful about it (16-17).

But, Grudem’s theology continues to sell:

The impact of Grudem’s Systematic Theology on evangelical and Reformed Christians—particularly young, mostly male, theological students—cannot be overestimated. It is the most widely used theology text in evangelical and Reformed seminaries and Bible Colleges around the world. More than 500,000 copies have been sold and the book has been translated into eight languages and eight other translations are in progress. He is emphatic that the eternal subordination of the Son in authority stands right at the heart of the orthodox doctrine of the Trinity. More than anyone else he has led the majority of evangelical and Reformed Christians to accept as orthodoxy an Arian-like hierarchical doctrine of the Trinity, where the Son is eternally subordinated to the Father (17).

Grudem has claimed his view is historic orthodoxy; it is not and those he cites are often mis-cited (read p. 18 in Giles).

Next comes Bruce Ware, and we end today with Giles’ sketch of Ware.

In [Ware’s highly recommended book] Father, Son and Holy Spirit, time and time again Dr Ware speaks of the “supremacy” of the Father and often of his “priority” and “pre-eminence” in the Godhead. For him, the divine persons are not “co-equal” as orthodoxy with one voice asserts. They are “hierarchically” ordered. Thus we are not surprised that he argues that the Father and the Son differ in glory. He says, the Father has “the ultimate and supreme glory”; “the ultimate supremacy and highest glory,” and “the highest honor.” For this reason, the Son must give “ultimate and highest glory to his Father.” In asserting this he contradicts Scripture, which says the Father and the Son are alike to be glorified (1 Cor 2:8; Gal 1:3-5; Eph 1:3-5; Heb 1:3; Rev 5:12-13; 7:9-12, etc), and the Nicene Creed, which says the divine three persons “together’ [are to be] “worshipped and glorified,” and the Evangelical Theological Society s doctrinal statement, which demands that it members believe that the Father, Son, and Spirit are “equal in power and glory” (20).

Thus he says, “the authority-submission structure [within the life of God] marks the very nature of the eternal Being of the one who is three.” 20

More than Grudem does, Ware gets very ontological about this subordinationism of the Son.

Giles has a brief sketch of Robert Letham. Giles thinks Letham in inconsistent — having a good Trinity theology but slipping in complementarianism in sex roles in alignment with Grudem.

Then Giles goes through the dominance of the complementarian hypothesis of the Trinity in Bruce Ware and John Starke, One God in Three Persons; then Rodrick Durst, Reordering the Trinity; then Malcolm Yarnell, God the Trinity and Michael Ovey, Your Will Be Done.

So confident was this movement that ETS for 2016 was organized to talk about the Trinity, but little did they know their Rise was to be their Fall.