Gravity All Around (RJS)

The awe of science … and a pastor’s take on the Big Story. 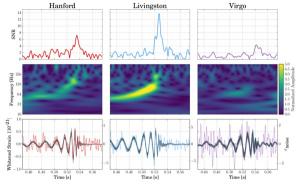 Two years ago, after a major upgrade LIGO, the Laser Interferometer Gravitational-Wave Observatory, came back online and immediately detected gravity waves emanating from the collapse of of two black holes into one more than a billion years ago. Two interferometers with arms 2.5 miles long, one in Louisiana and the other in Washington State saw the clear signature 7 milliseconds apart. This was the culmination of decades of hard work … and the beginning of a new era of astronomical observatories. I know some of the people involved in this project and heard a talk about it just last week.

Since the first observation there have been at least three more events observed, the latest in August of this year, August 14 at 10:30:43 UTC. The LA Times story on the observation is here. This latest observation involved three observatories as the VIRGO observatory in Italy was operational along with the two LIGO observatories. The signal was observed in Louisiana, 8 milliseconds later in Washington and 6 milliseconds after that in Europe. Comparison of the latest signals allows a much more precise evaluation of the event – the collapse of two black holes 1.8 billion light years away. The LIGO website contains a wealth of information as well as some of the images used here. (Image Credit: LIGO/Caltech/MIT/LSC) 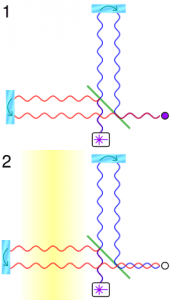 Gravitational waves are ripples in the fabric of space-time caused by events like the collapse of two black holes or two neutron stars merging into one. These waves travel at the speed of light and can be detected by the minute effect they have on the relative lengths of two arms of an interferometer. This image is reproduced from Wikipedia (here). A coherent laser beam is split into two and travels down the arms of the interferometer. They meet at the detector giving a baseline signal. When a gravity wave passes through the interferometer (illustrated in yellow) it will have a different gravitational influence on the length of the two arms. This causes the light to be out-of-phase at the detector and gives rise to a signal different from baseline. The arms are exquisitely balanced (a triumph of science and engineering) capable of detecting changes of one part in 10000000000000000000000 (i.e. 1022). Local events can perturb the detector, but a spurious signal would require local events of the right type separated in time by 7 milliseconds (i.e. 0.007 seconds). The signals reported today, like those from two years ago are well above the noise level, text-book signatures of the merger of two black holes. 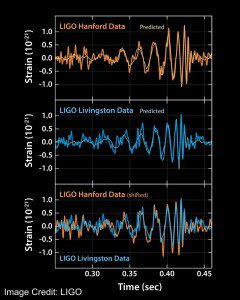 Being a scientist, the data interests me more. The chart to the right is available on the LIGO website representing the first observation in 2015. This is a beautiful signal. Although the team (1000 scientists) spent several months double checking everything and simulating the data, there is no need to tease anything out of the data to see that something significant had happened. The predicted signal is for the merger of two black holes, 36 and 29 times the mass of our sun, forming a black hole 62 times the suns mass, releasing energy in a gravitational wave with a characteristic frequency and chirp.The simulations report that the event occurred 1.3 billion years ago and provide some information as to where in space it occurred. The new observation (chart at the top of the post) is equally clear and resulted from the merger of black holes of 30.5 and 25.3 solar masses, 1.8 billion years ago with even more detailed information as to where in space it occurred..

These are exciting observations. The polarization information provided by the combination of three observatories with different orientations adds to the wealth of information and further confirms Einstein’s theory of general relativity. Perhaps the gravitational-wave observatories of the future will shed light on the great mysteries of the cosmos (like dark matter).

Where does this leave us as Christians?

The heavens declare the glory of God;
the skies proclaim the work of his hands.

Often times we as Christians wonder what to make of the mind-blowing discoveries of science.Where does our understanding of time and space, chemistry, geology, and evolutionary biology leave us when it comes to God as creator? At the BioLogos conference on Evolution and Christian Faith pastor, Rev. Leonard vander Zee gave a presentation telling the grand story of creation from the perspective of modern science. I enjoyed his presentation and the opportunity to talk with him at the meeting. A version of his presentation is available as an 11 minute video.

So, what if we told that grand biblical narrative with the scientific knowledge of the origins of the universe that the ancients did not have? And what if we were to tell it in the poetic and imaginative style of Genesis 1, Job 38, Psalm 104, or Proverbs 8. What would it be like? Let’s call it The Big Story.
…
It was all hot gases for a half million or so years until, by the force of gravity, God built within it. The stars began to form, and, they grew in mass, and developed their own thermonuclear reactors, creating carbon and iron.

We live in this story.

Jesus Christ is the true and human image of the invisible God. By faith in Christ, through his shed blood and victorious resurrection, we are being restored by the Spirit to our true human identity as image-bearers of God. As Paul puts it, “We are being transformed into his image with ever increasing glory” (2 Cor. 3:18).

Then one day we fallen broken creatures will shine with the glory of our full humanity in the presence of Christ, our brother. Then, as God intended all along, we will join, with a restored creation, in that eternal dance of Trinitarian love and delight, and all things will be made new.

That is the big, billions of years long story, from stardust to a new creation. That is the story in which, out of which, and toward which we live. It is the true story of the whole world that makes sense of who we are and where we are going. It is the really good news that gives salvation and hope to all who live in its light.

Take a look at the video and marvel in the wonder of the heavens and the majesty of the Big Story. Gravitational waves add to our wonder, and to our understanding. But it is God’s creation in which we live and thrive.

Do scientific discoveries increase your wonder at God’s creation?

What is your response to Len vander Zee’s telling of the Big Story?

(This is an updated version of an older post – with the new data added.)