In The Beginning: Eyewitnesses Talking Jesus 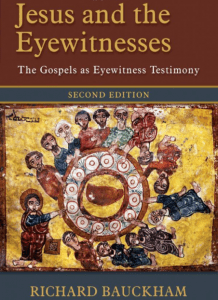 It is Richard Bauckham’s intent to dismantle a major element of classical (German-rooted) form criticism. In particular, this feature: the sayings and deeds of Jesus were incorporated into an oral tradition at an early date but then were passed on by anonymous Tradents (passers on of traditions) who adjusted the forms to fit into early church needs and who adjusted the sayings and deeds to fit into the forms themselves. In other words, there was no inspection, no guarantee that the sayings or deeds were reliably passed on.

Any student of the Gospels; any student of Jesus (historical Jesus studies); any apologist — each of these needs to read this book carefully. And absorb it. Agree or disagree, but know it first.

Bauckham’s theory is that there were eyewitnesses and that what the earliest writers wanted most was not a reliable tradition but eyewitness testimony. This is all worked out extensively in his book Jesus and the Eyewitnesses: The Gospels as Eyewitness Testimony.

Gospel students know the significance of Papias in this discussion, and I remember now during my early years as a professor reading Josef Kürzinger’s extensive monograph on Papias, a monograph so far as I know has never been translated from German into English. Bauckham translates the famous words of Eusebius citing Papias:

I shall not hesitate also to put into properly ordered form for you [singular] everything I learned carefully in the past from the elders and noted down well, for the truth of which I vouch. For unlike most people I did not enjoy those who have a great deal to say, but those who teach the truth. Nor did I enjoy those who recall someone else’s commandments, but those who remember the commandments given by the Lord to the faith and proceeding from the truth itself. And if by chance anyone who had been in attendance on (parekolouthekostis) the elders should come my way, I inquired about the words of the elders — [that is,] what [according to the elders] Andrew or Peter said (eipen), or Philip, or Thomas or James, or John or Matthew or any other of the Lord’s disciples, and whatever Aristion and the elder John, the Lord’s disciples, were saying (legousin). For I did not think that information from books would profit me as much as information from a living and surviving voice (Eusebius, Hist. Eccl. 3-39-3-4). [The change of tense indicates Papias’ own context: he had access to what Aristion and the Elder John were saying but not to the apostles.]

Who was Papias? Bishop of Hierapolis (not far from Laodicea and Colosse) at the end of the 1st Century and beginning of 2d. The big issue is that he was in touch with eyewitnesses as Hierapolis was a major cross road:

Papias belonged, roughly speaking, to the third Christian generation, and therefore to a generation that had been in touch with the first Christian generation, the generation of the apostles. He was personally acquainted with the daughters of Philip the evangelist, the Philip who was one of the Seven (though later writers assimilated him with the Philip who was one of the Twelve). This Philip spent the last years of his life in Hierapolis, and two of his daughters, who were well known as prophets (Acts 21:8-9), also lived out the rest of their lives there, unmarried. Perhaps Papias knew Philip himself in his childhood, but it was from Philip’s daughters that he learned some stories about the apostles (Eusebius, Hist. Eccl. 3.39.9).

Papias is alive and ministering when Matthew, Luke and John were coming into publication and their reputation:

This makes this particular passage from Papias very precious evidence of the way in which Gospel traditions were understood to be related to the eyewitnesses at the very time when three of our canonical Gospels were being written.

Some observations, then, of Papias famous saying quoted above:

First, his statement is modest and not a self-serving claim of authority:

There is no reason at all to regard Papias’s claims in this passage as apologetic exaggeration, for they are strikingly modest. To traditions from members of the Twelve he claims at best to have had access only at second hand, while, as we have seen, he probably did not even claim to have heard Aristion and John the Elder himself but only to have received their teaching, during their lifetimes, from those who did hear them. We may therefore trust the most significant implication of what Papias says: that oral traditions of the words and deeds of Jesus were attached to specific named eyewitnesses.

Second, Papias prefers eyewitness to researching written sources, and what he means by “living and surviving voice” is not oral tradition as understood by some in form criticism.

Papias’s denial that “information from books would profit me as much as information from a living and surviving voice” has been often remarked and much misunderstood. Many have taken it to mean that he preferred oral tradition in general to books in general. Such a prejudice against books and in favor of the spoken word would make the fact that Papias recorded in writing the Gospel traditions he collected, as well as the fact that he himself later wrote a book that bore some relationship to these traditions, paradoxical to say the least. We also know that by the time he was writing his own book Papias knew written Gospels, at least those of Mark and Matthew, and, even though he seems conscious of some deficiencies in these two Gospels, by no means disparages them.

Third, Bauckham convincingly demonstrates (with others) that “living voice” refers to eyewitnesses and to oral history and not to anonymous oral traditions passed on and on and on. The expression “living voice” then refers to finding and discussing with and relying upon eyewitnesses. This, he shows, was the favorable method of historians in that time. This conclusion by Bauckham challenges much of what has been said about how the Gospel sayings and deeds were passed on, and it makes me rethink my own ways of discussing the Gospels and the apostolic gospel traditions. As this book moves on I will want to see if he gives enough space for source criticism, or the use of written sources by the Gospel writers.

Against a historiographic background, what Papias thinks preferable to books is not oral tradition as such but access, while they are still alive, to those who were direct participants in the historical events — in this case “disciples of the Lord.”

Fourth, Papias is at the threshold of the dying off of the eyewitnesses. He did not know the apostles (“disciples”) but he heard from the “elders” via those who heard the elders. But he does know Aristion and the Elder John, so he can vouch for what is being said about Jesus, though it is not clear that he heard those two himself. But he heard from those who had heard their voices.

The presence, then, of eyewitnesses is both a guarantee of the reliability of sayings and deeds of Jesus and a preservative force of those who were saying things or writing things about Jesus. The eyewitnesses, to swipe something from CS Lewis, I don’t know where, were around to blow the gaff if someone got out of hand. This is Bauckham’s big polemic: the form critics are not in line with the eyewitness theme at work in ancient history and the Gospels.

October 25, 2017 After That (Houston) Storm
Recent Comments
10 Comments | Leave a Comment
Browse Our Archives
get the latest from
Evangelical
Sign up for our newsletter
POPULAR AT PATHEOS Evangelical
1