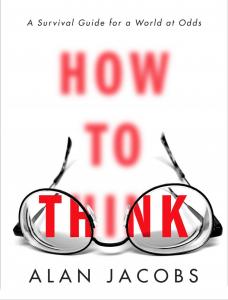 Alan Jacobs, Distinguished Professor of Humanities in the Honors Program of Baylor University, has a new book out: How to Think. An important topic. An essay excerpted from the introduction was published in the Wall Street Journal recently, brought to my attention by a friend who thought that as a Christian and an academic I might find it interesting. (Essay: Can Evangelicals and Academics Talk to Each Other?, behind a pay wall.)  An interviewer in The Atlantic characterizes the book as “part essay, part lament, part how-to guide for processing the world more generously.” In the WSJ essay Jacobs notes “… I belong to two very different and mutually suspicious groups. I am an academic, but I am also an evangelical Christian.”  When I hear academics talk about Christians I typically think, “That’s not quite right. I don’t believe you understand the people you think you’re disagreeing with.” And when I listen to Christians talk about academics, I have precisely the same reaction.“

Jacobs has spent his academic career at Christian institutions, first Wheaton, now Baylor. He knows what he is talking about professionally as a scholar and personally as a Christian. From my perspective, as a Christian and an academic at a secular institution I find this divide deeply frustrating (and it is probably worse in my environment than in Jacobs’). It lingers just below the surface, occasionally erupting directly. There is an assumed distinction between “us” and “them”. It is easy in the academy to assume that “they” are not among “us”. In many churches the same is true – the academics (and scientists) are distant others, not among “us”.

For many academics, evangelical Christians are the RCO; for many evangelical Christians, academics play that role. And having an RCO is one of the best ways to form and maintain group identity. Recent research by the political scientists Shanto Iyengar and Sean Westwood indicate that, in terms of social belonging, “outgroup animosity is more consequential than favoritism for the ingroup.” That is, its more important to hate the RCO than to affirm and support the people who agree with you. How do I know you’re One of Us? Because you hate the right people. (WSJ 10/20/2017)

In the introduction to his book Jacob notes, “This is a profoundly unhealthy situation. It’s unhealthy because it prevents us from recognizing others as our neighbors – even when they are quite literally our neighbors.” It is ironic that an academic community that supposedly values diversity and difference falls often into the trap of defining themselves in negatively – i.e. by what they are not … in contrast to others (RCOs). It is equally ironic, but even worse, that Christians so often define themselves negatively – by what they are not, again in contrast to others (RCOs).

How can we break out of this pattern? Should we?

What is the best positive way to define who we are?

October 27, 2017 The Bible Is Not A Toy
Recent Comments
6 Comments | Leave a Comment
"This article starts a series on what A Course in Miracles (ACIM) implies when acim ..."
burakdeniz The Miracles of Creation? (RJS)
"It is your confidence in these thoughts that needs pardoning and what causes absolution a ..."
burakdeniz The Miracles of Creation? (RJS)
"Scot, 1 Cor 16:15-18 asks the Corinthians to submit to the leadership of Stephanas and ..."
Richard Fellows Finishing Well With Clement
"I can only guess that they look at Trump as a kind of god like ..."
D.M.S. The Gospel of With Us and ..."
Browse Our Archives
get the latest from
Evangelical
Sign up for our newsletter
POPULAR AT PATHEOS Evangelical
1