Jesus Creed Books of the Year 2017

Book of the Year 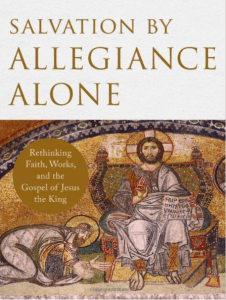 Matthew Bates, Salvation by Allegiance Alone, is the Jesus Creed 2017 Book of the Year. Biblically sound and penetrating, theologically alert, and pastorally sensitive. Bates challenges the weak-kneed but all too common understanding of faith as (merely) trust and demonstrates conclusively that if the gospel is about Jesus as Lord, then the response to the king is allegiance. This book deserves a study guide and a pastoral follow-up. Bates book came early in 2017 and it held on the entire year for me as the best book I read.

Books of the Year: Honorable Mention

Dennis Edwards, 1 Peter (Story of God Bible Commentary). I was privileged to see this from different angles: not only were we part of the committee that invited Dennis to write this commentary, but I was one of the editors and then I watched as one pastor or professor after another read it and said, “There’s something special here.” Dennis brings his expertise in New Testament into coalition with his three decades of pastoral experience to make this commentary exactly what the series intends to accomplish.

Greg Boyd, The Crucifixion of the Warrior God. Has to be the most provocative book I have read in a decade, and this is what I like: Boyd is unafraid of taking a stand. He knows where he stands — God revealed to us in Christ as the cruciform God — and lets that understanding of God reshape everything he sees in the Bible. This is pure theological interpretation of Scripture. People have wondered about God and violence (esp in the Old Testament), some have put forth their best efforts though often it comes off as special pleading, but Boyd said, “Hang it all, we have to do this all over from a different place.” He did and the book (and its one volume companion Cross Vision) deserves to be read carefully.

New Testament Book of the Year

Here is my bias: I’m a NT professor so my reading is often in New Testament books. I’ve already mentioned a few but I want to add another in this category.

Michael Licona, Why Are There Differences in the Gospels?

Old Testament Books of the Year

Tremper Longman, The Fear of the Lord is Wisdom.

Commentary of the Year

I couldn’t decide on the best commentary I got this year, so I will mention three outstanding additions to the commentary genre.

Jonathan Pennington, The Sermon on the Mount and Human Flourishing

Michael Wolter, The Gospel of Luke. Vol 2 came out in September, completing this two volume set.

Peggy Noonan, The Time of Our Lives. A collection of Peggy Noonan’s beautiful prose and commentary. OK, it was from 2015 but I’m behind on my essay reading.

Thomas Andrew Bennett, The Labor of God. I found this the most stimulating work on the atonement I’ve read in years.

This is a banner year for church historians with the 500th anniversary of the Reformation, and I have two books in that category but I found two others to be great reads and worthy of your shelf.

Kenneth Stewart, In Search of Ancient Roots. If anything, this book will become a rebuke of populist evangelicalism for its lack of theological rootedness.

David Downs, Alms. An intense scholarly book on almsgiving in the ancient church with attention to its redemptive value.

Kevin Vanhoozer, Biblical Authority After Babel. A careful balanced study of each of the solas.

Richard Rex, The Making of Martin Luther. Alongside the many books this year on the Reformation’s solas and the contribution of the Reformation, I highly recommend the sharp-eyed study of Luther — in beautiful prose — by Rex.

Science and Faith (by RJS)

Dennis Venema and Scot McKnight  Adam and the Genome.

I read four novels by Kent Haruf in 2017, and I found him an amazing if gritty writer.

Our Souls at Night

December 5, 2017 Communion, Eucharist, Lord's Supper: How Often?
Recent Comments
2 Comments | Leave a Comment
"'This renewal began first with the renewal of the people of God (chapter 5 or ..."
Kostya2 Putting the Bible Together
"In Christ, there is no Jew or Greek, male or female."
Silverwolf13 Go Home or At Home?
"I just started to read about Scot Mcknight! His arguments are good.However, I recommend Scot ..."
Yechan Namgoong Tim Keller under the Eye
"" if it be Your will" 1 John 4:14,15 says, 14And this is the confidence ..."
disqus_5T2jXBEN10 JesusCreed.org Blog Prayer
Browse Our Archives
Related posts from Jesus Creed