Ministry From (not for) the Blessing 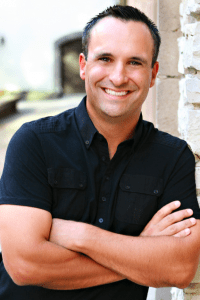 By Chris Seidman. Since 2001, Chris has served as lead minister of The Branch Church, a multi-site church in Dallas with more than 100 years of rich history.  Chris is privileged to preach occasionally in churches, on college campuses, and in conferences across the country and often has his golf clubs in tow. He is also distinguished as an author who has written more books than he has sold.  So he has that going for him.

Years ago, Barry Larkin of the Cincinnati Reds hit a game winning home-run off of Chicago Cubs relief pitcher Bob Patterson. After the game a journalist asked Patterson what kind of pitch he threw Larkin. Patterson described it this way – “It was a cross between a screwball and a change-up. It was a screw-up.”

This month I’m beginning my 26th year in full-time ministry with 20 of these serving as the lead minister for a church. I’ve thrown so many screw-ups. I taken great solace in the fact that, for a while, Jesus’ disciples really didn’t have the foggiest idea concerning the kind of Messiah Jesus was or all the implications of the message He sent them out to declare. Much of the drama of the gospels and Acts is the conflict between God’s job description for the Messiah and everyone else’s. And yet, in spite of the early disciples’ brokenness the early disciples were still used in powerful and redemptive ways. God’s capacity to work through us is not held hostage to our imperfection, ignorance, and sin. At the end of the day, Jesus uses broken vessels. He doesn’t have any other options.

As I reflect upon my own brokenness and how it has played out in ministry over the last 25 years, there’s a truth I’ve been soaking in for some time that’s been ever-so-gradually liberating me as a person and proclaimer in general, and as a servant-leader in my particular church. And I’ve needed to be liberated.

Henri Nouwen said there were three great lies that many Americans have bought into. “I am what I have. I am what I do. I am what people say or think about me.” One of those three lies may have more leverage on a person than the other two. But the chances are one of those three will hit home with most of the people we minister to. They hit home with me. Particularly the third one.

The “praise of others” has long been my elixir of choice. I’m not one of those who can say with relative ease – “I don’t really care what they say or think.” I always have cared – sometimes too much and for the wrong reasons.

I believe we all were created with a hunger for a sense of worth, significance, and value. We long to be told we matter. It’s worth noting that the very first thing God did with Adam and Eve after He created them was to “bless” them (Gen. 1:28). The Hebrew word there carries with it the connotation of verbally bowing one’s knee in adoration. I don’t know what went on at that moment exactly, but perhaps there was some proclaimed affirmation of worth and significance.

What’s interesting is that God “blesses” them before He ever gives them a command. He acknowledges them as significant and meaningful before they ever do anything. Perhaps this has something to do with us being referred to as human beings and not human doings.

This has massive implications for everyone, including ministers. We’re not immune to the temptation to derive our sense of worth and significance from what we have, or what we do or what others think about what we do. All along, God proclaims us worthy and significant on the basis of who we are as His image-bearers. And then He demonstrates it again at Golgotha. Will we live out of that story? Or will we live out of another story – a story that says our significance and worth is tied to what others think or say about us? Living out of this story doesn’t end well. This is where much of my anxiety and self-inflicted trouble in ministry has been rooted. It’s been said before that if we live by the praise of others then we’ll die by their criticism and rejection.

It’s worth noting how God “blesses” Jesus at His baptism. “This is my beloved Son with whom I am well-pleased” (Matthew 3:17). God’s proclamation over Jesus occurred before He ever preached to the masses or performed a miracle. Jesus’ sense of identity was firmly established in the wake of this blessing of God. To me, one of the most remarkable things about Jesus is that He lived and proclaimed from the blessing of God. In the meantime, I’ve been more familiar with living and proclaiming for the sake of getting a blessing from others. There’s a dramatic difference between doing ministry out of an awareness of who we are in Christ and doing ministry out of a desire to be told who we are by others.

Jesus was the freest person who has ever lived – free to be fully surrendered to the purposes of God, free to tell the truth, free to live with being misunderstood (and, for that matter, die misunderstood as well.) I want to be that free. I’m not there yet. But every now and then I’ve gotten a little glimpse of what it’s like when my sense of significance and worth is rooted in what God has declared and demonstrated on my behalf through Christ. When we live and minister from the blessing instead of for the blessing, we’re freed to live and minister in some wonderful ways. I’ll be reflecting on a few of these ways over the next three installments.

In the meantime, I’ll leave you with this – after 25 years of ministry, I’ve learned that living from the blessing of God instead of for the blessing of others maybe among the greatest of gifts I can give back to God, the people I serve, my family, and even myself.

Here’s to pitching a few less screw-ups the next 25 years.