Not So Sure About Scientists (RJS) 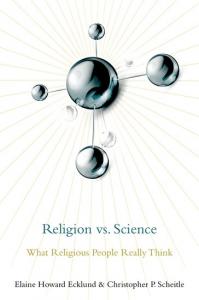 Although religious people including evangelical protestants like science, they are not so sure about about scientists.

The next chapter in the new book by Elaine Howard Ecklund and Christopher P. Scheitle, Religion vs. Science: What Religious People Really Think, explores the view that religious and religiously unaffiliated Americans have of scientists. They begin the chapter with the observation that American society tends to be segregated according to view. This is true on religious grounds – but also on political and social grounds. “Researchers also find that individuals with strong political identities are more likely to say that their closes friends share their political views and that they would prefer to live around people who share their views.” (p. 36)  Both evangelicals and Catholics are less likely to have a close friend working in science than the general respondent. For Catholics, but not for evangelicals, this difference remains statistically significant when the results are adjusted for the influence of demographic, educational and additional factors other than religion. It appears that it is general education level (lower among evangelical protestants) rather than religion that drives the difference in the unadjusted percentages. This is not true for Catholics.

Who are the scientists? Ecklund and Scheitle asked “How scientific do you view the following occupations?” The 13 options to rate were: biologist, engineer, plumber, anthropologist, TV weather forecaster,  high school chemistry teacher, psychologist, physician, pastor/teacher/clergyperson, electrician, sociologist and nurse. (p. 50). Biologist (69.7%) and physicist (60.8%) were most often viewed as “very scientific.” Although Ecklund and Scheitle don’t comment on it, I am surprised that biologist comes out above physicist. I would view physicist as easily the most scientific followed by biologist. Frankly, biologists seem to resort more often to “hand-waving” than physicists – primarily because life is incredibly complex and scientific rigor must (perhaps) be relaxed to make any progress at all. This is a minor distinction both are “very scientific.” Although religious people understand science and scientists as well as the general public, they are more likely to agree that “scientists should not be the only voice in conversations about science.” (p. 39)

Part of the problem is the visibility of some high profile atheist scientists. Ecklund and Scheitle asked half of the respondents (randomly selected) “have you heard of a scientist named Dr. Richard Dawkins?” and the rest ” have you heard of a scientist named Dr. Francis Collins?” While Dr. Dawkins is an outspoken atheist, Dr. Collins is a highly accomplished scientist and a Christian. Dr. Collins headed the human genome project and is now director of the National Institutes of Health, a position he was originally appointed to early in President Obama’s first term and retained by President Trump. (His scientific accomplishments far outweigh Dr. Dawkins’s scientific accomplishments.)

Only 3% of protestant and catholic Christians are familiar with Dr. Collins. This is a significant issue, and one that helps to reinforce the view that scientists are against religion and religious persons. A number of the people interviewed by Ecklund and Scheitle made comments that indicated a general belief that scientists are hostile and misuse science to put down Christians. “One mainline Protestant respondent told us: “I think that there are scientists for whom science is the religion.”” (p. 44) Another respondent noted “I think that [scientists] would be more apt to find a bone in the ground and say this is the missing link, this is what proves evolution, we can finally shut up those rotten Christians.” (p. 44)

Ecklund and Scheitle find that some religious believers think that scientists want to be God or more than God – i.e. science is a religion and scientists see themselves as not just the priests, but as the ultimate authority.

Lessons? It might be nice if more Christians were familiar with Francis Collins and his understanding of the compatibility of science and religion. However, this is not the most important way forward. Rather than one famous scientist – who can be dismissed as a special case – it would help if Christians were familiar with a  wider range of scientists.

Educational programs are needed to help faith leaders develop a foundational fluency in scientific topics. New mechanisms are needed to expose religious leaders to scientists and scientific sources of information, so that they are better equipped to guide their congregants on scientific questions. Scientists and science communicators can also help by expanding their venues for science outreach to religious communities and congregations. (p. 49)

Sometimes I just wish my scientific colleagues would learn to separate metaphysical and scientific conclusions. It does us no good to use science as an anti-religion club.

What do you think of these take-home lessons?

What is the best way to make the right connections between science and Christian faith?