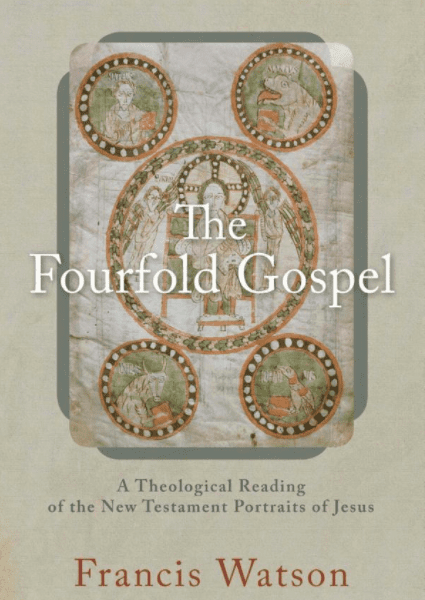 Why are there four Gospels? Why do some combine them into a single narrative, a harmony? Why do some find in minute differences a world of meaning? Why are some in the Bible and not others?

If you need an introduction to such questions, and many others, here is an accessible book for you.

Francis Watson is making a name for himself as an expert on the Gospels and why there were four of them. His big book was called Gospel Writing and his newer, more accessible (but not a summary of the larger one) is called The Fourfold Gospel. The first chapter of The Fourfold Gospel is a series of questions:

Apocryphal Gospels along with fragments of Gospels were all over the place in the early church, and some churches used more than our four.

To an Egyptian Christian of the third or the sixth century, the answer to the question “How many gospels?” might not have been straightforward. He or she would be aware that just four gospels were authorized for reading in church, and yet be convinced lat authentic and valuable gospel literature was to be found beyond the church’s limit.

At this time there was still nothing inherently wrongheaded about the Rhossian adoption of a further gospel, even for an impeccably orthodox bishop. Nevertheless, the request for permission to use it also implies an established usage of other texts. We may assume (though we cannot be sure) that no one ever wrote to Serapion for permission to use Matthew, Mark, Luke, or John. |

If the New Testament contains four gospels, that does not mean that only four gospels were written. It means that four gospels were selected from a wider range of gospel literature to serve as a basis for the church’s preaching, teaching, and worship. The four-gospel collection is the work not just of individual evangelists but of the church.

Matthew and Luke incorporate most of Mark; did they think they were replacing Mark? Watson thinks Luke used Matthew: did he think he was replacing Matthew?

So the questions arise: Do we have here two gospels, or two editions of a single gospel? Does Luke then add a third edition? Are the evangelists more like individual authors or anonymous editors?

Have Matthew and Luke produced new editions of older material, perhaps even in competition with each other? Does either of them envisage any future for Mark as an independent work?

However these texts were originally related, all that changes when they are set alongside one another within the fourfold canonical collection. The church’s decision to acknowledge four gospels does not simply recognize them for what they are; it also bestows on each of them its own independent status and validity.

But the gospel itself is not written. It is an interpersonal event, a communication in which one speaks and others hear, occurring at a particular time and place. The gospel for Paul is “the gospel of Christ,” for it is Christ who has sent him to preach it, Christ who speaks through it, and Christ who is its content.

A written text that narrates this same train of events is certainly gospel-like, but the extension of the term “gospel” into the sphere of writing still needs an explanation.

Until, he says, Mark 1:1 and Mark’s attempt to make his book a Gospel.

The underlying idea is that his text is the embodiment and continuation of the original apostolic preaching. In writing the gospel, the evangelist ensures that the apostolic testimony is extended to future generations.

Watson needs to take more cue from 1 Cor 15 and even from a more basal expression, 2 Tim 2:8, not to ignore the gospel sermons in Acts (all confirming again CH Dodd’s point). There the “gospel” itself is an announcement of the prime events in the life of Jesus and their saving impact, so the Gospels are called “gospel” because they tell that same story.

Yes, they appear to be originally anonymous, though this is not as known as some thing. But he thinks it was the recognition by the church of these four Gospels that led to the use of a name with them: Matthew, Mark, Luke, John.

What makes the names necessary is the construction of the canonical boundary. A line is drawn around certain texts that definitively separates them from other similar texts. To draw the line at all, the texts it encloses must be identifiable. That is why the first full set of evangelists’ names—Matthew, Mark, Luke, and John—appears at precisely the moment when it is first claimed that the church must acknowledge just four gospels.

There was nothing inevitable about the four-gospel collection. None of the individual evangelists would have anticipated it. If they had done so, they might not have welcomed it: differences between gospels can often be interpreted as active disagreements.

One way or another, use or awareness of four gospels must have had a broad-enough basis for Irenaeus’s proposal that there should be four gospels to seem plausible and reasonable.

The fourfold canonical gospel might have turned out quite differently, but that does not make it “arbitrary.” It took the form it did not because some bishop or council forcibly imposed it on an unwilling or unthinking majority but because of countless small-scale decisions about which texts were to be copied and used and which were to be passed over. Irenaeus’s concept of a fourfold gospel offers an interpretation of the general tendency of those small-scale decisions, and his interpretation became normative only because it was and still is accepted as credible and true.

The excellence of this book is in spite of the fact that there is a spelling issue — we have four Gospels (upper case for books) and we preach the gospel (lower case for message). This is not a British issue (where it seems gospel is used for both), but this is an American publisher and the book has double quotation “marks,” not that elegant English single quotation ‘mark’.

March 5, 2018
Mike Bird And Tradition: Pointing Out A Translation Bias
Next Post

March 5, 2018 Akeptous Confesses Jesus As God
Recent Comments
0 | Leave a Comment
Browse Our Archives
get the latest from
Evangelical
Sign up for our newsletter
POPULAR AT PATHEOS Evangelical
1