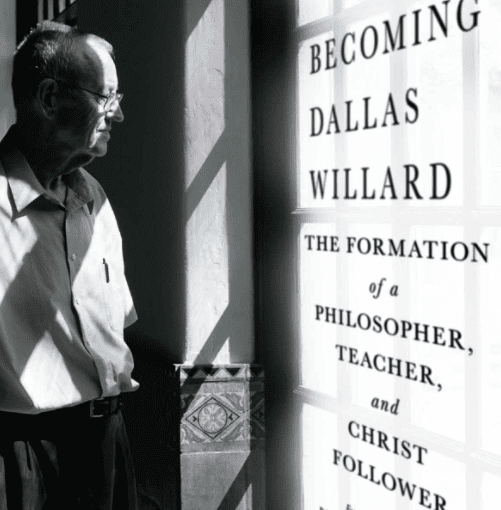 These — “his presence lingers” — are the words of John Ortberg in the Afterword to Becoming Dallas Willard (by Gary Moon).

It’s an extraordinary book because Dallas was an extraordinary man. This book is a “paraclete” for Dallas’ own works; one doesn’t become conscious of Moon’s views or theories or voice; everything in the book turns the reader to Dallas, and not a few times I was tempted to put it down and go read something from Dallas himself. (That’s what I mean by “paraclete”: he’s an advocate for Dallas; he keeps the reader’s mind on Dallas.)

I was with Dallas only once, at the kind of invitation of James Bryan Smith at an Apprentice event at Friends University and I spent about ten minutes in the hotel lobby with Dallas that day. I won’t forget something he said: “Aristotle is so cold.” He didn’t have to convince me about Aristotle but he was speaking of virtue ethics themselves in the Aristotelian mode. I do sense that what I experienced of Dallas at the 2-3 day event does linger. This book brought back my careful readings of Dallas’ books.

Lingering will be the experience of reading Becoming Dallas Willard. Those who have read him — Divine Conspiracy, The Spirit of the Disciplines, and Renovation of the Heart, not to forget Hearing God — will read this biography and find those books of his they have read or the experiences they have had with him lingering in fresh ways.

I don’t want to spoil this book by giving away too many secrets but I will give some big basics: Dallas grew up among the poor farmers of rural Missouri; his mother died when he was young and his father and his new wife were not as attentive to young Dallas as they should have been; Dallas’ older brother and his wife took young Dallas under their care; Dallas went to college at Tennessee Temple, which for those who know know that it was the epitome of southern fundamentalism; Dallas loved John R. Rice and learned to preach in a revivalist manner and married Jane (their relationship is very prominent in this biography).

All of his life changed when (1) he discovered a deeper spiritual life through Bible reading and prayer and reading great masters and (2) his mind was broadened through serious thinking and reading — people like C.S. Lewis and Thomas a Kempis — and he became a pastor, then he needed more education and went to Baylor, where his love for philosophy came into view. Then he went to the U Wisconsin and did a PhD. He was offered four jobs and took one in the philosophy department (he focused on Husserl and was a realist) at USC and became the Dallas Willard who lingers among us.

Moon keeps the narrative moving and it would have been very easy to turn a study like this into a critical biography that examined all of Dallas’ ideas, but Moon keeps it personal and so for the general reader and not the specialist. Every chapter concludes with a “Becoming Dallas Willard” section, and each summarizes the elements of that chapter that became characteristic of Dallas himself.

If you’ve never read Dallas Willard, buy this book and then read one of the books I link to above. If you have read those books, you will certainly want to read this book.

April 11, 2018 The Spirit And Discernment (Today)
Recent Comments
4 Comments | Leave a Comment
"This article starts a series on what A Course in Miracles (ACIM) implies when acim ..."
burakdeniz The Miracles of Creation? (RJS)
"It is your confidence in these thoughts that needs pardoning and what causes absolution a ..."
burakdeniz The Miracles of Creation? (RJS)
"Scot, 1 Cor 16:15-18 asks the Corinthians to submit to the leadership of Stephanas and ..."
Richard Fellows Finishing Well With Clement
"I can only guess that they look at Trump as a kind of god like ..."
D.M.S. The Gospel of With Us and ..."
Browse Our Archives
get the latest from
Evangelical
Sign up for our newsletter
POPULAR AT PATHEOS Evangelical
1