Non-Disparagement Agreements And Truth-Telling In The Church: Willow Creek

More and more churches and Christian institutions are establishing and demanding non-disclosure agreements as well as (even more) non-disparagement agreements.

Non-disclosures, for the sake of this blog post, pertain to intellectual property like a church creating a discipleship computer program with a person’s knowledge; that person leaves and is asked/required not to talk about that program.

In non-disclosure agreements money can be exchanged as a reasonable severance for work done, and such standard severance is often not a problem in churches. One friend told me he was paid one month salary for every year he had worked as his severance upon leaving.

Money being offered in non-disparagement agreements can be a messy and sometimes profoundly evil transaction. At times people are asked with an offer of money to hide acts that are wrong, evil, and even criminal; some are asked for money not to talk about a corrupted institution. And sometimes sizable sums of money are involved. Way too much money for churches. Sometimes the discussion involves ambushing the employee, sometimes there are threats and bullying and intimidation. Sometimes all that is said is “Please finish well” with a meaning that is very clear to the employee.

In Non-Disparagement Agreements the money can easily become hush money, bribery, silence for shekels. It’s morally wrong and contrary to truth telling. (And I’m not saying all NDAs are always always always wrong.)

I’m willing to stiffen that judgment with some starch: no one with a theologically-informed ethic should be thinking of non disparagement agreements when the issue is dirt on the floor in the church. Such a person, instead of advocating silence, should be advocating rebuke and repentance and a return to basics, including unflinching truth telling.

Willow Creek South Barrington (I don’t know about other campuses in this regard) is guilty here and it needs to be discussed.

[Not only has Willow — again, always South Barrington in this article — signed NDAs they have also initiated more than fifty restraining order type letters (one published on this blog last week) that are absent of pastoral expression or pastoral plans for restoration. (These are not in view below.)]

All that matters in what follows is (1) non-disparagement agreements about (2) actions that are unChristian and sinful for which (3) Willow offers money and a person signs an agreement of silence with money exchanged. My contention is that Willow is morally wrong offering such an agreement. I assume there are times when the best situation is for both parties not to talk. However, it is never right to hide a sin for money. I hold the stronger party most liable for creating the situation. The stronger party (Willow) is asking the employee to compromise her or his moral integrity to sign the agreement. But the stronger party is implicated for sin its own action because they only reason for asking for the agreement is because it knows something that is wrong has been done and it wants it not known.

Some Questions for Us to Discuss

My questions: Is it right for a church, and in most cases the Human Resources Department of a church, to demand or to contract silence about an unChristian, unbiblical and perhaps even criminal action? Is the person who signs such a contract/agreement obligated to silence? What if the contract was agreed to under some coercion or duress or threat or bullying? What if the person who signed the agreement comes to a conviction later that the church was profoundly wrong and they now regret having signed it? Can they speak up?

Thinking about NDAs through the Demander

The Demander (Willow Creek’s Human Resource agent with WCCC behind it) has sometimes violated the relationship he/she has with the Demanded as brother or sister in Christ. Instead of gospel-shaped truth-telling, the Demander violates the gospel. The Human Resources Deparment at Willow Creek has sometimes violated the gospel in creating a Non-Disparagement Agreement in exchange for silence when the matter being silenced is a moral or professional failure and WCCC then also prohibits the truth from being told.

Now more questions: What if the one who is being asked to sign an agreement recognizes Who it is that is demanding the agreement as inconsistent with Christian truth? What if one realizes that what was asked of the person is out of line with Christian fellowship? What if “I” then become convinced the Demander was acting in an evil system of powermongering that needs to be resisted by telling the truth? Would not the Demanded become the prophet telling the truth to the Demanded and the System that created the Demander?

Here’s the bigger question: Why in the world is a church in this situation? Are not Non Disparagement Agreements already an admission that something is seriously wrong?

It is my contention that when the Demander has violated “in Christ” relationships (truth-telling, silencing sins and violations, etc) the agreement ought to be reconsidered and considered invalid. But don’t do so until you talk to an employment lawyer.

September 12, 2018
Faith in the Shadows (Austin Fischer)
Next Post 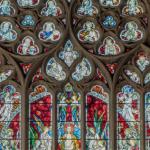