The Pastor Negotiates With The Empire 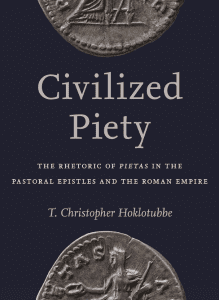 The operative term here is “negotiate.” Not antagonize, not so much accommodation. Negotiate. The Pastor is the author/audience of The Pastoral Epistles. I think a case can be made for the Pastor being Paul, but that’s not a concern in this post. Negotiation is.

Behind the term “negotiation” is another term: eusebeia, which is translated consistently in the NIV as “godliness,” which is a decent translation, but I will cite the NRSV below and add [eusebeia] where it used in the NRSV. Here are the unusually-dense number of occurrences of this term in the Pastoral Epistles [=PE]:

1Tim. 2:2 for kings and all who are in high positions, so that we may lead a quiet and peaceable life in all godliness [eusebeia] and dignity.

1Tim. 3:16 Without any doubt, the mystery of our religion [eusebeia] is great:

He was revealed in flesh,
indicated in spirit
seen by angels,
proclaimed among Gentiles,
believed in throughout the world,
taken up in glory.

1Tim. 4:7 Have nothing to do with profane myths and old wives’ tales. Train yourself in godliness [eusebeia],  8 for, while physical training is of some value, godliness [eusebeia] is valuable in every way, holding promise for both the present life and the life to come.

1Tim. 5:4 If a widow has children or grandchildren, they should first learn their religious duty [eusebein] to their own family and make some repayment to their parents; for this is pleasing in God’s sight.

1Tim. 6:3 Whoever teaches otherwise and does not agree with the sound words of our Lord Jesus Christ and the teaching that is in accordance with godliness [eusebeia],

1Tim. 6:11   But as for you, man of God, shun all this; pursue righteousness, godliness[eusebeia], faith, love, endurance, gentleness.

2Tim. 3:5 holding to the outward form of godliness [eusebeia] but denying its power. Avoid them!

2Tim. 3:12 Indeed, all who want to live a godly life [eusebos] in Christ Jesus will be persecuted.

Titus 1:1   Paul, a servant of God and an apostle of Jesus Christ, for the sake of the faith of God’s elect and the knowledge of the truth that is in accordance with godliness [eusebeia].

Titus 2:12 training us to renounce impiety and worldly passions, and in the present age to live lives that are self-controlled, upright, and godly [eusebos].

Why this term? In his new, exceptional and elegantly argued book Civilized Piety: The Rhetoric of Pietas in the Pastoral Epistles and the Roman Empire, T. Christopher Hoklotubbe examines this term eusebeia (or piety, pietas in Latin) in the context of the Roman Empire. He makes a compelling case that this term is the Pastor’s (he’s not convinced of Pauline authorship but neither does he make a big deal of this — Hoklotubbe is admirably kind in disagreement and cautious in conclusions) way of negotiating with the Empire. How so?

Second, this term eusebeia has political and cultural weight and using “godliness” as its translation (I speak here for myself) suggests less Empire-resonance and probably more of a Christian theology and sanctification context. Here’s Hoklotubbe:

Whereas in the Roman period the Greek eusebeia tended to signify both a reverent attitude toward and proper ritual conduct before the gods, the Latin pietas encompassed an affectionate dutifulness directed also to one’s parents, homeland, and emperor. Pietas was the fulfillment of ones filial, religious, civic, and imperial obligations that sustained reciprocal relationships between kin, neighbors, allies, and contracting parties as well as demonstrated reverent loyalty toward country, divinity, and ruler. … Claims to piety in the ancient world carried a significant amount of cultural prestige that has yet to be appreciated among most modern interpreters of these letters.

Augustus (27 BCE to 14 CE) believed decline in Rome and the civil wars were connected to the decline of piety. So he renewed the ancestral customs, and adherence to them was piety.This approach to piety was promoted in the Aeneid and marked the Romans as distinct (vs. superstitions like Judaism or atheisms). Christianity was for this approach a foreign superstition and potentially subversive. Hoklotubbe’s chapters canvassing this information is very well done. What needs to be seen then is that piety expressed and purchased social prestige:

Roman pietas within the scope of imperial self-representation and promotion signified a range of connotations, including loyalty and devotion to the gods, emperor, nation, and family.

Third, the argument is that, somewhat like Josephus and Philo, the Pastor uses a very common term of high respect in the Empire to promote the cultural legitimacy and desirability of Christian ideals and theology in Western Asia Minor. Loyalty to the emperor, expressed as prayers for the emperor, and 1 Timothy’s use of language associated with the “mysteries” of Artemis fit this schematic reading of the PEs in the context of “civilized piety.” The number of instances above testifies to the importance of this term, and clearly these instances are in significant passages in the PEs. What he wants is nothing less than for the Empire to recognize these Christians as embodying the highest ideals of a virtue central to Roman identity.

… the author of the Pastorals appropriates contemporary ideas about piety in order to construct a culturally dignified and civilized Christian identity for his audience to embody so that the ekklesia might better navigate the treacherous waters of popular prejudices among their neighbors.

Describing 1 Timothy 2 as negotiating its imperial situation can coherently account for, on the one hand, the author’s explicit compliance with imperial authority and, on the other hand, his application of titles associated with the emperor to both God and Jesus, however slight a polemic it might represent. Such a description “resists the binary representation of social antagonism,” which would classify this passage as either accommodation or resistance. Negotiation holds together both postures toward imperial power in a dialectical relationship that mutually informs the rhetorical work of this passage.

For those wrapped up in anti-empire hermeneutics this will not be a welcome use of the very same evidence for a different explanation: not resistance but negotiation. I find Hoklotubbe not polemical but cautious and balanced. The modest, chaste wife, then, is part of the same negotiation motif. The wealthy, too, are both valued as benefactors but warned about Roman cultural values that are not in line with Christian values.

Fourth, and yet… alongside the negotiation of the term eusebeia are very clear differences between the Empire’s religious and cultural values. Thus, this term in context reveals this is not about accommodation or capitulation but about negotiation. That is, “what we believe and practice is the very thing you Empire folks value but we do so in a different context.” Piety, for the Pastor of the PEs is connected to the tradition of the gospel and those who are responsible to be its guardians. There is here both a gospel subversion and a negotiation with Rome in wanting Christians to be perceived as possessing eusebeia.

The author of the Pastorals represents the ekklesia as civilized and loyal imperial subjects who embody pietas—the very virtue that made Rome great—while redefining the contents of this virtue around their devotion to Christ (145).

The author of the Pastorals attempts to portray Christians as civilized and exemplary participants within the Roman social order who nevertheless maintained their theological distinctiveness (which, of course, could be considered “countercultural” in its own respect), representing a singular strategic response of what might be considered a “sly civility” along a spectrum of early Christian attempts to negotiate their imperial situation (216).

October 8, 2018 Abuse Prevention: Start Here
Recent Comments
2 Comments | Leave a Comment
"Hi Dr. McKnight and others,I wish to make a couple observations concerning what is the ..."
David Russell The Gospel of With Us and ..."
"I am just amazed at the hedging against “male leadership” in marriage, and the church. ..."
Tom Harmon Elisabeth Elliot and Me (by Ruth ..."
"Christians are attacked for following a man who may not be a Christian or be ..."
Kelly Church Attendance is Down, But Why?
"I don't know where you are from,but in THIS country, WE are the 'government', and ..."
Christiane Smith Is Religious Freedom an Issue Today ..."
Browse Our Archives
Follow Us!