The Book of Revelation’s Trumpets Of Terror 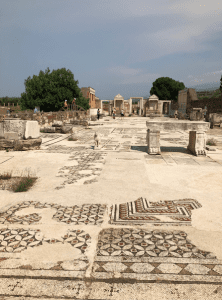 What about those trumpets of terror that unfold in Revelation 8-11?  For our posts on Revelation we are reading Craig Koester Revelation and the End of All Things and Ian Paul, Revelation.

I have reformatted Koester’s wonderful summary into separable points:

Seven trumpets are blown in succession, creating the third cycle of visions in Revelation. At the conclusion of the previous cycle, a graceful silence lingered in heavens chambers after the voices in the celestial chorus had sounded the “Amen” in their praises of God and the Lamb (7:12; 8:1). Rather than allowing readers to bask in quietude, however, John directs attention to seven angels, who are given seven trumpets, whose sound will break the stillness and signal an onslaught of new visions even more terrible than those that have gone before (8:2).

This section plays a major role in showing how God s purposes are to be understood.

What if God responds with wrath?

The opening scene in which prayers rise from the altar (8:3-5) recalls how the martyrs under the altar had demanded to know how long God would delay in bringing justice against those who had shed their blood (6:9-11). The trumpet visions now reply to the prayers by implicitly raising a question: What if God responds to the prayers by sending wrath on the unrepentant world? What will that accomplish? Readers are shown the horror of pitiless wrath as disasters strike earth, sea, and sky, and demonic hordes of locusts and cavalry torment humanity amid clouds of fire, smoke, and sulfur (8:7-9:21).

Yet the wrath accomplishes nothing. The wicked simply persist in their refusal to repent (9:20-21). At this point readers might well expect the seventh trumpet to signal the arrival of God’s catastrophic judgment with earsplitting finality. But the last trumpet does not sound and the end does not come.

Instead of the End, what comes next?

Instead, there is an interlude (10:1-11:19), just as there was an interlude before the end of the previous cycle of visions (7:1-17). An angel interrupts the seemingly inexorable movement toward judgment by calling a halt to the devastation and commissioning John to prophesy again (10:1-11).

We need a witness!

The interlude shows that what is needed is not wrath but witness. So John depicts two witnesses, who represent the church, bearing witness to the unrepentant world. Their testimony elicits opposition, which culminates in their death (11:1-10). Yet God raises them and then an earthquake occurs as a sign of judgment—but the judgment is much less severe than before.

Knowing the mind of God

The interlude reveals that God has delayed bringing justice for the deaths of the faithful in order that his people might continue bearing witness to the unrepentant world. Repentance, not destruction, is what God desires, and the church—even in its suffering—has an ongoing part to play. When the inhabitants of the earth give glory to God, the seventh trumpet sounds and heavenly voices announce that “the kingdom of the world has become the kingdom of our Lord and of his Christ, and he shall reign forever and ever” (11:15)- With that prospect of redemption for the world, readers find themselves again in the heavenly throne room where the twenty-four elders fall on their faces before God and sing thanks to him, just as they have done again and again (11:16-18; compare 4:11; 5:8-14; 7:11-12,