By my friend Allan Bevere: 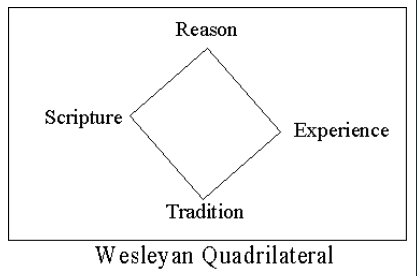 In this post, I am not really offering any new insights or a new perspective. But I decided to post on this subject because I think it is important to make the case once again that the so-called Wesleyan Quadrilateral (as has been said many times) is neither Wesleyan nor a quadrilateral, even though we UMs continue to employ it. The fact that we do so reveals we are much less Wesleyan than we in actuality affirm.

For those not versed in the Wesleyan Quadrilateral, the following definitionis helpful:

The phrase which has relatively recently come into use to describe the principal factors that John Wesley believed illuminate the core of the Christian faith for the believer. Wesley did not formulate the succinct statement now commonly referred to as the Wesley Quadrilateral. Building on the Anglican theological tradition, Wesley added a fourth emphasis, experience. The resulting four components or “sides” of the quadrilateral are (1) Scripture, (2) tradition, (3) reason, and (4) experience. For United Methodists, Scripture is considered the primary source and standard for Christian doctrine. Tradition is experience and the witness of development and growth of the faith through the past centuries and in many nations and cultures. Experience is the individual’s understanding and appropriating of the faith in the light of his or her own life. Through reason the individual Christian brings to bear on the Christian faith discerning and cogent thought. These four elements taken together bring the individual Christian to a mature and fulfilling understanding of the Christian faith and the required response of worship and service.

Of course, the problem with this definition is that it does not in and of itself affirm a quadrilateral. If Scripture is “considered the primary source and standard for Christian doctrine” then it simply cannot occupy one side of a four sided shape. The quadrilateral gives the false impression that Scripture, tradition, reason, and experience are four equal components in determining what is authoritative for the church. Moreover, what too often happens in UM circles is that when the quadrilateral is employed, it is most of the time used for the purpose of pitting one of the four “principal factors” against the others (usually to pit experience against Scripture).

Another problem here is the use of experience as a category outside of the other three as if there is something called experience that can be separated out from the church’s experience of reading Scripture, referring to its traditions, and reasoning through both. It is true that John Wesley was big on one’s experience of Jesus Christ, but he would have never embraced the idea that experience is somehow co-equal with Scripture and tradition, nor that it should ever be pitted against the Bible itself. Indeed, as all who have at least a general understanding of this subject know, Wesley never employed the quadrilateral imagery. It was that great Methodist theologian, Albert Outler, who coined the term and later wrote, “The term ‘quadrilateral’ does not occur in the Wesley corpus—and more than once, I have regretted having coined it for contemporary use, since it has been so widely misconstrued” (Quote taken from Kevin Watson). And Randy Maddox has suggested that “Wesley’s so-called ‘quadrilateral’ … could more adequately be described as a unilateral rule of Scripture within a trilateral hermeneutic of reason, tradition, and experience.”
Moreover, the way many Methodists use the term “experience” in popular church circles less resembles Wesley and looks more modern with sentimental twists. Methodist theologian Stanley Hauerwas says that certain church traditions should not be allowed to use some theological terminology because they have so abused it. For example, he says that Episcopalians should refrain from using the word “Incarnation” because what they mean is “God became flesh and said, ‘Hey, this ain’t bad!'” Well, I think the same needs to be said of United Methodists and experience because when UMs employ the term all they really mean is “this is how I feel.” In addition, the appeal to experience in this way continues to reinforce the rampant individualism of the surrounding culture that has infected the church, where folks in the pews believe that their faith is basically only between them and God with no communal aspect whatsoever, other than gathering with other individuals at church for a potluck supper on occasion. The me and Jesus approach to faith ends up in reality being the me approach to faith with just a little Jesus here and there.
Behind all of this, unfortunately, is the contemporary UM aversion to doctrine. As Andrew Thompson writes,

American Methodists tend to balk at a full embrace of doctrine because they’ve always tended to be more American than Methodist. In popular American culture, anything that gets in the way of unlimited freedom of individual action or opinion is seen as, well, un-American. Thus Christian discipleship must always conform to what good, consumer-oriented and radically democratic Americans think it should.

That idea would strike John Wesley as bizarre. After all, his agenda at the first annual conference in 1744 was centered on considering the questions, What should we teach? How should we teach it? And what should we be doing, practically?

I would suggest that the reason the quadrilateral continues to be employed in UM circles is because of our mainline Protestant aversion to doctrine. Experience becomes the trump card played when Christian doctrine gets in the way of our unlimited freedom.
I think Tom Wright has given us a more helpful way to think about these matters. Instead of a misleading quadrilateral,

…scripture, tradition and reason are not like three different bookshelves, each of which can be ransacked for answers to key questions. Rather, scripture is the bookshelf; tradition is the memory of what people in the house have read and understood (or perhaps misunderstood) from that shelf; and reason is the set of spectacles that people wear in order to make sense of what they read– though, worryingly, the spectacles have varied over time, and there are signs that some readers, using the “reason” available to them, have severely distorted the texts they were reading. “Experience” is something different again, referring to the effect on readers of what they have read, and/or the worldview, the life experience, the political circumstances, and so on, within which that reading takes place (The Last Word).

“Experience” is far too slippery for the concept to stand any chance of providing a stable basis sufficient to serve as an “authority,” unless what is meant is that, as the book of Judges wryly puts it, everyone should simply do that which is right in their own eyes (The Last Word).

Part of the value in Wright’s reconception here is that Scripture, tradition, reason, and experience are not treated as a like kind, which they are not. The quadrilateral, on the other hand, presents such an illusion.
The problem, as Thompson rightly notes, is that we Methodists tend to be more American than Methodist. Thus, the quadrilateral continues to be embraced when it should be rejected… at least if we want to be good Wesleyans.
Previous Post

October 29, 2018
Book of Revelation: What Most Evangelicals Entirely Miss
Next Post