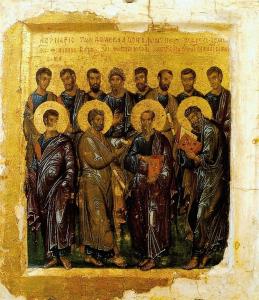 The Apostles’ Creed ends with a simple word. Ben Myers (The Apostles’ Creed) reflects on this last word: “To say amen to the creed is to sign my name to it. I confirm the truth of this: I authorize it: amen.” (p. 131)

Amen is a word we all know … but not really. It is the appropriate way to end a prayer, but why? Four letters with no intrinsic meaning? It is more, however, than a ritualized ending to prayer.

The word is found often in the New Testament. In the letters of Paul and Peter as well as Revelation it is used as part of a salutation or benediction. It ends the book of Revelation and our Bible “Amen. Come, Lord Jesus. The grace of the Lord Jesus be with God’s people. Amen.” The word amen (ἀμήν) is also found in many of Jesus’ sayings often translated truly as in Truly I say to you (ἀμὴν λέγω ὑμῖν).

Amen is an affirmation of certainty, faith, belief, truth. At the end of a prayer or the creed it could be translated “so be it.”

But as surely as God is faithful, our message to you is not “Yes” and “No.” For the Son of God, Jesus Christ, who was preached among you by us—by me and Silas and Timothy—was not “Yes” and “No,” but in him it has always been “Yes.” For no matter how many promises God has made, they are “Yes” in Christ. And so through him the “Amen” is spoken by us to the glory of God. Now it is God who makes both us and you stand firm in Christ. He anointed us, set his seal of ownership on us, and put his Spirit in our hearts as a deposit, guaranteeing what is to come. (2 Cor. 1:18-22)

We affirm the creed and it is God who makes us stand firm in Christ.  Myers puts it like this:

The whole creed is about God’s action, God’s agency, God’s initiative. Even at the end when we pronounce the amen, we are drawing not on our own resources, but God’s. We are participating in the action of Jesus, who looks in the face of God and sees all God’s ways and works and says: “Yes! Amen!” When we say the creed, we echo his mighty and eternal amen with our own small hopeful voices. (p. 132) 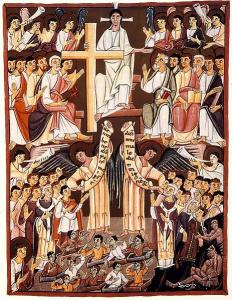 I believe. As we affirm the creed we begin I believe. A phrase that seems personal and individualistic. But Myers argues that this is not the right way to think about the creed.

It is intensely personal when I say “I believe.” I say the creed as if the words applied to me alone. But beneath and within and around my own personal “I,” I hear the surge of a greater voice. There is a corporate “I” in which my own voice participates. This corporate “I” is the body of Christ – which really means Christ himself as the unifying head of a new human society. (p. 134)

In affirming the creed we, and more specifically I, join the body of Christ and move into God’s plan for the world. From the beginning, “I believe in God the Father, almighty” to the end “I believe in the life everlasting,” I place myself in God’s hands and raise my voice in unison with his people.

Michael Bird (What Christians ought to Believe) ends with Revelation 21:3. “And I heard a loud voice from the throne saying, “Look! God’s dwelling place is now among the people, and he will dwell with them. They will be his people, and God himself will be with them and be their God.”” We look forward to the age to come when this will come to full completion.

A fitting end to our series on the Apostles’ creed. A rule of faith for the church, a baptismal formula, a catechism for the believer, a synopsis of Christian theology and the gospel story.

Now to the King eternal, immortal, invisible, the only God, be honor and glory for ever and ever. Amen.

I believe in Jesus Christ, his only Son, our Lord.
He was conceived by the power of the Holy Spirit
and born of the Virgin Mary.

He suffered under Pontius Pilate,
was crucified, died, and was buried.

He descended to the dead.
On the third day he rose again.
He ascended into heaven,
and is seated at the right hand of the Father.
He will come again to judge the living and the dead.

I believe in the Holy Spirit,
the holy catholic Church,
the communion of saints,
the forgiveness of sins,
the resurrection of the body,
and the life everlasting.
Amen.

November 20, 2018 Thanks SCOTUS Justice Sotomayor
Recent Comments
6 Comments | Leave a Comment
"This article starts a series on what A Course in Miracles (ACIM) implies when acim ..."
burakdeniz The Miracles of Creation? (RJS)
"It is your confidence in these thoughts that needs pardoning and what causes absolution a ..."
burakdeniz The Miracles of Creation? (RJS)
"Scot, 1 Cor 16:15-18 asks the Corinthians to submit to the leadership of Stephanas and ..."
Richard Fellows Finishing Well With Clement
"I can only guess that they look at Trump as a kind of god like ..."
D.M.S. The Gospel of With Us and ..."
Browse Our Archives
get the latest from
Evangelical
Sign up for our newsletter
POPULAR AT PATHEOS Evangelical
1