The Face Of Modern Theological Liberalism 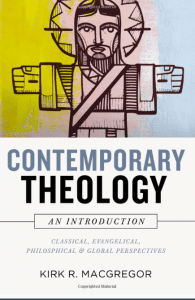 What is liberalism? is often better framed as Who is a liberal theologian? Unfortunately, some point at someone today and what is not said is that this person is no more liberal, and sometimes less so (!), than the accuser. It’s best to look at the face of modern liberalism himself.

There is now a book that covers many, if not most, of these names, movements and methods, by Kirk MacGregor, and it’s called Contemporary Theology: An Introduction — Classical, Evangelical, Philosophical, and Global Perspectives.

The face of modern liberalism is Friedrich Schleiermacher. Long time ago, for sure. German and not English or America, for sure. Issues and debates no longer interesting, for sure. But, once you grasp him you grasp the heart of what liberalism is. He was a part of the Enlightenment and beloved by the Romantics.

MacGregor opens his chapter (2 of the book) with this very pointed description:

Friedrich Schleiermacher (1768-1834) was the first professional Protestant theologian to propose across-the-board revisions of traditional Protestant beliefs reconcilable with the Zeitgeist of modernity. Schleiermacher is the first modern theologian because he starts with the autonomous self and what she can  grasp or prove of God. The result marked the birth of modern liberal theology, a style of theology that locates piety within the individual as the Gefühl— the feeling of being totally dependent on something infinite that manifests itself in and through finite things. …

It is well known that Schleiermacher’s project was as much about apologetics (of his sort) as it was about exegesis or theology or history. He wanted the Christian faith to be understandable and amenable to his contemporaries. By the way, a brand new edition of his The Christian Faith is now available.

Hence Schleiermacher desired to locate a point of contact for Christianity in his circle of friends, most of whom were highly skeptical of traditional religion. For them he wrote On Religion, which postulated that the essence of religion does not lie in anything supernatural, dogmatic, churchly, or ritualistic. Rather, the essence of religion is a “fundamental, distinct, and integrative element of human life and culture, namely, the Gefühl. This innate and distinctively human faculty of deep inner experiential awareness is each person’s “religious a priori”—a religious sense that everyone brings to their experience. This religious sense is a “feeling of absolute dependence” in which each person recognizes she or he utterly depends on something infinite beyond the self.

On God in Schleiermacher’s Christian Faith:

Thus “all attributes which we ascribe to God are to be taken as denoting not something special in God, but only something special in the manner in which the feeling of absolute dependence is to be related to Him.”3 In other words, talk about God is, following Kant, simply talk about human experience of God that does not describe God-in-himself.

Te declared that the Bible is not an absolute authority but a collection of reports about the religious experiences of persons throughout antiquity. It is neither supernaturally inspired nor infallible, such that it could be wrong at any point and would necessarily be mistaken if it contradicted the generic or Christian Gefühl. Indeed, the New Testament, which simply contains the apostles’ reflections on their faith in Christ, “contained much in detail that had been misinterpreted, or inaccurately grasped, or set in a wrong light owing to confusions of memory.” However, by providing a record of the religious experiences of the earliest Christian communities, the New Testament possesses a certain “normative dignity” in furnishing a model for contemporary attempts to interpret the significance of Jesus Christ in various historical circumstances.

It is easy to go on, but one more — Christology: “He replaced the traditional Christology regarding the two ontological natures of Christ with a functional Christology based entirely on Jesus’s experience of God-consciousness. Possessing only a human nature, Jesus differed from the rest of humanity in just one respect: the absolute potency of his God-consciousness. As Schleiermacher put it, “The Redeemer, then, is like all men in virtue of the identity of human nature, but distinguished from them all in the constant potency of his God-consciousness, which was a veritable existence of God in him.”

You want more? Roger Olson, The Journey of Modern Theology

January 24, 2019 One Story From Genesis to Revelation (RJS)
Recent Comments
6 Comments | Leave a Comment
"This is a really weak take on DBH's arguments. I dont understand the impulse critique ..."
zech Reviewing David Bentley Hart
"So because 1-9 genesis referes to penis and then vagina. Therefore we can deduce that ..."
Jostein Syvertsen Yarhouse And Gender Dysphoria
"In some of the TTTE episodes pride goes before a fall crops up and that's ..."
Erica L Thomas the Tank Engine (Deconstructed)
"TTTE helped me learn to distinguish feelings, something I had trouble with as a kid. ..."
Erica L Thomas the Tank Engine (Deconstructed)
Browse Our Archives
get the latest from
Evangelical
Sign up for our newsletter
POPULAR AT PATHEOS Evangelical
1