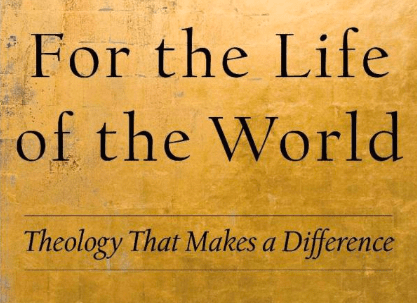 It’s a short book and chapter three is not a long chapter but it may prove to be one of the most enduring chapters one can read.

It’s flat-out that significant, or provocative — it depends where you stand.

Buy the book just to read this chapter over and over.

Miroslav Volf and Matthew Croasmun, in For the Life of the World, contend for the following major ideas when it comes to what theology is or what it ought to be doing today:

The heart of our proposal concerns the purpose of theology. It is to discern, articulate, and commend visions of and paths to flourishing life in light of the self-revelation of God in the life, death, resurrection, exaltation, and coming in glory of Jesus Christ, with this entire story, its lows and its highs, bearing witness to a truly flourishing life.

They recognize that how one articulates the flourishing life is diverse in church history and in the Bible itself. They are not seeking the one language that says it all. But here is a bold and powerful claim:

The subject matter of theology will depend on the basic character of flourishing life.

Until we comprehend what God’s design is we can’t know God or God’s redemptive work in Christ as we ought. Therefore, articulating the flourishing life shapes theology itself.

Second, Christian theology shouldn’t be primarily about the redeeming relation of God to the world, whether we mean by redemption forgiveness of sins or liberation from suffering and oppression, or both together. This is decidedly not to say that redemption isn’t an indispensable and central theological theme.

Notice what they are saying: theology is not first about God or about redemption. What is God’s redemptive work in Christ about: the flourishing life. Yes, God. Yes, redemption. But why? Flourishing.

They turn to Jesus and the kingdom of God.

The most basic and the most consequential conviction about the kingdom of God is the obvious one: it is neither kingdom alone (a world apart from God) nor God alone (God without the world), but the two together. The kingdom of God that Jesus proclaimed and enacted is a particular kind of dynamic relation between God and the world: it is “the world-with-God” and “God-with-the world.”

Human beings and the world come to fulfillment when they become in actuality what they have always been in intention: when God rules the world in such a way that God and the world are “at home” with each other— more precisely, when God comes to dwell in the world and when the world has become and experiences itself as being God’s home.

As the identity, proclamation, and practice of Jesus along with the images of the primal garden and the eschatological city suggest, God’s goal for the world and for humanity is not God. God’s goal for the world is the world—though not a secular world apart from God but the world with God as a residing “owner” rather than absentee “landlord,” the world having come truly into its own and flourishing by having become God’s home.

Yes, for sure, God is at the core.

If this account of flourishing life is compelling, then the subject of theology is not God, whether in Godself or as the origin and goal of creatures, but God as the creator and consummator coming to indwell the world and the world as God’s creation and God’s home. The purpose of theology is then to help human beings identify God’s home as their home and to help us journey toward it. The key aspect of the journey is redemption from oppression and sin.

Yes, for sure, redemption is at the core.

“Redemption” as a removal of a lack (i.e., of sin or of evil) is always a means, never the final end. Redemption helps us get where we are meant to be, but the vision of life established through creation and promised in consummation sets the destination; redemption is a condition of consummation and an effect of the consummation’s inauguration.

The revelation of that core is Jesus Christ.

Jesus Christ—in his person, his life, and his mission—is both the embodiment of God’s home among mortals and the promise of its full and universal realization.

In Jesus we see the intent of God in God’s revelation and redemptive work in Christ.

Why should Christian theology be about flourishing life and serve flourishing life? Because Christ came to call people to flourishing life. Guided by God’s kind of love and empowered by God’s Spirit, all of us are called to flourish fully in the world-becomeGod’s-home and partially on the journey there—rejoicing even while having to mourn, accepting lack willingly so that the needs of others can be satisfied, leading lives of courage and integrity as we struggle against the evils of this age, trusting and loving God, participating in God’s mission in the world, and in all this growing into our own human fullness.

April 22, 2019 Seminary: The Gift of Renewal (Tommy Phillips, Tampa FL)
Recent Comments
3 Comments | Leave a Comment
"Many would say “biblical” and that, like forgiveness said C.S. Lewis of forgiveness, is a ..."
Doug Croze What is “Evangelical” Theology?
"Even if imputation is in view it is not the imputation of his life but ..."
John Thomson The Gospel and Double Imputation
"Fear is something dangerous, and it can direct your um curso em milagres youtube life ..."
burakdeniz The Miracles of Creation? (RJS)
"If Wilson limits his theology to what scripture explicitly states (and he does), then isn't ..."
Robert Zeurunkl The Subordinate Place of Supreme Honor: ..."
Browse Our Archives
get the latest from
Evangelical
Sign up for our newsletter
POPULAR AT PATHEOS Evangelical
1

Do "Rights" Limit or Empower the...
Cranach
Related posts from Jesus Creed