Long ago I read a portion from a well-known theological textbook to a classical theologian who knows the Creedal tradition with expertise, and his response was “That sounds Arian, or at least very close to Arian.” 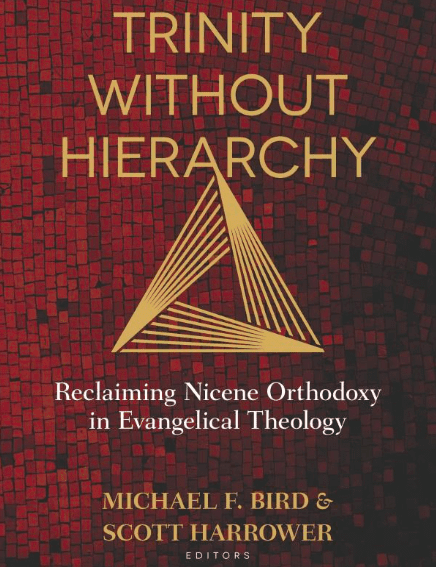 Michael Bird and Scott Harrower, in their new book Trinity without Hierarchy: Reclaiming Nicene Orthodoxy in Evangelical Theology, now have provided a collection of essays that both criticize what must be called a Complementarian sub-Trinitarianism (Bird picks a fight by calling them “theologians of a lesser Son”) and offer an alternative in the classical Trinitarian orthodoxy of the church.

Not that all complementarians adhere to this for they don’t — those blog posts by those surrounding Westminster Theological Seminary some time back made that very clear. But far more do than are known, some won’t even admit it publicly, while others are gathering over beers and brats to tell one another that they still adhere to what Bird will expose in this volume. Evangelicals are not as good at Trinitarian theology because too many and for too long they have ignored the great church tradition.

What is also clear is that the Grudem-Ware-Burk-Strachan line is now under very serious investigation, and it is a pity that their tribe is so tight that their theology remains under-investigated.

Bird and Harrower are ending the silence and are challenging the tribe. From Bird’s “Theologians of a Lesser Son” preface:

As far as I could tell [from his earlier forays into this subject in writing], Ware and Grudem were clearly not Arians;  they did not deny the eternality of the Son, they affirmed that the Son was of the same substance as the Father, and they believed in their own minds that they were orthodox Trinitarians. That said, their language of “subordination” certainly bothered me, but I erstwhile assumed that such scholars were using the term not in its actual sense, but as more of a clunky yet effective way of correlating the economic Trinity with the immanent Trinity and safeguarding the personal distinctions within the Godhead.

However, after reading and rereading several volumes by complementarians, where the language of subordination and hierarchy are championed, I am now convinced that Grudem, Ware, and others were arguing for something analogical to a semi-Arian subordinationism. The Trinitarian relations being advocated by such scholars are not identical to Arius, since proponents identify the Son as coeternal with the Father and sharing the same substance as the Father. In addition, I think it is fair to say neither are Eternal Functional Subordination (EFS) advocates pure semi-Arians, because they do not think Jesus is merely like the Father nor do they consider the Son to be the Father’s creature. Those caveats aside, they resemble a species of semi-Arianism, called “homoianism,” by virtue of three things:

(1) an overreliance on the economic Trinity in Scripture for formulating immanent Trinitarian relationships,
(2) leading to a robust subordinationism characterized by a hierarchy within the Godhead,
(3) consequently identifying the Son as possessing a lesser glory and majesty than the Father.

Problems abound with this subordinationist and/or quasi-homoian complementarianism view of the Trinity, not least in how advocates describe the theological lay of the land and map their own position within it. For a start, one wonders if it wise to divide perspectives into so-called “feminist” views of the Trinity in contradistinction to so-called “complementarian” views of the Trinity. I submit that this classification tells us more about the classifiers than it does about the status quaestionis in contemporary Trinitarian discussions. A historical taxonomy would normally refer to “orthodox,” that is to say Nicene-Constantinopolitan formulations, over and against “heterodox” positions, such as Arianism, Sabellianism, and Tri-theism. Going further, within orthodox Trinitarianism, one could opt to distinguish “Classical” from “Social” configurations of the Trinity. On close inspection, then, the description of “feminist” and “complementarian” views of the Trinity do not represent historical categorizations or even correspond to contemporary schools of Trinitarian thought. Thus, to insist on views of gender roles as the single criterion for classifying Trinitarian formulations is a strange move. It is also a categorization that is, to be frank, utterly bizarre in that it subordinates Trinitarian doctrine to a very narrow band of anthropology (i.e., gender roles); it even turns out to be a meaningless categorization when it is realized that complementarian and egalitarian advocates both can affirm a non-subordinationist Trinitarian theology.

June 3, 2019 The Theologian's Great Burden
Recent Comments
16 Comments | Leave a Comment
"'This renewal began first with the renewal of the people of God (chapter 5 or ..."
Kostya2 Putting the Bible Together
"In Christ, there is no Jew or Greek, male or female."
Silverwolf13 Go Home or At Home?
"I just started to read about Scot Mcknight! His arguments are good.However, I recommend Scot ..."
Yechan Namgoong Tim Keller under the Eye
"" if it be Your will" 1 John 4:14,15 says, 14And this is the confidence ..."
disqus_5T2jXBEN10 JesusCreed.org Blog Prayer
Browse Our Archives
Related posts from Jesus Creed