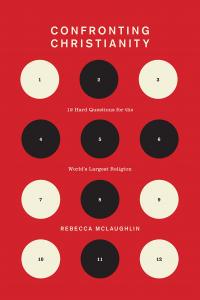 This is the next question addressed in Rebecca McLaughlin’s new book Confronting Christianity: 12 Hard Questions for the World’s Largest Religion. The question is reminiscent of the subtitle of Christopher Hitchen’s 2009 book God Is Not Great: How Religion Poisons Everything. There are many problems with the premise. The first and most important is that it groups all religions together under the same banner. The ills of one apply to all. This is like claiming that philosophy hinders morality without distinguishing the pros and cons of different positions; as though Marxism, Libertarianism, Rationalism, Nihilism, Relativism, and so forth, are all the same.

Here we would have to answer no. Now this isn’t to deny the fact that some people have used Christianity as an excuse for immoral acts. The history of the church is full of missteps and grievous wrongs as well as positive acts and developments.

Why is the answer no? First and foremost because of the grounding value of human life and human flourishing. According to Scripture humans are created in the image of God, a little lower than the angels with intrinsic value and a vocation to care for each other and the world. The greatest commandment after love of God is love for neighbor broadly defined. The command to love your neighbor as yourself runs through the New Testament and derives from the Old. A while back I wrote a post How Can You Be a Christian? working through many of the New Testament verses and have revisited the theme in a number of later posts as well. Few of us would view the themes here as immoral or destructive influences on society.

For many people in the Western world secular humanism is a foundational value. According to one website “humanism is a progressive philosophy of life that, without theism or other supernatural beliefs, affirms our ability and responsibility to lead ethical lives of personal fulfillment that aspire to the greater good.” Humans have a unique place in the world and a unique responsibility to face up to the consequences of human decisions. In conversation with N.T. Wright, philosopher Heidi Maibom provides the view that our ethics should be shaped by the desire to reduce suffering, human suffering and indeed the suffering of all creatures (you can find the conversation here). The reduction of suffering, especially human suffering, determines the ‘greater good’ toward which humans are to aspire.

Rebecca McLaughlin argues that atheism in unable to support the goal of humanism on any foundational rational ground. Human reason simply isn’t enough to get us to any declaration of human rights.

British political scientist Stephen Hopwood expresses pessimism about the future of human rights in today’s climate: “The world in which global rules were assumed to be secular, universal, and non-negotiable,” he argues, “rested on the presumption of a deep world-wide consensus about human rights – but this consensus is illusory.” Hopwood asserts, “The ground of human rights is crumbling beneath us,” and he predicts that as American global influence wanes and China emerges as the most powerful country in the world, concern for human rights will decline. (p. 64)

In World War II we witnessed (well before my time – but not my parent’s) atrocities on a massive scale, but this was not really unique. Anti-semitism, racism, imperialism, slavery, genocide, and conquest have deep roots in all human cultures. Inalienable human rights, accompanied by a definition of ‘human’ that encompasses all races and religions is a rather new idea. The ground is crumbling and secular humanism is not the answer to shore up the foundation.

Rebecca argues that for all the failures in the past (and these are not to be ignored) Christian faith does provide a foundation for universal human rights. It provides “a reason to dare to believe that ultimate justice is more than a delusionary longing in the illusionary mind of the collection of atoms you mistakenly call “me.”” (p. 74)

This is not an argument for the truth of Christianity – although some will find it a convincing line of thought, others will not. Just because we long for a foundation does not mean there is one. Wishful thinking is not a sure foundation. Others (and she cites Steven Pinker) hold out hope for a thoroughly secular grounding for universal human rights.

It is, however, a refutation of the claim that religion necessarily hinders morality. Many of the values we hold dear are, in fact, consistent with Christian faith and may have even originated from this cognitive environment because of, not despite, Christian teachings about human identity.

On what do we ground our ideas of morality?

How does religion hinder or promote morality?

Is there any absolute foundation for ideas of good and evil?

June 26, 2019 Ruth is not a Cinderalla Story
Recent Comments
13 Comments | Leave a Comment
"This article starts a series on what A Course in Miracles (ACIM) implies when acim ..."
burakdeniz The Miracles of Creation? (RJS)
"It is your confidence in these thoughts that needs pardoning and what causes absolution a ..."
burakdeniz The Miracles of Creation? (RJS)
"Scot, 1 Cor 16:15-18 asks the Corinthians to submit to the leadership of Stephanas and ..."
Richard Fellows Finishing Well With Clement
"I can only guess that they look at Trump as a kind of god like ..."
D.M.S. The Gospel of With Us and ..."
Browse Our Archives
get the latest from
Evangelical
Sign up for our newsletter
POPULAR AT PATHEOS Evangelical
1